Difference between revisions of "Southoak"

Southoak is a town in Southwest Epsilon, in the Region of Lumeva, Republic of Epsilon, currently 500 blocks away from the Epsilonian border, with expansion plans of up to z=18200, founded by ktkren777 on the 28th of November 2019. It is located around 500 blocks south and 200 blocks west of central Peacopolis and 2 stations away from Foresne. It has direct connections with these two towns using the FLR R1 Line from the Central District, and to the A53 via the B531 to Peacopolis.

Southoak is branded as the IKEA© of Lumeva, as it plans to make itself a place to relax and enjoy life, while not entirely forgetting the busy and bustling city life from neighbouring Peacopolis.

- In fact you can take Southern Line to SW6 (Foresne), go up to liveray, take Line R1 Westbound and end up at Southoak.

History (it's not real please don't think it is)

(In the story, MRT server is located in Northeast Asia, a vast archipelago south of Okinawa and east of Taiwan, with the main island being MRT)

Neo-colonialism had just swept the world by storm, and European empires were having their territories secede or separate from what used to be their protectors and guardians. The poverty-stricken colonial civilisation of 南橡 (nán xiàng) or Nanxiang, which directly translates into its modern name, was no different. The British Empire, to the people, had merely just pillaged the land, treated the people like utter scum, and ran off with the goods for trade revenue. In the end, after a bloody riot, the country seceded and changed its' name to Southoak in order to try to erase some of the bad memories that were stuck in their heads for so long.

The land was acquired by the MRT Corporation, which later turned into a full-fledged sovereign state in 2012 when Frumple took over the helm. The people of Southoak were in favour of this decision., but still continued to suffer under poor living conditions for 15 more painful and excruciating years.

PeacemakerX5 was travelling on the newly built Southern Line, and saw a civilisation at SW8. He had already been assigned to redevelop the plains above SW8 into a city of his own, to better connect that corner of the world. He saw the civilisation and took pity on the bloodshed that once was, and took the land for future redevelopment. A few attap houses were changed into modern houses, and people started to see hope once again. They celebrated at the hills together, and ate at the Delights Café he opened up as a quick shack to bring comfort to the locals.

PeacemakerX5 was very busy with developing his new city, Peacopolis, and it was developing rapidly, and Southoak couldn't hold up its' big brother up north anymore. He gave ktkren777 the responsibility of completely changing the town, and he quickly got to work by demolishing and relocating people to the first residential district of Little Kyoto. The financial district, split into two parts and called the Central District and Central District 2 quickly gave rise to new and more professional jobs for the people, including being office workers in the corporate world, being entrepreneurs and establishing new franchises around the city, and working in the service industry for the people by being doctors, nurses, lawyers, firemen and restaurant staff etc. Southoak is now a prosperous area where people flock to for business purposes, and also for a getaway from the bustling city life of Peacopolis. People that once had no access to food or even potable water and sanitation, now experience state-of-the-art public transportation, business venues such as world-class convention centres and stock exchanges, boasting some of the best in the region so far. It is certainly safe to say that Southoak has come a very long way. As the locals once used to say before 1990, Our spirit stronk. 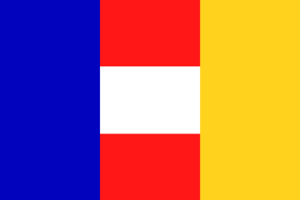 The flag of Southoak is one that represents the ideals of the people.

WHITE: THE PURITY OF THE PEOPLE

YELLOW: THE HAPPINESS AND PROSPERITY BLESSED UPON THE PEOPLE

And always shall our spirit be ever so stronk.

Every sector is divided into several more sub-sectors for ease in navigation, mail and organisation in the city hall. During elections, however, ballots are collected through sectors themselves, and there will be a central voting collection point at each sector. Sectors are numbered and sub-sectors sequenced in Latin alphabet.

This sector has the Southoak Convention Centre as its major highlight, with the SkyHigh Hotel and Convention Centre Management Office. The Watersports Academy is also in this sector. It is also home to the Mayor's Residence, Sakura Park and the famous Spruce Bridge, on a exclave island of what used to be Peacopolis. This also houses some tourist information offices and the welcome centre at the narrow but long chunk of land situated south of Southoak Convention Centre. The MRT Station [SW8] is located here, and up to the right of the exit is the Terra Bridge, named after the land and water it mountains over.

This sector will essentially be the heart of the town. The Southoak Holdings Towers, often nicknamed "Cyan Towers", holding to its colour, and the Southoak Stock Centre (SKX Centre) are located along Twin Road, leading up to the Southoak CBD Station, where nearly all transport links to the town terminate. This station is served by FLR, a subsidiary of NewRail, and Southoak Railway Service. Southoak City Hall is also located along Waterway Road, with the futuristic blue and red wings representing the waterways and prudence, and brotherhood and power respectively.

Neustadt is a place of prosperity and hope, with new skyscrapers being constructed every day. Its connections with the rest of Southoak lies with future bus routes 6 and 7 and the Neustraße Station  FR4  WO4 . The Canon Recording Studios Tower is situated here, along with other important buildings such as the F1 Motorsport Home of Southoak, the Technology Research Office and the Gregory Meteorology and Geography Centre of Southoak. Some of the buildings that ktkren777 is most fond of are situated right here in Neustadt. On Express Rd is the connection to the B531, the major road in and out of Southoak driving up to Peacopolis and with plans to connect further to Tedville and the A53.

It is the only area that actually majorly flattens out land before developing the land, following the Peacopolis Method of Development - Mojangitis. It is the one area that dominates the skyline everywhere in the city, with y-coordinates extending up to y=210.

This sector has the dubious award of being the largest sub-sector in Southoak at the moment. Yay!

This sector is an extension of Sector 1b. Situated here is the Blue Bridge. Often, decorations are hung on the bridge for prosperity during every festival. The famous wework Tower, housing Ted Industries and Peace Enterprises for now, also has some more space up for grabs, with tailor-made offices at your disposal. The Southoak Executive Bank, with famous wrap-around green glass to represent the prosperity and blessings you receive upon entry, is to the right of the wework Tower. There are plans for the Foresne Embassy and the FlyLumeva Southoak Headquarters to be constructed by 15 March, 2020. The Stone Brick Wall with a semicircular river entry also situates here, as a part of Southoak's heritage, described in the Heritage Gallery behind the wework Tower and the Bank. There are plans for this sector to be served by the Southoak Metro - Northeast Region Line Stn 1, a shorter but higher demand line for the metro in order to connect the current bustling Financial Districts.

This sector is under construction. There are two structures here, a transport museum and the Energy Co. of Southoak Headquarters. What used to be a granite quarry has now been converted and renovated into a shallow lake with tropical fish and some corals being the major highlight. The Bricklake Country Club and the Integrated Recreational Centre of Bricklake are placed here next to the lake for tourists to enjoy. This sector is served by the Southoak Metro - Forest Line Stn 1. The Forest Line will, in future, connect the whole of Southoak together as a long and high-demand line for residents to commute north to south.

This sector is the epitome of landed housing in Southoak. With some Japanese inspiration, this contemporary village is what to expect for housing in the future, with common areas for socialisation, urban farming, and exercise. This ensures sustainability of the housing in Southoak. The architectural style is mostly neo-modern, with naturalised Southoakers from Japan and China bringing their cultural heritage over to our land, and thus influencing this district heavily. It is named Little Kyoto because of the inspiration it takes from the city. This village is served by the Southoak Metro - Forest Line Stn 1. The only significantly different change in style is in the Kleinsburg-Style Modern House and in the Semi-Detached Suburban House, as immigrants came over to settle the land, thus making Little Kyoto a very diverse place, despite it being named after such a homogenous nation and city.

Öst-Pfannenstiel is a future district just east of the Southoak City Hall, where a progress landmark is set to be, and also the site of the Oakring, a motor racing circuit that is planned to hold the Lumevan uCar Grand Prix in this coming August. The details are yet to be confirmed, but tickets will be priced at MRT$1 and licenses to race for this year will cost MRT$6. A total of 20 drivers are allowed to race in one event. This will be a tourist hotspot along with Bricklake.

SParks is a subsidiary of Southoak Holdings and 51% of its shares are owned by it. The remaining 49% is owned by Southoak City itself. It is responsible for the maintenance and creation of new parks around Southoak, and was created on 21 May 2020 in response to Vulpine_Master's feedback to me about my Senator Application. There are currently 5 parks around Southoak.

Services 1 to 5 will all have the origin of the Future Öst-Pfannenstiel Bus Interchange and Depot in Sector 2a. All these services are planned and will use the warp signs to facilitate faster transport. These services are expected to be in operation fully by 1 June 2020. Buses that do not operate on a circular route have a return service from its destination to its origin.

This is the parent company of

Southoak Cafés and Restaurants (tailor-made to your expectations)

Contact me in-game (when i'm online, my time zone is GMT+8) and I will set you a reasonable price for the things that I build for you (assuming you want it). Prices are negotiable with the strict condition that you are reasonable. I need money :(

Credits (or any "stolen" buildings)

On the info board at SW8. (for simplified information)

PeacemakerX5, who helped me out with many things in the town in general.

Thats it. I'm serious, the rest have either permission or like online designs irl so i don't think that would count as copying :P.