Difference between revisions of "Spruce Valley"

NOTICE: This page is very outdated and will never ever be updated anymore, kthxbai Spruce Valley was founded on the 9th november 2016 by SubwayGamerMC and it is located at  T41  Foobar
in the great taiga biome.It was also is a member of TRONC. The town was taken over by Johngi on the 2nd of June 2019, when it joined the People's Republic of Montego

1.Station District In this district, most of the buildings are in "functional" style with very few detail, made out of bricks and stone. You can also see a few modern builds in this district.

Here, there will be all the City Administration buildings. The building style in this district is old european.

Spruce Valley has an extensive metro system designed to serve all of the city. Currently it has 2 lines. It is one of the only metro systems that run using warptrains. Map: 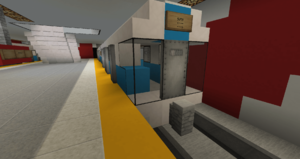 SVTA Buses is the main Bus Operator in Spruce Valley. It is planned to have many routes under it's wing that serves Feeder routes and Trunk routes to other towns. Buses are supplied by Voltorb Buses of an Articulated type. They have yet to be delivered and put on revenue service.