The Mole is a game show in which players must work together to complete various physical and mental challenges to build up a significant cash prize for the winner, originally from Belgium. One of the players, however, is "the Mole", a double agent hired by the producers to sabotage the efforts of the group. The Mole must be careful to avoid drawing too much suspicion to themselves. Players must track vast amounts of data about the person(s) they suspect of being the Mole, such as seating positions, clothing colors, minor discussion topics, and so on. The quiz at the end of each episode tests players' knowledge of the Mole and determines by lowest score (or slowest time, in the event of a tie) who is eliminated from the game.

Players are eliminated, known as an executed, at a location where all the players are staying, usually a manor. Players, depending on the season, may decorate their room or personal area. These areas were later designated with red to signify if the player had been eliminated.

The franchise was officially announced as concluded on October 5, 2020.

Each installment of The Mole involves several players, ranging between eight to 18. During each episode, the players participate in several challenges, each assigned a monetary value. If the players, as a team, complete the challenge, that money is added to the final prize for the game. However, one of these players has been selected by production to be the Mole; it is their job is to try to prevent the other players from winning challenges without revealing themselves to others. The Mole may be told ahead of time how to do sabotage and what challenges to expect, while at other times the Mole must decide whether to intervene or not.

At the end of each episode, the players take a quiz regarding the identity of the Mole and his or her involvement in the previous activities. The player who scores the lowest on this quiz, or was slowest to answer in case of a tie, is eliminated from the game. The winner of the game is the one that answers the most questions correctly on the final quiz given when only three players are remaining (including the Mole) and is awarded the total amount of money won over the course of the game.

While success in the challenges is important to build up potential winnings, it is also critical to stay in the game by scoring better than opponents on the quiz, usually by attempting to draw their suspicions of the Mole's identity toward oneself. Since the Mole must use subterfuge to misdirect attention from their attempts to derail the team, disingenuous attempts to emulate the Mole must be subtle, while still noticeable and suspicious.

The players typically know the cast list before the game starts. Each is also allowed to take notes, which is the only place they are permitted to record information and thoughts about the other players.

Some players form "coalitions" with other players, ostensibly to share theories and observations about the other players. Some players attempt to cause others to believe that they are the Mole, on the premise that believing the wrong person is the Mole will result in them having poor quiz results. 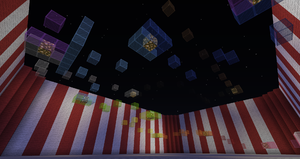 In the challenge "Teamwork Relay" from season three, players had to complete parkour in a relay-style race against the clock.

Each challenge generally has a reward towards the group pot for various levels of success, diamonds from seasons one to four and server money from season five onward, due to the addition of the economy plugin on the server. On occasion, a challenge will have a penalty for failure. The challenges comprise a wide variety of physical and/or mental challenges posed to the players. Most are straightforward, and the rules are fully explained to all players. In some cases, however, a challenge is not fully explained to all players, increasing its difficulty. In those cases, perhaps only selected players are informed of the full nature of the challenge and must work towards a different goal than the rest. In rare instances, there are secret challenges that only one, or none of the players are aware of.

Challenges are sometimes entirely physical, or entirely mental, but usually have elements of both.

Some challenges require every member of the team to complete their task for the team, while other challenges award each player that finished, regardless of the others. A common requirement is for the team to divide themselves into groups based on given attributes (e.g., "leaders" and "followers") before they learn what the task is.

Secret challenges may include "morality tests," where the players might be unexpectedly approached by a local (secretly arranged by the producers), for help (i.e., change a tire, etc.) The players would later be informed that they won or lost the challenge depending upon if they helped the person in need.

Unlike challenges in other game shows, the ones seen on The Mole offers players ways to disrupt the game, as well as ways of disguising their betrayal.

In addition to challenges, violations of the game's rules by a player, such as going out after curfew or talking about a forbidden topic, can result in a deduction from the group pot as a penalty.

Failing a secret "morality test" may also warrant a penalty. 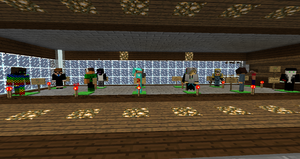 Players and substitutes stood on spots during the elimination ceremony during the first episode of the second season.

The quiz is the primary device for eliminating players. After all the challenges, all players (including those exempted from execution, starting in season three) complete the quiz in private. The Mole also completes the quiz to avoid suspicion. Traditionally between ten and twenty questions, except for the final quizzes, the quiz asks the players to identify the Mole and several pieces of information regarding the Mole, including the Mole's activity in challenges, biographical profile, their actions during the show, etc. The player who has the lowest score on the quiz (and taking the longest time to do so, in the event of tied scores) is eliminated from the game in an "execution" ceremony and is said to be "executed by the Mole."

The Mole is always safe from execution and is guaranteed to be involved in the game until the very end, though they cannot win.

A standard elimination checks each player's status on whether they will continue to the following episode. The host says each player's name, in no apparent order, one at a time. In most seasons, an obsidian screen shows a green screen to signify that they are continuing or a red screen to show that they have earned the lowest score.

From seasons one to four, the execution ceremony consisted of the players on top of spots surrounded by redstone dust. Since then, players are instructed to sit in chairs to wait to be called up to stand on some sort of platform, except in season seven, where players could fly or stand in a designated portion of the elimination room.

Throughout the season, players may earn advantages that may give them a higher chance of avoiding elimination.

Players are sometimes awarded an Exemption from execution. An exempt player receives a free pass to the next round during that episode's execution ceremony, and can not be eliminated, regardless of their quiz score. Depending on the season, exemptions may be scarce or abundant. Once awarded during gameplay, exemptions are announced publicly to the group and are otherwise not considered secret during the execution ceremony.

Exemptions are usually twists in the game. In some cases, exemptions are awarded to a single player for an exceptional effort or performance during that episode's task. Sometimes the exempted player is chosen by the group, whether intentionally or unintentionally. Other times, the exemption comes in the form of a temptation to not complete a task and forfeit diamonds or money for the pot; or as an unexpected consolation prize for failure during a task.

In frequent cases, the exemption is a secret element to an episode's game, revealed only to the player(s) eligible. One or multiple players may find themselves surprisingly eligible to receive an exemption by carrying out simple, honest, coincidental acts such as offering to share a room with a player. Likewise, that player's ploy to achieving the exemption is often unbeknownst to the other players.

Season seven gave the opportunity for players to have a question that was answered incorrectly on the quiz will be counted as a correct answer. This has only occurred in season seven.

Players may receive hindrances that may make it more difficult for a player to advance.

On October 5, 2020, MinecraftYoshi26 announced that the franchise had officially ended after seven years. Following the announcement, he revealed that the reason for the cancellation was due to the amount of time and effort goes into planning a season and his lack of enjoyment in hosting the show. Previously before the franchise's revival from an official hiatus following the seventh season, he stated that he felt the show's newer seasons felt formulaic and the show was "beating a dead horse".

It was revealed that prior to its cancellation, an eleventh season was in very early pre-planning stages with some format changes being developed. The eleventh season's working title was The Mole 11: All-Stars, with the season having an "All-Star" cast of selected contestants from prior seasons by MinecraftYoshi26. To accommodate for newer players who were unable to participate in other seasons or individuals who did not make the cut, there was going to be a format change with the audience participating, under the moniker "The Audience", for a cash prize alongside the contestants. Additionally, each elimination for the season would have been held at prior Mole Manor elimination locations. Early guaranteed invitees onto the cast would have consisted of Skelezomperman, KittyCat11231, RacCort, DeevyDeev, _Kastle, autobus22, mine_man_, daltdisneyland, and ArizTrad. The season would have been the series' planned final season before an official cancellation.