Difference between revisions of "The War on Communism" 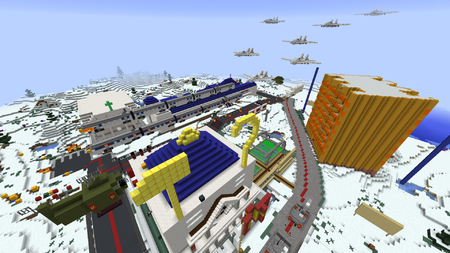 One of the few screenshots from the first battle against communism 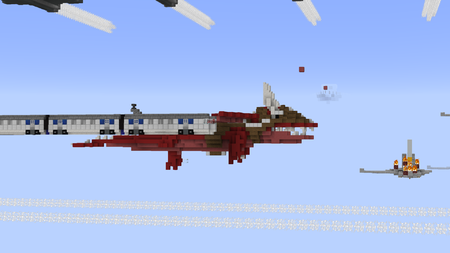 The War on Communism is an ongoing war on the USSRGRAD, ruled by BrokenKidney and supported by Kel5. The following forces are allied against USSRGRAD:

On Jan 19th, 2018 (Moramoa Official Time), members of the MRT noticed the rise of the USSRGRAD. At some point in the day, woorich999 made the first strike against BrokenKidney, approaching from the south-west. Moramoa Mayor megascatterbomb provided a garrison of troops to support the offensive from the north. woorich999 had paid for tanks, although they could not be air-lifted in due to the lack of staff on the server at the time. For some unknown reason, hvt2011 decided to support the communist forces, leading megascatterbomb to sanction his actions. BART later provided air support.

The battle ended when all of the allied forces withdrew so Pearl Coast could drop a 50 megaton Nuclear Intercontinental Ballistic Missile on the town hall. BrokenKidney had at this point abandoned his troops to meet up with incoming reinforcements, whom assisted him in rebuilding the USSRGRAD.

On Jan 20th 2018, BrokenKidney attacked Richville in a counter-offensive, causing massive damage to several buildings. Richville Military fought hard to defend, however they quickly were overrun. This allowed the communists to establish many military defenses, especially around a bridge owned by BluRail. The Atlantis Defense Force was the first to respond to the incident, providing air support. Moramoa pushed on the ground with their newly manufactured tanks. Soon, KIA armed forces joined the battle with a 36-man squadron of fighter jets which attacked the heavy vehicles near the BluRail bridge, allowing Moramoa's tanks to advance. This push by Moramoa was soon halted, however, as a small group of soldiers managed to take over a partially damaged tank and turn it against the Allied Forces. The KIA stopped this tank from attacking more than what was in front of it, although concern over more hijackings lead megascatterbomb to establish a mobile command center off the main street of the battle, to protect the on-site commanders from the direct line of fire.

After some time, BART, Tranquil Forest and Kessler forces showed up to assist the Allied Forces; the latter of which consisted of multiple dragons. The attacks from BluRail Military Trains secured the bridge, while BART flanked from behind. Richville military decided to launch a counter-counter offensive on USSRGRAD, claiming the town hall for himself. The battle ended when Tom_Pairs, the main mode of transport for all the vehicles, left for the night. A few dragons destroyed what remained at the scene.

This section details the political situation in Victorian City, the minor skirmish in New Southport, and the preventive measures taken by Mons Pratus since said skirmish. All of these events took place on the 22nd of January 2018 Moramoa time.

The Port City of Victoria experienced a political shakeup and is on the edge of civil war. The Ultra-nationalist Party wants Victorian City to become communist and be allied with the USSRGRAD. The Loyalist Party wishes for Victorian City to remain captialist. As a result, a standoff is currently taking place, with the front line being just outside the Covina embassy. Richville Military Peacekeepers are also on the scene, to assist the loyalists. Mayor MC_Protocol has stated that he sides with the Loyalists.

At a similar time, the small settlement of New Southport, owned and controlled by ModernArt, was plunged into battle by BrokenKidney and Kel5. Not much is known about what happened here, other than SilverBubble's and Tom_Pairs' presence at the skirmish. Not much has been recovered from New Southport since the battle, since the ADF used four nuclear warheads on the town. Since BrokenKidney and ModernArt are now enemies, concerns have risen about a potential battle in Ashmore, a town owned by ModernArt located at A3-ZN3. These concerns have lead Skelezomperman to close the borders of Mons Pratus, and bring in a number of KIA warships for support.

The Peoples Republic Of New Southport

A Sudden Turn of events

On the 28th of February, 2018 at approximately 21:10 PST, USSRgrad's state broadcaster, GBC reported that there was currently a fascist revolt occurring in the north of the city near Lake Mare. At this point in time, damage has happened to a few buildings, and the city is currently under a curfew. All residents must stay inside, as the current government handles the situation.

An End To The War

A Sudden Side change

During the more recent parts of the war, the communists had Minecrafter_11 on their side. However, in a recent turn of events, and after the creation of the Nauvis Armed Forces, Minecrafter decided to play the side he really was on. Up till that point, Nauvis had been at the mercy of the army of USSRGrad. With the creation of the NAF(Nauvis Armed Forces) however, Minecrafter was able to fight for freedom. He built the NAF Nuclear Division, in charge of manufacturing and launching NAF missiles. Now, with Minecrafter proposing a new treaty for peace between Nauvis and USSRGrad, he is assembling an ARMY OF ARMIES, Operation Solo Wolf. If USSRGrad rejects Nauvis's perfectly reasonable treaty, then the combined might of all those who would be rid of communisim on this server. He has until 9pm (PST), April 9th to respond.