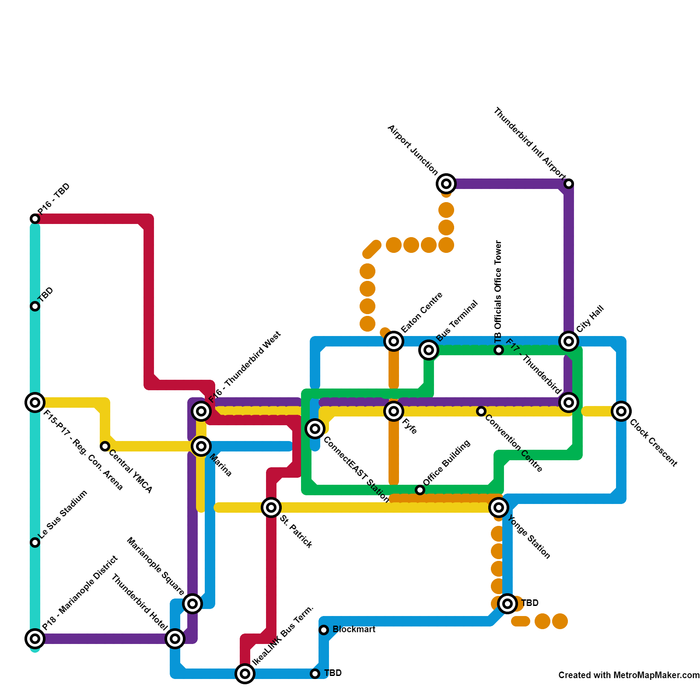 The map of the TTC metro as of August 22, 2019.
Please note: on areas where there is development underway, especially north and south of the city, subway alignments are subject to change.

The  G  Green Line of the TTC is a circle shaped line. The line serves the Old Town district of Thunderbird. Status:

The  Y  Yellow Line is a TTC line planning to serve 4 districts. Status:

The  B  Blue Line provides service to areas part of the Thunderbird Transit Centre. Just like the  G  line, it also plans to be a circle-shaped line. Status:

The  R  Red Line is a currently planned TTC line under construction. It plans to serve the New City District in West Thunderbird and the Thunderbird International Airport. Status:

The  O  Orange line runs on Thunderbird's spine (roughly down the middle) with the top bending toward the DElevator Centre (basketball arena, future official landmark). All stations on the line may be interchange stations. Status:

Good service with about 3 planned stations.

The  P  Purple line is a unique line because its technology is similar to the other 4 lines, but conserves the carts that are used within the line rather than burning them. This line provides express service to 3 Thunderbird MRT stations, City Hall, Marianople Square and the Thunderbird International Airport (TBI). Status:

There are 4 terminals, with 7 gates available at the Thunderbird Bus Terminal.

These routes are planned for the future, probably at least one route will be operational by mid- or late 2019 - Thunderbird still needs to increase in size.

These rail lines serve (or are planning) to serve Thunderbird.

Fun fact: The Scarborough RT line is also a real Toronto Transit Commission line! The line number of that is 3.

Older stations utilize this simple automated version of the TTC. The system includes a dispenser capacity indicator, a system that prevents dispenser from working when a cart is present in the station. This, however, does not function as intended 100% of the time; carts must go through the detector rail in order for the anti-dispenser circuit to kick in. 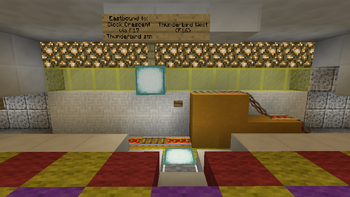 This version of the TTC is an enhancement of version 2.0; it includes all the features of v. 2.0 but also addresses the issue of possible dispenser spamming; it has a separate comparator circuit in which it activates when the pressure plate is triggered by a customer and must be given a few seconds before allowing the dispenser to function again. This is indicated by the "Ready to dispense" light. This system is also used in the ConnectEAST station bays (such as the Scarborough RT).

Version 3.1 also has an additional departure bay prior to entering a station to prevent trains from colliding; this also helps accommodate more customers safely. Version 3.1 is more noticeable on some stations south and west of  F16  Thunderbird West station. 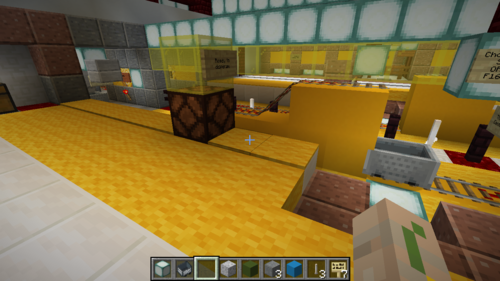 TTC v.3.1 including a signal system to stop an incoming train. A minecart is present in the station, while one is stopped in the tunnel ("STOP" indicated by redstone torch).
Retrieved from "https://wiki.minecartrapidtransit.net/index.php?title=Thunderbird_Transit_Commission&oldid=151680"
Category: