Tri Cities Transit is a public transportation system in Antioch and Bay Point. It operates bus services and is managed by the Metropolitan Transportation Commission.

Tri Cities Transit was formed in 1992 from the merger of three previous transit agencies: The City of Bay Point Trolley, Antioch City Bus, and Northern Regional Transportation Authority. The City of Bay Point Trolley was formed in 1943 as a city-owned bus line shuttling passengers between Bay Point Ferry Terminal and the Downtown. Antioch City Bus was created in 1958 after the city of Antioch bought out the then-Bankrupt Antioch Streetcar Lines who ran in the region from 1892 till it's buyout in 1958. The Northern Regional Transportation Authority (NRTA) was formed in 1983 after the surrounding suburbs around Antioch grew steadily in the years before, the system was set up by the then newly created MTC who was formed to solve the region's gridlock and deteriorating transportation infrastructure. The NRTA had operated the local routes in Peripotamia and the regional express routes from Peripotamia and Takasaki to Antioch and a route from Antioch to New Acreadium. The three merged together as a plan from the board of the MTC to create a unified transit system for the region. In 2013, Tri Cities Transit began construction on a new Bus Rapid Transit corridor from the University of Antioch to New Acreadium. 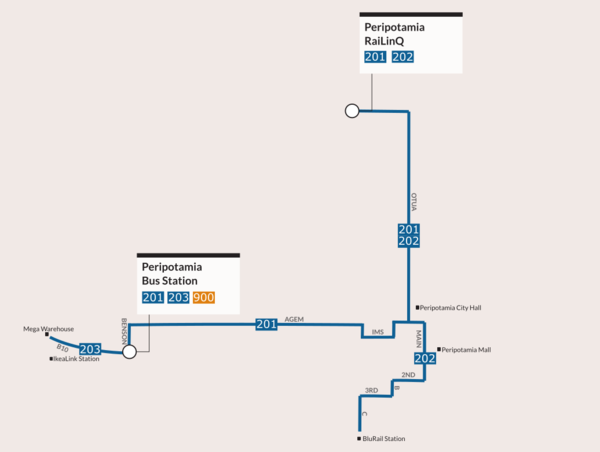 Map of Bus Service in Peripotamia
Retrieved from "https://wiki.minecartrapidtransit.net/index.php?title=Tri_Cities_Transit&oldid=149135"
Category: