Difference between revisions of "Tube map" 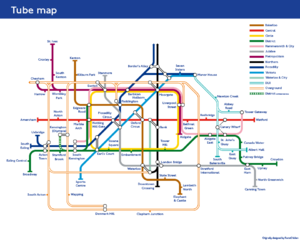 Below is a repository of all of Boston's tube maps for its various transit systems. It shows the evolution of the system.

The UERB, who bought out most urban railways in Boston, designed the first joint-line map in 1902. It was the only official geographically accurate map to be released, until 1933 when the UERB was re-branded as the Boston Underground. 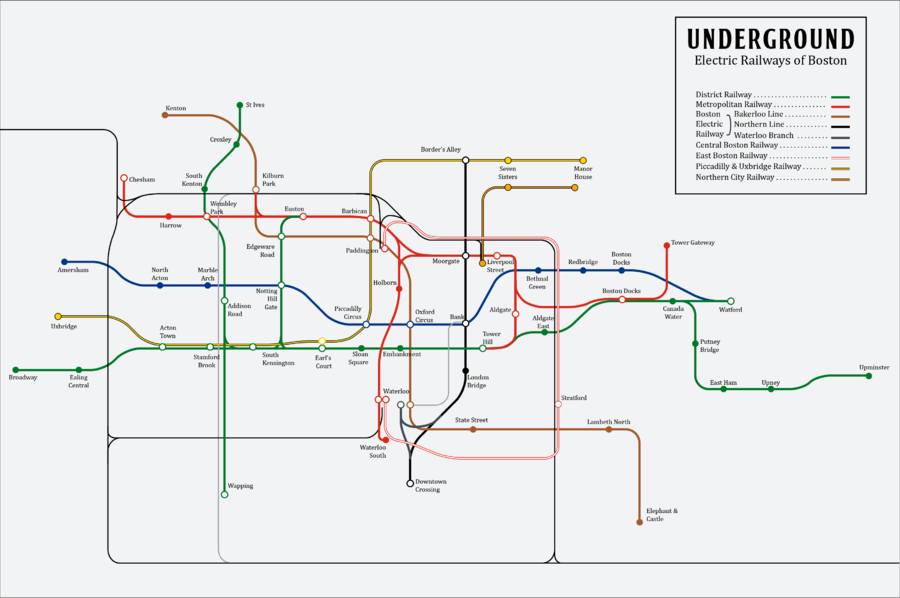 The 1933 map, the first official tube map, was the first to condense the lines into a non-geographically accurate map, allowing easier navigation for the rider. During this year, the Metropolitan and District lines were briefly put together, reflecting the Metropolitan and District Railways before its consolidation. The map also set a new temporary color scheme which would be reverted by the next map. 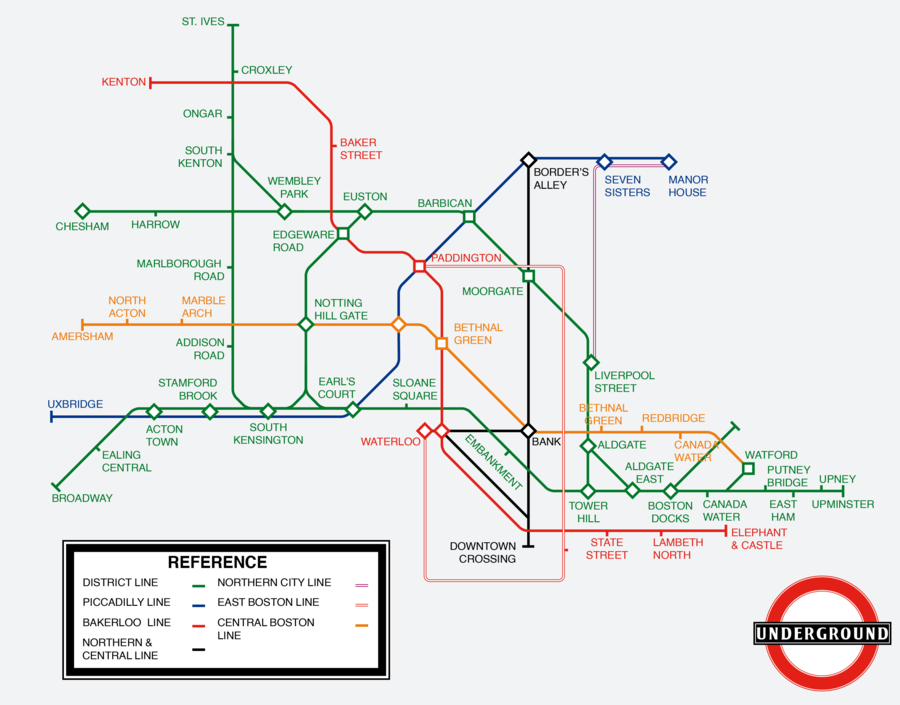 The 1934 map saw a number of revisions from mistakes made in the original 1933 map, and a few changes, most prominently the lines and their representation. Service on the Metropolitan line between Wembley Park and St. Ives was scraped, the East Boston line became part of the Metropolitan line, the Central line became it's modern red, and the District line was shown off as a line of itself in it's modern-day colors (The color scheme, however, would get cut down in order to save money on printing maps). 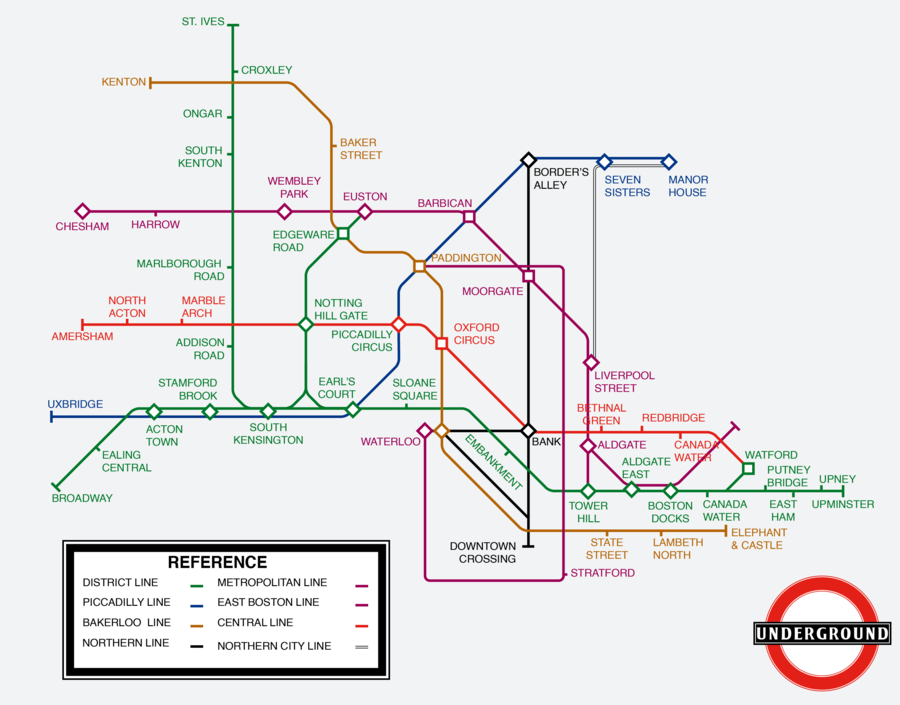 The 1938 map was the first tube map that changed the routing layout for simplification, mostly by changing the lines around Moorgate. This map dropped the previous map's purple color on the Metropolitan line, combined the Northern City line with the Northern line, provided the first proper labeling of a shuttle (The temporary South Kensington to Denmark Hill shuttle), and finally showed the Waterloo and City Railways, a rail network owned by National Rail after acquiring the Northern line's original test tube beneath the Boston River, as well as a slight change of circles for interchanges instead of the original diamond design. 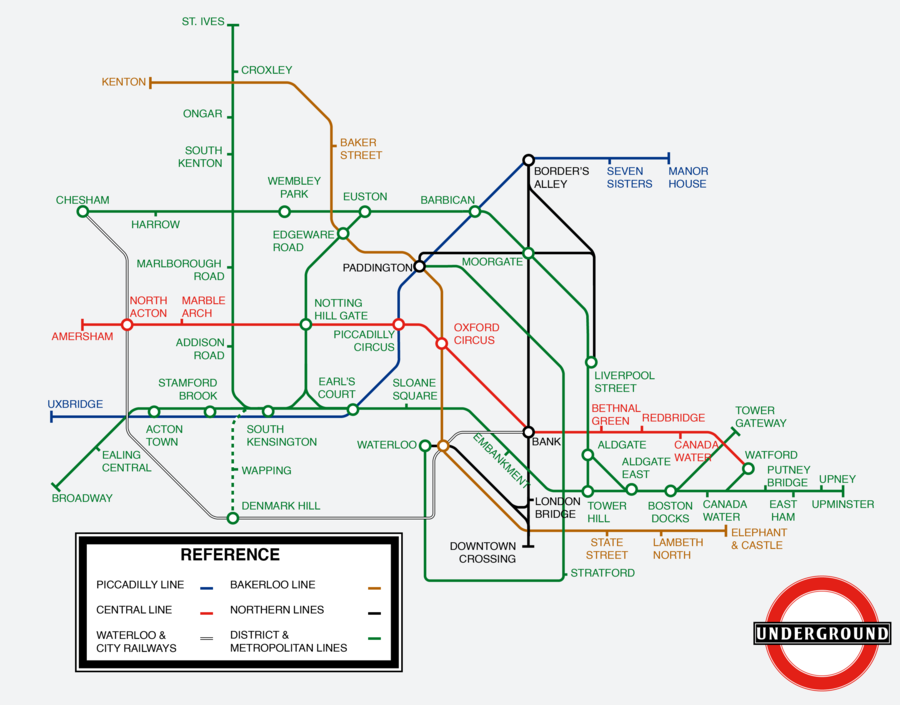 The 1943 map was the last map printed by the Boston Underground before it's inevitable control by the government. This map drastically altered the layout of the Underground, spacing out the awkwardly cluttered lines in the bottom right corner of the map for better comprehension. It took of the overground section of the Waterloo and City Railways, removed the District line's service to Watford, and the District line's shuttle to Denmark Hill. 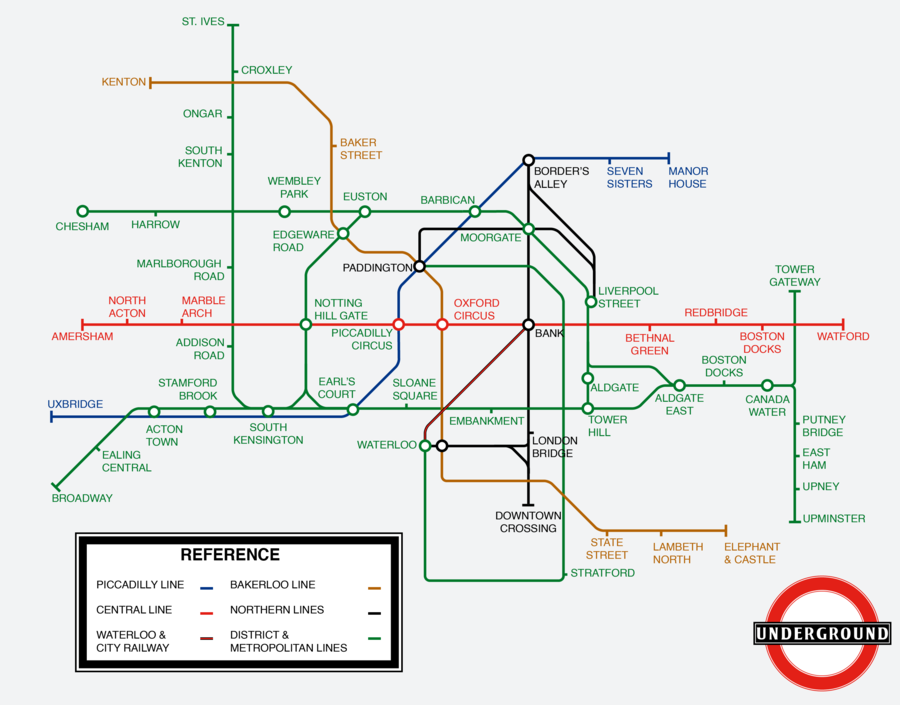 Following Boston's reform after a small civil war, the tube map was redesigned into it's 5th incarnation. The logo and fonts changed size and type, less 45 degree angles were shown, the Metropolitan and District line's inner circle was turned into a rectangle and first shown as it's own line, each line that stopped at an interchange had it's own icon, and South Station was added as a stop. 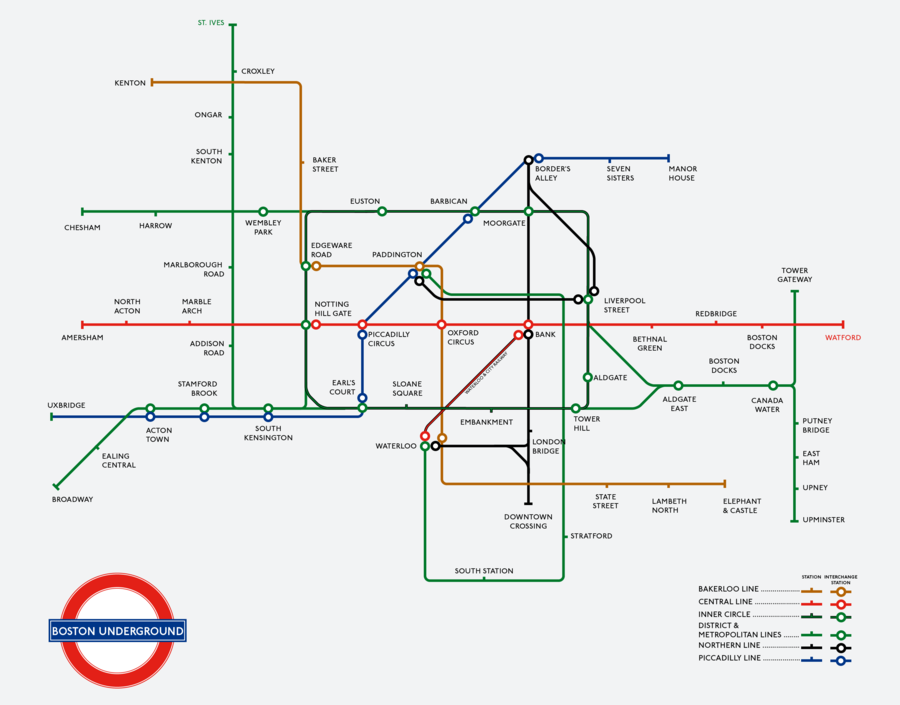 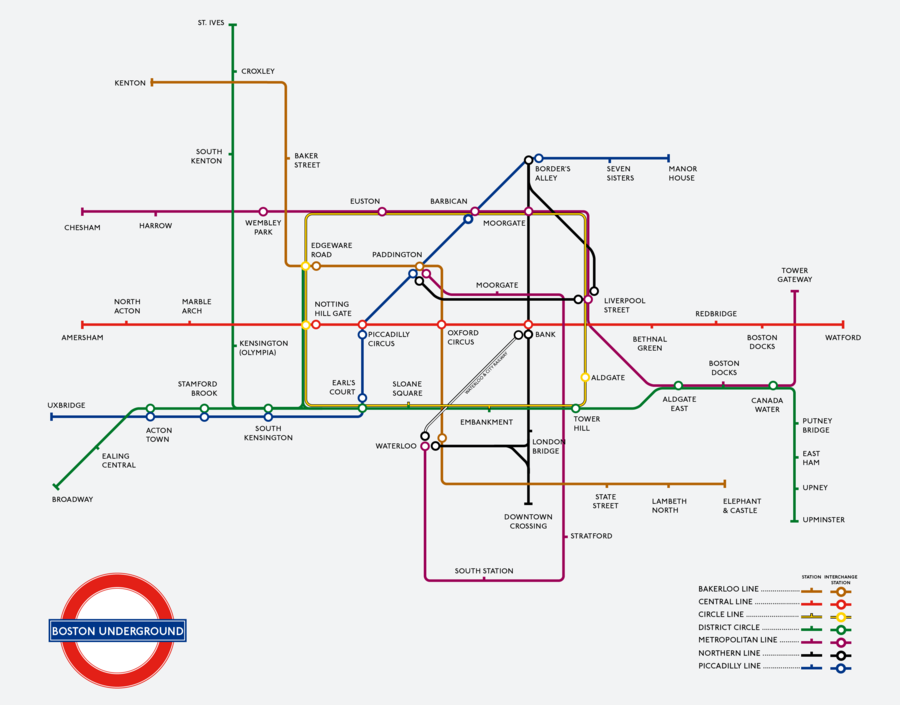 The 1968 map was the first reflection of change on the Underground after almost two decades. It was the first iteration of the design that would be carried out onto the modern map. Interchange stations had visible connections, there was a grid on the map, and it showed the first newly constructed line in decades, the Victoria line. Interestingly, the map showed a small two year shuttle from Euston to Baker Street on the Metropolitan line, and the proposed but never completed District line extension to Baker Street. It also cut the St. Ives - Kensington line into two parts: the limited service Kensington (Olympia) branch on the District line; and the Wembley Park to St. Ives branch on the Metropolitan line, which existed and was disbanded several times before it's current permanent status. 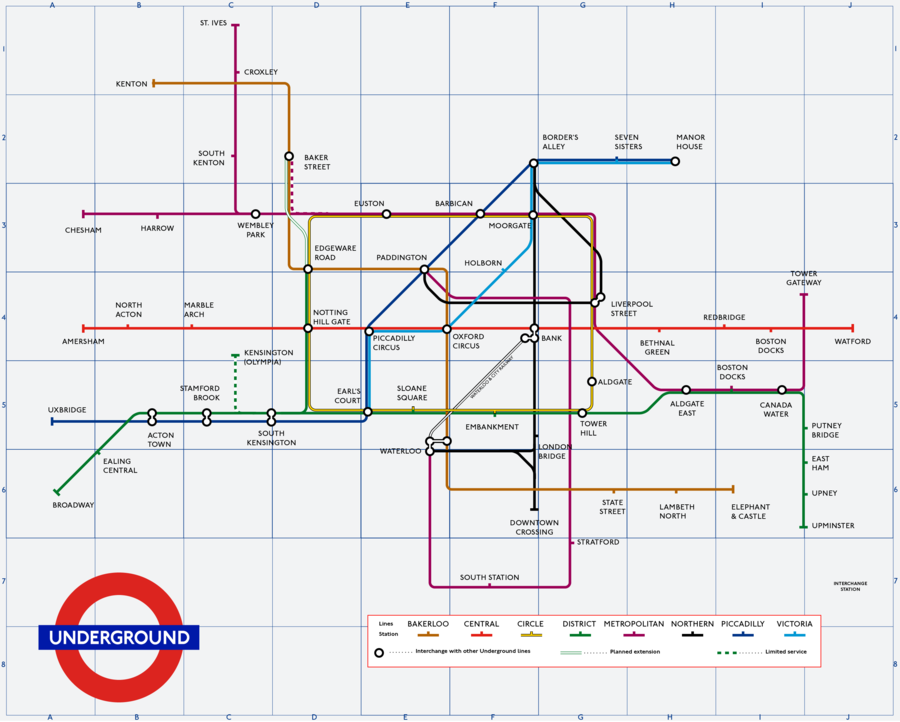 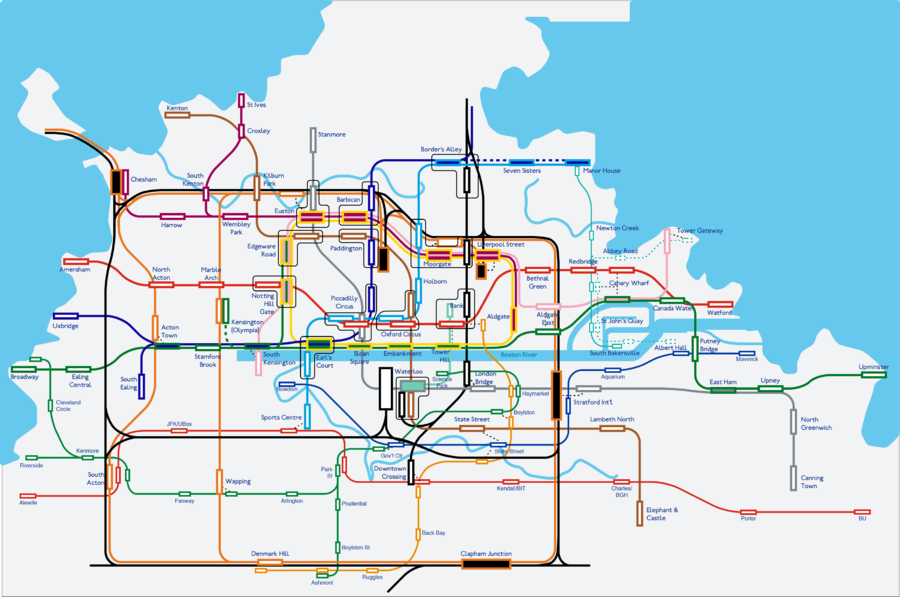 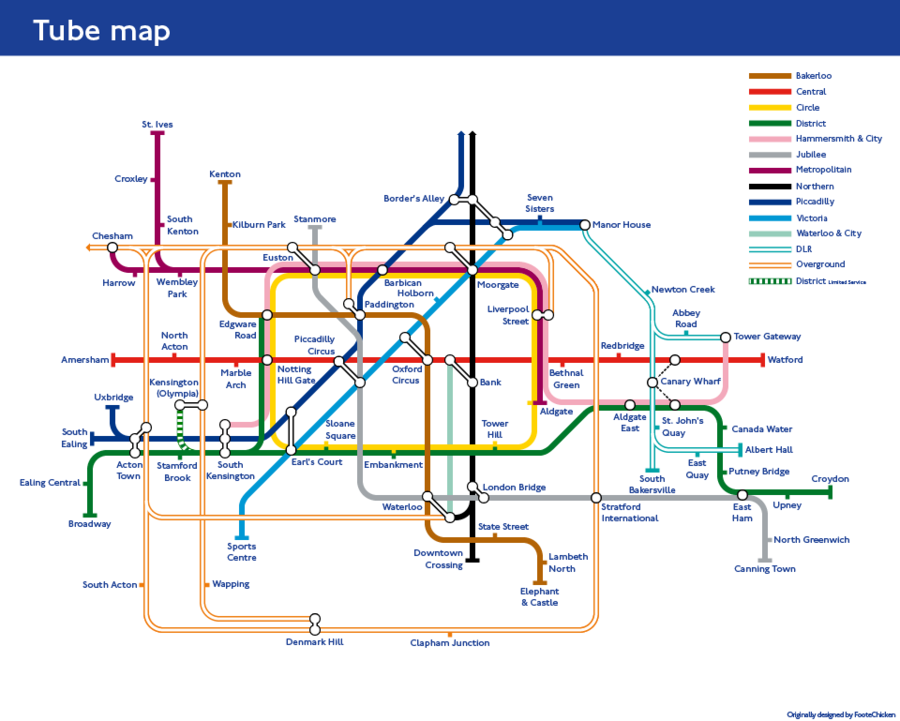 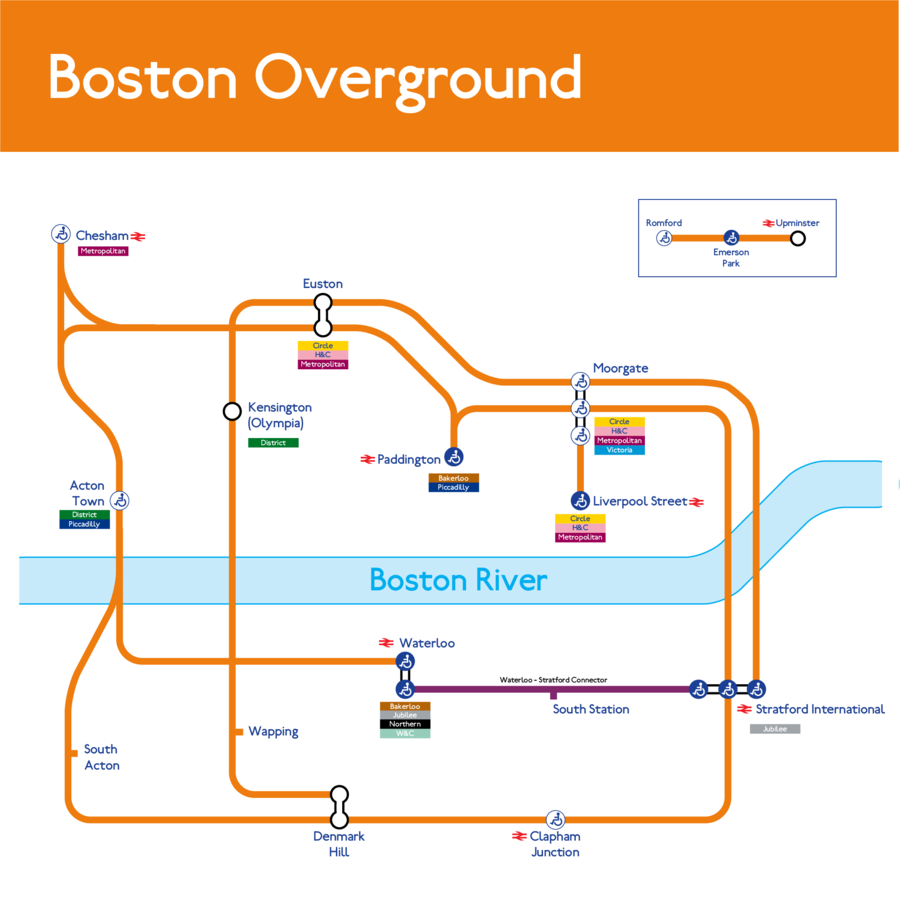 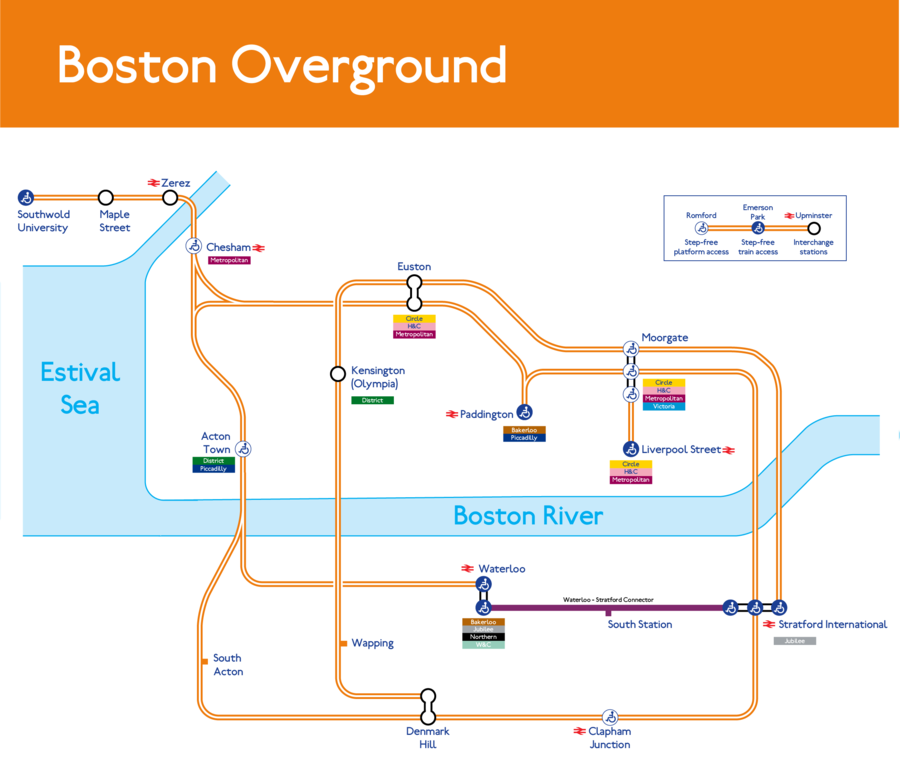 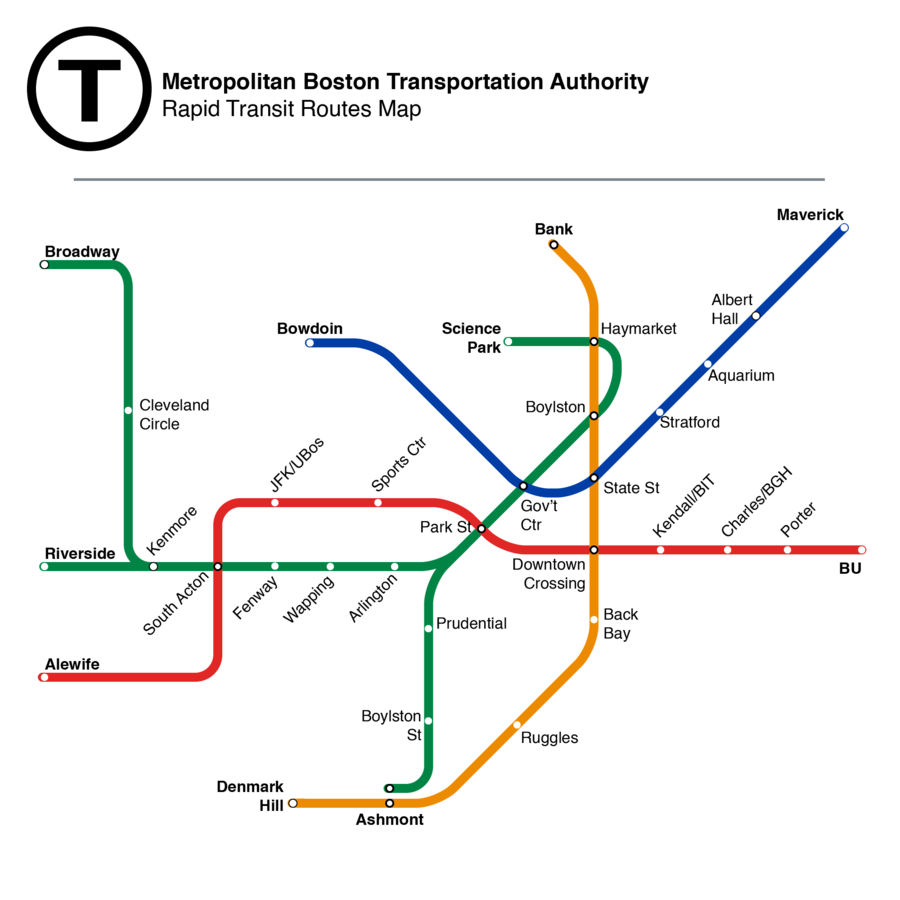