Camelfantasy will try to get back to you as soon as he can.

Hi camel, may I be considered as Head Judge/ one of the judges in Formosa Court? Thanks! -Aliksong 11 April 2015

Hey camel, you're kind of spamming the wiki with edits. To see your edits before you save them, press "Show Preview" rather than saving and continue editing. Thanks MinecraftYoshi26 (talk) 15:13, 11 April 2015 (EDT)

Hi camel, as Vice Admiral i am considering building quite a large navy base and fort for the formosa navy, in the area to the right of the northern dock on Kenthurst Beach. Any thoughts?

Hey camel, I see that you want to make an airline! I am going to tell you that there is already a considerable amount of airlines on the server but I am not to deter you. Instead, I am offering you the opportunity to the Birchwood Airways Staff and help us! Thx Sesese9 (talk) 23:29, 14 May 2015 (EDT)

Hi camel, where was the screenshot of your vitamin drinks store taken? (The main picture of the Viramin Drinks Shop wiki page? I see an AlikLolly regional hq which is a bit damaged. --Aliksong (talk) 22:06, 23 May 2015 (EDT)

Hi camel, I am nominating myself for Chief Justice of the new city group you started. Let me know if that suits. Thanks!--Aliksong (talk) 07:30, 2 September 2015 (EDT)

Hi Aliksong, I'll see if anyone else is interested first, and then I'll appoint the Chief Justice. Thanks for your interest! Also, would Kenthurst be interested in joining?Camelfantasy (Meh) 11:25, 2 September 2015 (EDT)

I noticed that Formosa recently got a road connection to Sealane.

I was wondering if you'd be interested in getting a road connection to Kenthurst?

The road would go west from Formosa's main west-east road, north, then connect up to the 2 lane road just north of my Airport.

Also, the A7 has been approved and is going to go from Central City to Ilirea, via Kenthurst. It will go in between XW6 and XW7. Hope that is ok. Thanks.

Hi Alik, I think the road would be a great idea, and I'm fine with the A7, though I'd like it if Formosa had an exit on the A7. These are some rough ideas of how the Kenthurst-Formosa road might go: 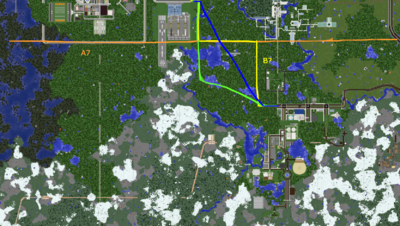 Camel, I'd prefer something like the lime green option. The A7 is also to be built slightly south of the proposed alignment, so that my outer ring road will still be in tact. Exits to Formosa are gone by me. Chimpehhhhh, I have already asked mike regarding moving the A7 about 50 blocks south of the current proposed alignment. Ty. --Aliksong (talk) 11:09, 25 October 2015 (EDT)

Would you be able to email the admins/mods asap to put the Kenthurst-Formosa road proposal on the agenda? I just read that we need approval at GSM. Tyty! --Aliksong (talk) 04:30, 6 November 2015 (EST)

Our road proposal was approved, on the condition mfish approves of the spot where it passes A7 - Camelfantasy

Comment on UCWT map at the bottom of UCWT page

Kenthurst does not accept that the UCWT claims the area west of our canal, and east of my Airport. I propose that the canal be the boundary between Kenthurst and 42.

That area of land is reserved for Airport Expansion as planned by myself and Frozen.--Aliksong (talk) 21:32, 20 January 2016 (EST)

A7 route through proposed Olympic Park

The A7 is proposed to run West-East 10 blocks north of our canal, and parallel to it. It will then go into your proposed Olympic Park territory and then turn slightly north to join onto the A8.

The A7 route is completely straight, until it gets close to A8. It will also be completely overground.

I hope this does not pose any problems.

I'd like to apply for the LoC rank of Admiral of Navies, I'm the long-standing Fleet Admiral of the Atlantis Defence Force and so I'm very experienced with the running of large Navies.

Currently we are undergoing an election which includes replacing the current Supreme Allied Commander. You will have to speak with him (jphgolf4321) about your interest in becoming an officer in MATO, and if he agrees you will most likely be appointed in April 1st, the same time as everyone else. Camelfantasy (Meh) 06:39, 19 February 2016 (EST)

I noticed you were planning routes for the MagLev train network.

Could Kenthurst have a stop on the Waxamawazi-Ellesume line? I assume that the line will pss through or beside Kenthurst.

Camel I can do that Archive Page Now! Ptld

Just wondering if you'd be interested in doing a branch line Maglev to Kenthurst. I can help you build it. The route can be: Follow the Xilia-Formosa line upwards, then curve west prior to XW8 station. Cross the MRT line and Citirail, then continue west. End up north of XW9 station. Let me know if this is suitable. Thanks! ---Aliksong (talk) 07:48, 11 April 2016 (EDT)

That would be a great idea, however we need to get the Formosa-Xilia line, as well as the 42 station completed before we build any more lines or stations, and we need to check with Yellowitcher as he owns the company. Your help would he appreciated. Camelfantasy (M e h)|

Hey Alik, the maglev green line could serve your airport or Kenthurst Central. Let me make a map. Your help would be appreciated of course :) -Yellowitcher

I recently saw what you put on the Yaxier Alliance wiki page about putting sanctions on whomever agrees to the Anti Warsaw Pact Pact. It dawned on me that you are doing exactly what the "enemy", the CSoK is doing. First of all, you should let people think what they think and do what they want. Placing sanctions on people who signed the AWPP is in a way discrimination and unfair. I have seen this happen before in the Yaxier Alliance. Also, you have targeted the CSoK too much and made it look worse then it really is. Why won't you let Kitty do what he wants? Therefore, I'm sorry, but I am quitting the Yaxier Alliance and joining the CSoK.

Hey camal, I kind of thought the same thing when I saw the wiki page. That's really not the smartest idea. You can make that your own policy in Formosa; we can't control that. But you can't force every YA member to sanction AWPP members. This is exactly what Kitania is doing with people who join the YA. I think we might need to limit wiki editing to specific people within the YA, because this was just a dumb move. minnesota is the best, except for when shadowboarder isnt in the state (talk) 21:58, 24 May 2016 (EDT)

I suggest copying my footnotes along with the table, otherwise the little numbers are there for no reason. Click here to see KittyCat11231's user page! Seriously. I dare you. 18:10, 7 June 2016 (EDT)

congrats for the approval of UCWTIA! :D ChimeRail is interested in building a high speed airport express from your town to the airport. What do you say?

Have a nice day
CEO of ChimeRail - Kenta1561

Hey Kenta, it sounds like a great idea. However I the only route that comes to mind is to D6, then to XW/D/M5, as MagneLink is already planned to service M6 and XW6. Let me know if you have any other routing ideas. Thanks, Camelfantasy (M e h) 07:20, 16 September 2016 (EDT)

Hey camel, if you want my airport express to go to XW/D/M5, then the route you suggested sounds very good. May I know where the transit hub of the airport will be?
CEO of ChimeRail - Kenta1561

Want to move up in Dabecco staff?

We now have two new openings for administration ranks for Dabecco. Since you're currently Administrative Assistance, I'd like to give you a promotion if you want. The two open spots are:

Please let me know if you would like either of these positions by this coming Thursday! Thanks!

I am designing a planning committee that will improve connectivity for the ILX VLX Corridor. *see Southeastern Regional Corridor Planning Committee. 2 of your cities are included in the study (Fort Yaxier, Aeolia). A member User:Cact0 has said that you are hesitant to place warp rail or other transportation in Aeolia. Please get back to me. Also, what alignment should I do if I want to be included in the Fort Yaxier Airport.