Difference between revisions of "Venceslo Village"

This article is about the large building in Venceslo. For the city, see Venceslo.

Venceslo Village is a multi-use entertainment-residential development located in the shallow Southwest MRT, in the eponymous city of Venceslo. It is the first multicomplex concept of its kind on the server, containing a hotel, a two-story shopping mall, a large open-air amphitheater, a 550 square-block convention space, a 2-screen movie theater, a Department Store, a casino, and a (currently closed) monorail. It was built wholly by time2makemymove.

The Venceslo Village Expansion Project was completed on November 11, 2017, bringing the total shop count to 16 and restaurant count to 11 - as well as adding a movie theater, new underground parking, and an elevated monorail connecting the Village to Venceslo's MRT Station.

In Spring 2018, the UAV PARK Project added two entrances to the Village on its east side, as well as giving the mall seamless access to Venceslo University and Venceslo Central Hospital.

In Fall 2018, The Village HQ Reconstruction Project was completed, demolishing the former Time2 HQ, and replacing it with two new shops and a new restaurant, bringing the total shop count to 18 and restaurant count to 12.

In early 2019, the Venceslo Village Convention Center was remodeled to make room for more shops underneath it and a new apartment complex to the north of it, bringing the total shop count to 19 and restaurant count to 13.

In Summer 2019, the Grand BearLodge's lounge area and Residence Club Sales Offices were razed and replaced with a small casino. In addition, the Green Parking point of entry was redesigned, as well as the hotel's entry to the shops.

On August 17, 2019, the city of Venceslo announced two projects regarding Venceslo Village as part of its Venceslo Direct 2020. The first was a new Venceslo Village VMet Station, and the second was a planned expansion of Venceslo Village over a to-be-undergrounded portion of the A51. This expansion would host a brand new anchor store and a second tower. Construction on the now-named South Wing Expansion began on October 23rd. 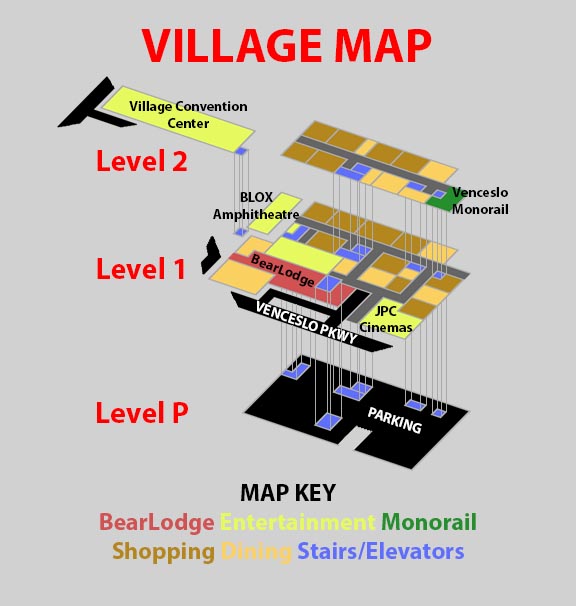 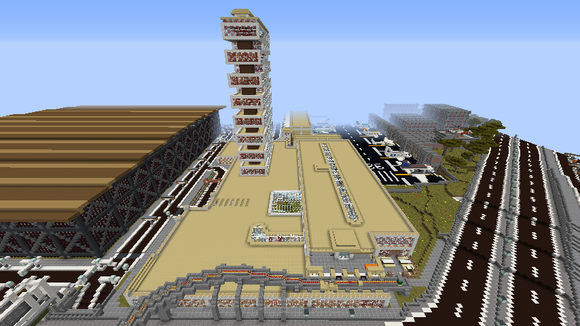 The first BearLodge hotel and the company's flagship property, the Grand BearLodge has 42 hotel rooms and 14 apartments available. It is the most recognizable aspect of Venceslo Village, being a unique 17-story tower with each floor alternating between hotel rooms and apartment rooms. It also has a rooftop pool on the top floor, with scenic spanning views of the desolate desert area. There is a Beachcomber's Buffet and a Traveller's Tavern located in the lobby. It was finished on June 22, 2017, and it opened on June 24, 2017 in conjunction with the grand opening of the Village. It is located on the west side of the main building.

The Shops at Venceslo Village

The Shops at Venceslo Village is a two-story shopping mall located on the east side of the main building. Upon its original opening, there were 9 shops and 6 restaurants located within it. It was the first completed region of the complex, being completed on June 7, 2017.

On October 30th, 2017, it was confirmed by Time2 Properties that The Shops at Venceslo Village were going to be expanded. This expansion included 10 more shops on the first floor, a 2-3 screen movie theater, underground parking below the Shops, and the long-anticipated Venceslo Monorail on the second floor. This expansion was finalized and opened to the public on November 12, 2017.

On October 6th, 2018, the The Shops at Venceslo Village received another expansion, dubbed the Village HQ Reconstruction Project, as the expense of the former Time2 HQ and former location of Cobblestone Coffee Company. In its place, three new shopping plots were built in a new wing of the mall. In addition, the Green Stairs, Yellow Stairs, and Blue Stairs were all redesigned, and the Blue Elevator and Red Elevator were both upgraded to lifts. Two new entrances to the Village, the North Entry and the South Entry, were also built. The list below consists of all the current tenants as of the recent expansion. 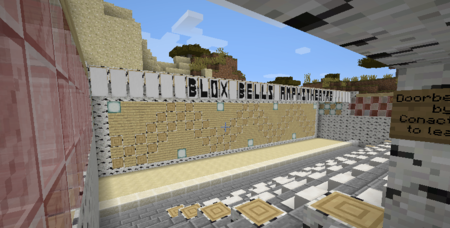 Blox Bells Amphitheatre from one of its entrances.

Blox Bells Amphitheatre is a 65-seat open-air theater located directly north of The Shops. It's name is comes from the theater's sponsor, Blox, a note block company by JTrain77. A custom doorbell installed by the company can be heard when entering the theater. It was completed on June 13, 2017.

On August 30th, 2017, JTrain77 held a noteblock music concert titled "Noteblocks LIVE! Starring JTrain77" in the amphitheater. For the show, the amphitheater was temporarily outfitted with a ticket kiosk and a refreshments stand, and the stage was modified to have an backstage area (which was actually below stage), a firework dispenser, a bunch of noteblocks that could be played in survival mode, and a button that would trigger a chord.

During the construction of Venceslo University Airfield, the Amphitheatre had to be downsized to make room for the main runway.

Venceslo Village Convention Center (stylized VvcC) is a two-hall, approximately 550 square-block sized convention area. Its original iteration was located located across from the BearLodge, over Venceslo Parkway. It opened on July 1, 2017. There originally were two areas for restaurant franchises, located on both sides of the building - the first being a Whitfield's Steakhouse (relocated from the original location in The Shops) and the second an Italiaso.

On September 28th, 2017 the building was moved by crane to its current location, located on the west side of Morton Hill Road, overlooking the Venceslo Art House to the east and the rest of the Village to the south. This building move was done in segments. It was executed as part of the Venceslo Midtown Revitalization Project. The Whitfield's Steakhouse was demolished, and the Italiaso was also moved by crane to be located southwest of the Blox Bells Amphitheater.

On February 1, 2019, the building was demolished and rebuilt from the ground up, with two shopping plots being filled up on the first level and the two convention halls being completely rebuilt.

A monorail was initially planned at the Village's inception (and parts of it were built) connecting the main building to  ZS20  Venceslo Station. However, because of how much of an eyesore it ended up being, the plan was scrapped. A new plan, this one solely connecting the attractions of the Village together, was then put into the planning stages, going under the placeholder name of VencesloLink. As of August 7, 2017, all plans of a monorail in Venceslo Village were confirmed to be scrapped by a representative of Time2 Properties, due to the recent announcement of the construction of the VMet. The VMet connection to the Village, via a tunnel to the South Venceslo Station, was completed on September 23, 2017.

On October 30, 2017, in conjunction with the announcement of the expansion of The Shops, Time2 Properties announced that the plans for a monorail had been resurrected. This was due to two things: the first being time2makemymove wished to expand the Village Shops, and wanted a reason for people to walk up to the second level - the other reason was that time2 never took down the signs pointing to the old monorail, and everyone kept asking where the monorail was. Going under the name Venceslo Monorail, this single-track elevated minecart line is to connect, once again, the Village to  ZS20  Venceslo Station, as well as another VMet station, an STC station, the new Time2 HQ, and multiple bus bays in Stationtown. This project was completed and opened to the public on November 12, 2017.

On September 12, 2019, the monorail was closed in accordance with the Venceslo Direct 2020, and the Venceslo Village portion was demolished. The monorail is planned to reopen in the South Wing in early 2020.

Seastep had offered to build a Casino in the Village at one point very early in the mall's lifespan. If built, it would have been located where the original decommissioned Time2 HQ once resided. However, due to a casino being built in Venceslo's Shadowbrook-South Venceslo district in Summer 2018, as well as Seastep having not been online for many months, and the former Time2 HQ's location being replaced by the Village HQ Reconstruction Project, all signs pointed to this concept being abandoned.

However, on June 24, 2019, Time2 Properties suddenly announced via Discord that the Grand BearLodge's lounge area, the Residence Club Sales Office, and the Green Parking point of entry had all been closed down for a then-secret project. On July 21, 2019, this area reopened to reveal the newly built Venceslo Village Casino, a small casino bridging the gap between the BearLodge and the Shops. 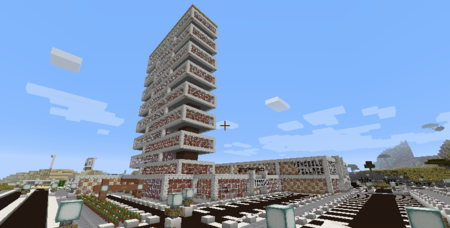 There were many planned attractions to be added in or around the main building. These include:

Time2 HQ was the server-wide headquarters of time2makemymove's franchises. In 2017, this location was decommissioned, as 1 Time Plaza was built in Venceslo's Stationtown District, which became the true Time2 HQ. The Village's Headqaurters sat unused for almost 11 months until Kimberland Mills and Time2 Venceslo Properties announced the Village HQ Reconstruction Project, which destroyed the former Time2 HQ entirely.

Time2makemymove contemplated building a rollercoaster or multiple rollercoasters to the east of the original parking lot. However, as expansions continued to surmount in both the Village and the city itself, there became no room for a rollercoaster to be built; and with the creation of BLOCKLAND VENCESLO, Venceslo's new amusement park, there is virtually no chance of a rollercoaster being built in the Village.

Venceslo Art House, an art museum located directly north of the BearLodge and south of Venceslo City Hall, was built in late July 2017. Although it was planned to be, the final building has no relation to Venceslo Village whatsoever.

The entirety of the original building was built without using Worldedit. This means that, yes, the ENTIRETY of the hotel tower was built by hand. However, the Village Expansion Project used a few worldedits to move the Convention Center and hollow out the underground parking area, but that's it.

The first store built in the Village was nktrain's Funtime Arcade.

There used to be a REDpharmacy in the Village, but it was moved in Summer 2018 across UAV PARK to Venceslo Central Hospital.

There used to be a Mercury203's Pancake Place in the Village, but it was demolished to make room for the amphitheater's box office and parking stairs during the Venceslo Village Expansion Project. Mercury203 was given the option to rebuild the restaurant in a different plot in the Village, but he declined the offer.

There used to be a Knoxford Pizza in the Village, but it was demolished for reasons that time2 doesn't remember.

When UAV Airport was built, the BLOX BELLS AMPHITHEATRE had to be shortened down by a few seats to make room for the runway.

Even though the Venceslo Village Expansion Project was technically completed in November 2017, time2makemymove did not build the movie theater (which he set aside space for) until 9 months later, in August 2018.

How To Get Here

1. Ride the Zephyr Line to the  ZS20  Venceslo Station station, and then head west for approximately 100 blocks (or take the Monorail found at the station) to get to the Village.

2. Use the Central City MRT warp area to go to  C61  Foobar, take the Zephyr line Outbound two stations to the  ZS20  Venceslo Station station, and then head west approximately 100 blocks (or, again, ride the Monorail).

In terms of transport within the town of Venceslo, the VMet has two stations in close proximity to the Village: the South Venceslo station and the Midtown & Village station.

And of course, there is the recently built Venceslo Monorail.