History and Backstory of Waterville

Waterville was founded by PtldKnight, at the time a newly-accepted member, on October 10, 2015 under the name Arctic Highlands. It was situated at A23 station. Later, the town gained its current name in November. Ptld built out Waterville, gaining the Councillor rank for the town on March 13, 2016 and the Mayor rank in April 2016. Waterville at this point was primarily known for its escapades on the roleplay scene, with Ptld's Waterville Armed Forces participating in several roleplay wars such as The Sealane War. However, it would soon begin to gain prominence as it expanded.

Expansion Out to Senator

Ptld chose to start expanding out Waterville to other stations, eventually getting A21 and A22 stations. Ptld also started building sports arenas as he was a fan of sports, eventually building Providence Park as the home of the Waterville Timbers, a Major League Spleef team that he had co-founded with future mayor Skelezomperman. This eventually got acknowledged, and on November 1, 2017, Waterville attained the rank of Senator. However, Ptld was not done expanding at this point; he soon built the Waterville Municipal Airfield to provide air access to the city. With fortunes looking up, Waterville applied to host the 2018 Winter Olympics on February 18th, 2018, and then only 10 days later annexed the town of Orio, formerly owned by Yellowitcher, as Yellow gave the town to Ptld because of his inactivity.

Turnabout to the Modern Era

Ptld unfortunately fell on harder times for himself, eventually accumulating warnings. On July 24, 2018, after being temporarily banned, Ptld announced a departure from the server and gave the town of Waterville to Skelezomperman, making the latter the new Mayor/Caretaker in Ptld's absence. Later that day, Ptld was permanently banned from the MRT Server, with all of his assets falling to Skelezomperman. Skele debated whether to continue the bid of Waterville for the Winter Olympics or not, but however he felt that Waterville could win the bid. Therefore, he chose to continue putting Waterville up for consideration, and with the help of KittyCat11231, who designed the logo, campaigned for Waterville to host the Winter Olympics. 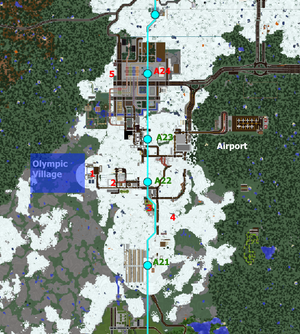 The majority of the venues that would potentially host Olympics events have already been built. They are scattered around Waterville, however bus transportation will be used to shuttle athletes, officials, media, and fans between the arenas.

The centerpiece of the games would be in western Waterville, west of A22. Located here is Providence Park, an outdoor spleef arena built by PtldKnight in 2017 to host the Waterville Timbers. Providence Park will, for obvious reasons, host the Spleef. While the spleef floor itself is one of the smallest in MLS, it is still adequate for spleef. Providence Park is also our preferred location to host the Opening and Closing ceremonies. The Olympic Torch would be installed here, likely adjacent to the main scoreboard. The arena can easily be changed between a configuration for the ceremonies and a configuration for spleef. Located just to the east of Providence Park is the Waterville Exposition Building. The Expo was designed specifically with the sport of sumotori in mind. However, it would be converted to PvP for the Olympics.

The Waterville Country Club, located along the Arctic Line immediately to the south of A22, is a mini-golf course built by PtldKnight. The plan is to at least partially convert the course to ice golf, which is a Winter Olympic sport. To the east of the Waterville Country Club is a large mountain. This mountain is where the ski slopes would be located as there is no construction on top of that mountain and there are no extremely steep slopes. A ski lift will also be built for the mountain.

In Orio immediately to the west of A24 is the Waterville-Orio Municipal Arena. This arena is a multipurpose indoor arena, and can host a variety of sports, including a court for basketball, a pitch for indoor association football, and of course an ice rink for hockey, speed skating, and other sports. This arena is where the ice rink will be, and said ice rink will be to the standards of the Olympics. Note that it is still currently under construction; major changes will be done to it before the Olympics. The arena is also offered up as a potential host for the ceremonies because it is slightly larger than Providence Park; however, the latter was preferred for the ceremonies because of its outdoor ambiance and location near the Olympic Village.

Waterville is already well-connected to the rest of the MRT server.

Waterville does have some metro lines but does not have a large system, especially due to its small size. However, complimentary buses would be provided between venues, and in addition other improvements to local transit for the long-run would also likely occur.

As stated above, the majority of Waterville's venues are already completed and have been used for various purposes past and present. The remaining things to be built will provide a positive effect to Waterville. The Ski Resort would, alongside the Country Club, eventually be marketed to the MRT in general, to become one of the biggest ski resorts on the MRT and make Waterville a tourist destination. In addition, there is also the Olympic Village, which would add hospitality capacity for Waterville as well as serve as a continuing monument to the Winter Olympics. Not much new will be added, but what will be added will provide a net positive contribution to Waterville.