Difference between revisions of "Wenyanga"

Wenyanga is a town in the Zeta Region on the New World, owned by Airplaneguy9. Being one of the first towns to pop up on Zeta, the town is steadily growing. It was founded on February 29, 2020, the opening day of Zeta.

Wenyanga is officially pronounced 'when-yang-uh'. 'When-young-uh' is used by many outsiders and tourists, but is discouraged.

Wenyanga was planned as far back as January, when Airplaneguy9 mentioned that he wanted a new town when Zeta came. He planned to build it on the coast, near mi_aquamarine and i____7d's claims. He tried to get the lake around the area renamed, with no success. As Zeta came closer, Airplaneguy9 started planning the area, such as roads, buildings and houses. His plan for the city was to show a typical third-world city, with a small CBD, and many suburbs being typically low to medium income. 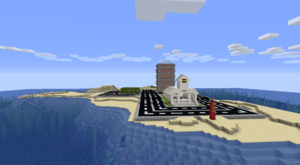 Airplaneguy9 settled upon Wenyanga on 29 February, restrained by massive lag. He erected a signpost there, which reads "Land owned and claimed by Airplaneguy9 on 29 February 2020" in the town's four official languages. He built a town hall with the help of deputy i____7d, and started building the road layout. Over the next week, he completed one apartment and started another, but that was it for the next month. No progress was made on the town, and Wenyanga was known as 'the eternal Trustee town'. Due to lack of infrastructure and builds, neighboring Shenghua and Kazeshima were built up very quickly, with Kazeshima having its own metro system.

Wenyanga joined the Republic of Epsilon on 1 March 2020, with its only seat going to the Llama Liberterians. It was featured on the front page of the Epsilia's second edition on 21 March, on i____7d's article on the Zeta Region, and the caption said 'Airplaneguy9's town Wenyanga, one of the first towns on Zeta'. It was one of the three founding cities of the Nansei-Gunto Region on 24 March.

Finally, on April 3, Airplaneguy9 decided to start again. He picked a spot close to the area where the old town was, and built a square with the Nansei-Gunto flag on it. He started laying out roads and building a small CBD. Within 10 days, the town had gotten Councillor, being shockingly the first town in Nansei-Gunto to be recognized.

Today, Wenyanga is steadily growing, with new buildings being erected. 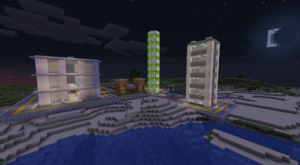 The Old Town is the location of the original Wenyanga. It contains the town hall and two apartments. The district is easily recognizable with its wide, black-tarred roads, different to the normal grey roads seen in the rest of the city. This section sees few buildings, and eventually fades out to the newer section of Wenyanga, further up the coast. It is bordered around by a beach, and stands on an island connected to the new section by a road.

This district is the heart of the CBD. It contains the Flag Square, where the first block of the new Wenyanga was placed, and buildings such as the Public Library, the Mall. and the Mayor Residence. The Lighthouse is on the island off the coast of the CBD.

The land Wenyanga sits on is mostly beach, where the town starts creeping up into the plains above. The agreed border for the town is the savannah above the plains, which is also the border of the Nansei-Gunto Region.

There a few islands in the area, namely:

Wenyanga has a cool, temperate climate, with warm, dry summers and cool, wet winters. The city follows Southern Hemisphere seasons, with the Summer Solstice occurring on December 21-23 each year.

Wenyanga drives on the left-hand side of the road. There are few roads in the area, and most are categorized into Old (black, two-lane with white markings) and New (grey, one-lane with yellow markings) roads, with one gray road linking the two. There aren't any road connections into Wenyanga, but there are plans to connect it with Shenghua and Kazeshima by the means of an underwater A-road.

There are no rail connections in Wenyanga, but FLR plans to serve the area.

Wenyanga Harbour serves the town. Built by i____7d, it aims to connect the region by boat to other bodies. Hummingbird Boat Lines sail to Kazeshima and Shenghua from here.