Willow is a small city created by willowars. It was founded in November 2018 at T48, on the Taiga Line. It was previously claimed by Seastep. To the south is Charlemagne ,Savage City and Sansberg, and to the north is Borealia. To the east is Chillington and Larkspur, and to the west is the newly founded Twilight, being built. The city joined the Kaktus Republic and currently does not have very strong relations with it yet. 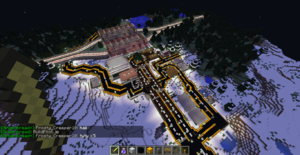 Unrealistic District (circa november 2018). Note the W-1 with iron doors for traffic direction.

The Unrealistic District is the first district upon exiting T48 on both sides. It is the first part of the town built by willowars. The station itself is on the border between a Taiga Biome and an Ice Plains Biome. The original owner, Seastep, built only two roads and one building, but was untended for over 5 months and thus became unclaimed. willowars claimed the area and started by building a roundabout and an artery named Willow Parkway. The road W-3 is the only way to access the south of the district, W-1, the west, and W-2, the north. Borealia cannot be accessed by W-2, as the highway is in a tunnel, and rendered it useless, so W-2 was decommissioned. 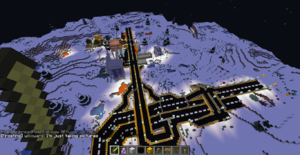 A view of Realistic District (Circa December 2018). Notice the W-1/W-2 interchange.

The Realistic District is the second district in Willow. It can be accessed by travelling on W-1 West. W-1 West becomes an artery, at B-Road standards through the district. It has roads and wider spaces to build in, and less rugged terrain is present. The Town's gas station is also here, built by mi_aquamarine. Quartz Trail is the shortest road in the district as well in Willow, being 7 blocks long, because Weier had built an apartment into the road unknowingly. Willow Transport Solutions is a road maintenance company that assists in construction of roads and other transport features, such as rail or plane, if players ask for the help. Jupiter Motors is the second company that builds rolling stock for other railways, but if there are no rail companies to buy the trains, Jupiter will commence a rail system itself. This district is the most developed one, having essentials such as fire stations, a school being built, a small commercial area and housing.

Willowridge is an industrial district that will include logistics, depots, and industries. It currently houses the logistics centre for WTS and has a WillowTrans depot. Sidewalks are present in the district and into a cave system that could be built into. Since February 2019, Willowridge has been completely cut from Willow after border changes with Borealia. This cuts off W-2's importance as a vital connection northwards and to A92 and all buildings must be destroyed to keep Borealia's satisfaction. 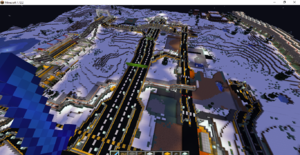 Named after the default name for stations, this district will be a residential suburb from the town. It is currently the southernmost district from Willow. It has more modern houses and the local roads do not use guardrails or centre lines.

This is the closest district to Twilight, a town founded by Shanape across a frozen river. This district is planned to have mixed zones, with inustrial, commercial, residential and possibly military regions. It is connected by the W-1 and Services Dr.

Lakeside is the only built region east of the MRT Taiga Line. It currently has a Tacurger Shack and a parking garage. There were plans to connect it to the extended A8, but to this day has not been approved.

Although Willow is a northern town, it exploits mostly pumpkin farming, spruce logging, and mining might also commence on the nearby 6 ravines. Charlemagne to the south has a warmer climate, and there is a farm that helps provide food. After Willow gains road access to the A92, food and goods can be imported more easily.

WillowTrans, the name of the bus services are operated by Willow Transport Solutions (WTS) in the town. There is currently one route in full operation, Route 1, and uses the Jupiter Minibys 1A, a boxy, ugly and weak minibus that is used to get from the Unrealistic District to the Realistic District. The rolling stock of WillowTrans is supplied by Jupiter Motors and some models are built by other players, notably Weier. The second route of WillowTrans was canceled due to border changes. The third route runs from Unrealistic District Bus Terminal to Midnight Bus Terminal. This route also has an express branch, skipping all the stops and having only one intermediate stop, Hill Line in Foobar District.

Willow has roads that are 2 blocks per lane and 3 blocks per lane, which will be on new roads and existing roads past Ice Lake Street. The roads in Unrealistic District mostly are 2 blocks per lane and have a median made of spruce fence, or cobblestone walls. Main Street Willow is a major artery in the district and many shops are planned to be on it, as well as collector roads and local roads will branch off of it. The roads in Realistic district are all 3 blocks per lane and some have medians while some don't. The roads mostly branch off of W-1, a road with super 2 highway standards with mostly at-grade intersections. New districts such as the Foobar District will include local roads that do not have a centre line and are 4 blocks in width.

The W-1 is the first road to be numbered in the Willow numbered road system. It is called the Willow Parkway in the Unrealistic District and is 10 blocks wide for some of its length. The parkway serves as the main road to access other areas of the town. It features iron doors to direct traffic, but ends at Ice Lake Street because of complaints. The parkway intersects with Ice Plains Gate, Main Street Willow and Ice Lake Street before interchanging with W-2, and continues as a 2 lane road into the Realistic District. It intersects with the short Quartz trail and Snow Road. The Realistic Busway is further west, and provides as a point of looping for WillowTrans Route 1. The road heads in a westerly direction into the Midnight District and crosses the Frozen River Bridge into Twilight.

Services Drive is an arterial road that runs parallel to W-1. It becomes W-1A as an extension of W-1 that goes along the Frozen River. As the name implies, this road is where most services are located, if not, they are close. The road gains its name after intersecting with Dark Skies Blvd. Services Dr upgrades to a right-in--right-out highway and will run parallel to W-4 in Charlemagne.

W-2 is a decommissioned controlled-access highway that was cut from the Willow Numbered Road System due to border changes with Borealia. The highway will be rebuilt as a B-Road, and will only have 3 exits: A92, Avenue Rd, and W-1.

B-892 is the former W-2, and is undergoing construction through Borealia. The route number has a concurrency with several Willow Numbered Roads before it will branch off the W-3 eastwards to Lavalake.

W-3 is a road that connects Charlemagne and Savage City in T47 and T46 respectively. It is a limited access rural highway. It is 2 lanes wide for it's length and is known as Ice Lake Street inside of Unrealistic District and provides access to regions south of Willow, such as Foobar District and Charlemagne. It is the longest numbered road in the Willow Road Numbering system, being more than 600 blocks long. This highway underwent many realism renovations to keep it up to date with the MRT’s highway standards.

Formerly called Foobar Road, this is an expressway that will bypass most of RD and MD. It begins at W-3 as a 2 lane arterial road and after meeting Hill Line, it changes into a controlled-access highway and heads in a southwesterly direction to Birch Road, then heads in a straight line to a tunnel over Dark Skies Blvd in Midnight District. A ramp off of the south tunnel exit provides access to the W-5 and is a semi-directional T interchange. Next, a westbound ramp gives access to Sigma Borealis Rd, and after a quite sharp turn the freeway intersects with W-4, in the largest turbine interchange of Charlemagne and Willow, where it will continue into Charlemagne as a four lane freeway.

Willow has two test Light Rail Lines operated by WillowTrans. Line 1 heads under W-2 and to the WillowTrans Depot in Willowridge. Line 2 travels in a southwesterly direction to Midnight District where the City Hall is. Because of border changes between Willow and Borealia, rail service will cease temporarily until a conclusion has been made. The only LR line is Line 3, from Midnight North to Midnight Bus Terminal.

WillowTrans operates a heavy rail line that heads from Willow Central to Midnight North Railway Station. The train used is a J Class S2. This service has been cancelled as Willow Central was demolished. A new line replaced the old one and it serves Charlemagne Central and Midnight North.