From Minecart Rapid Transit Wiki
Southport redirects here. Please go back to the page that linked you here and correct the link.
Jump to navigation Jump to search

Southfort (formerly known as Southport) is a town located in the tropics of the MRT and is the seat of the Commonwealth of Cnidaria and home to the headquarters of LocalCorp. It is a blend of various architectural styles including classical, colonial, and Mediterranean.

Southfort was founded in 2017 by _Katla_, then known as SigmaTheEnigma, with a goal to start anew after feeling boxed in by their previous towns. They picked a large set of islands in the southern area of the map knowing the Southern Line of the MRT would be built nearby. (A practice now discouraged)

Katla intended to set the town apart from other MRT towns, and went for a Mediterranean aesthetic consisting mainly of sandstone and red bricks. Southfort's first buildings were its city hall and a LocalMart and the first skyscraper was the new LocalCorp headquarters. Southport was endorsed to become a councillor level town by Frumple.

While orginally intended to be a republic, Southfort was quickily re-envisioned as a absolute monarchy, starting as a city-state and later becoming the seat of the Southportian Empire (later, Cnidarian Commonwealth) The city would become a battleground for many wars on the server including the Southport-Armada War, the Zerez-Pearl Coast-Southport War, the Nauvian Aggression, and the War of the Two Kitanias. For a time, Southfort became synonymous with a town that was always at war.

Southfort's name was changed from the orginal "Southport" on June 4, 2020 over a matter of it being more a "fort" than a "port." The city enjoyed a period of major expansion and renewal that month, following an unsuccessful Senator bid.

Southfort had no human indigenous inhabitants and was instead occupied by a race of tropical lizardpeople, likely an offshoot race of the natives from the nearby Juhwa islands. A small village was on the site with a name roughly translating to "Sun-Baked Nice-Rock."

Southfort is located in the tropics of the MRT at a similar latitude to Sunshine Coast. It is primarily situated on a series of low lying atolls. The city receives small rain showers almost daily and experiences an annual hurricane season.

Southfort has a sizable Furry population, approximately 85% of its citizens are anthropomorphic beings, with humans as the remainder. 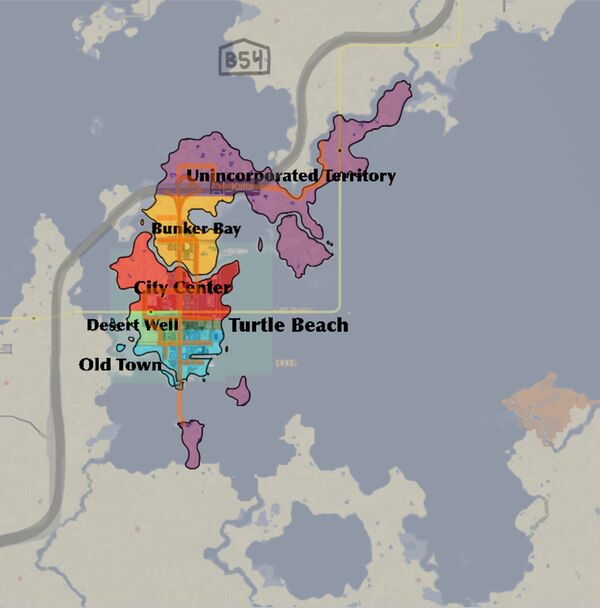 There are currently six major boroughs in Southfort: Old Town, Desert Well, City Center, Bunker Bay, North Coast, and the Panhandle. All of Old Town, and portions of Desert Well and Bunker Bay are protected by the Cnidarian Historical Society.