This is area for general announcements regarding all of GSRFT's transit systems.

This is the commuter division of GSRFT. In charge of commuter rail and bus operating into Royal Ferry.

This is the metro division of GSRFT. It is called the Underground normally due to it being mostly underground.

This is the first division of GSRFT to be built/installed. Buses have been purchased from IntraBus Fleet Division. Routes are being set up on all major streets or major points of interest/ transfers. For more info Click Here.

This is the newest division of GSRFT. All services run from Royal Ferry Victoria to surburban developments where the main form of transit is car. There is also one tramline that operates in the downtown area, for short drops where the use of metro would take too long.

The GSRFT network as it is today is the amalgamation of the Trinidad & Tobago Railway company and the Guyanese Transcontinental Railroad. The Trinidad & Tobago Railway company better known as the TTR has built the Bakerloo, Northern, Piccadilly, and parts of the District and Metropolitan routes. The Guyanese Transcontinental Railroad also known as the GTR is responsible for building the Central, Victoria, a majority of the District, and some parts of the Metropolitan route. The Circle and Hammersmith & City were built as pieces of the Metropolitan and District routes. The GTR and TTR were not only the operators of metro services but also operated competing bus services. The Jubilee was proposed by GTR and was in the beginning phases without much support, but soon after starting the project GTR suffered many financial difficulties and eventually went bankrupt. All of GTR's assets fell to the monarchy. TTR tried to takeover the project but with the monarchy refusing to release the project and many financial troubles TTR was soon bought out by the monarchy before the syste shut down all together. Following the consolidation of TTR and GTR under the monarchy the two systems were rebranded as GSRFT and were reworked. By then the two companies had owned not only metro rail but also commuter rail, bus routes, hotels, and other properties. New routes were created, the Hammersmith & City and Circle routes were created. The Jubilee was completed following many trials and tribulations. With more modernization projects on the way we will provide excellent service by the year ∞(And that's a promise!) .

As of November 2016 all; trams, buses, metro, and regional train services have been upgraded to our new smart ticketing system called the "Lychee card". To use your Lychee card simply tap you Lychee card on the scanner and go through the barrier. In order to board a GSRFT service refill you ticket at any of the ticket machines, located at most bus stops and all metro and regional rail services. 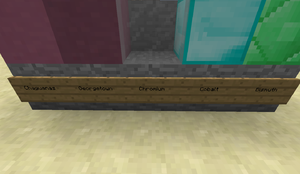 A picture of the different tickets

All systems whether it be metro or bus have a ticket scanner. In metro station before descending to platforms there is a ticket gate, insert your ticket and go through the barrier. You can normally get a ticket from the ticket dispensers near the near the ticket gates. When chosing to ride a bus, tickets can be purchased or refilled at a ticket machine available at most bus stops. Please pay before you board. Paying in cash on board a bus has an extra dollar surcharge. There are 5 different types of tickets available to the public.