Big Brother is a competition game show based on the Dutch television series of the same name that follows a group of contestants, known as houseguests, who competed in challenges and create alliances. The houseguests joined a Discord and have respective diary rooms, which first began in the third season. The contestants competed for a grand prize, with competitions and evictions determining who won the show. This version of Big Brother was based off of the United States version of the show.

Unlike other major serial game shows, there were no sessions and the game is held on one's own time.

The franchise was officially announced as concluded on November 22, 2020, as no future season was planned for the foreseeable future due to a lack of free time.

The contestants, referred to as "houseguests," took part in several compulsory challenges that determined who won luxuries and power in the house.

Each episode, six houseguests were selected to compete in the Power of Veto (PoV) competition: the reigning HoH, their two nominees, and three houseguests selected by random draw. The winner of the PoV competition won the right to either revoke the nomination of one of the nominated houseguests or leave them as is; if the veto winner used this power, the HoH had to immediately nominate another houseguest for eviction. The PoV winner was also immune from being named as the replacement nominee.

On eviction, all houseguests voted to evict one of the two nominees, with the exception of the nominees and the Head of Household, who was only allowed to vote in the event of a tie and, in that case, must do so publicly. This compulsory vote was conducted in the privacy of a private message. The nominee with the majority of votes was be evicted from the house, after which the cycle begins again. The Head of Household could compete for HoH again only in the final episode.

Houseguests could voluntarily leave the house at any time and those who break the rules may have been expelled from the house. Some evicted houseguests formed the Big Brother jury and voted for the winner.

Starting in Big Brother 3, there was a Discord created for announcements, diary rooms, the jury house, and general discussion.

Big Brother Mini was the same style as the normal Big Brother, but was shorter and was paced faster. 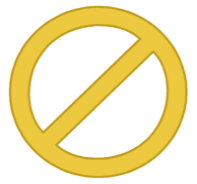 The Power of Veto symbol.

The Head of Household competition was held at the beginning of each episode. Various competitions may have punished or reward contestants.

The listed spin-offs include seasons that were planned to occur but failed, even before the flagship version.

1. ^ This count does not include the spin-off seasons that did not finish.
2. ^ a b Big Brother MRT: Season 1 was most likely going to be held in the non-American format of the game and therefore, the host, yeamantor132, is not considered the original creator of the show.
3. ^ The season was set to be renamed to Big Brother 3 if successful, however, it was canceled after a week.