Lakeborough is a town located in between Skogheim and Norwest. The town was founded in late October 2017 and is expanding at a rapid pace.

In Lakeborough, we have some franchises. Here are some of them...

How to get to Lakeborough

From Central City Head to United Cities Bus Terminal and catch route #PBCS to UCWITA. Enter into the terminal and head to the end of Concourse E, where you board the bus to the eastern gates. Head to the plane for Norwest and click the warp that's inside. Transfer to the helicopter gates in Terminal 1 at Norwest and head to the end of the gates. Catch the helicopter to Lakeborough by clicking the warp. Exit the heliport through the side exit round the building. At the heliport in Lakeborough, head across the bridge into the town centre and you'll be in the heart of Lakeborough!

In the South Hill area, there is a new heliport. This currently has one gate with a small terminal building, but an extension for another helipad is planned after Mayor rank is achieved.

The town is served by the Lakeborough metro, which has 11 stations and 3 lines. All lines stop at City Hall station, with a passage connecting line 3 to lines 1 & 2. Line 1 runs from Grenfell to South Hill, Line 2 runs from Washington to Parliament and Line 3 from Thrice Rivers to School. Currently the lines are being wired up, with Line 2 being complete. Below is a map to help with navigation. 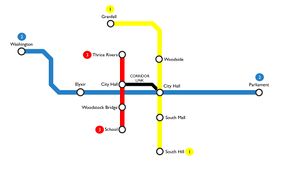 After a hiatus, the town is in development. Future plans are for road connections to neighbouring towns, including Norwest and expaning the residential areas of the town