The Mole 1: The First Betrayal

The Mole 1: The First Betrayal, known colloquially as The Mole 1, is the first season of The Mole. It consisted of six episodes, done on the weekend of December 28, 2013 and December 29, 2013. It featured eight non-staff players, one of whom was the Mole. The maximum possible value of the pot was 21,100 diamonds, and each quiz consisted of nine questions. The subtitle The First Betrayal was given after the season had ended. 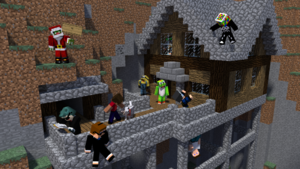 Episode 1 - Welcome to Your Demise

The Fall of Your Life: All eight players were flying in a plane above The Mole Manor and during that flight, they heard an explosion. Their challenge began immediately, players had to jump from a plane and land in the correct colored rings to earn diamonds. The group was split into 3 groups, easy, medium, and hard. The Easy group was Music3_0, jphgolf4321, and Skelezomperman. The Medium group was godzilltrain, jakd2000, and gogojakeo. The Hard group was wilywonker and lil_shadow59.

Do You Know Your Opponents?: All players were shown a board of signs asking questions about each player such as their hair color, what was their school they are attending, where are they from, etc. Once they have read though the board and written down as much as possible in two minutes, they were asked to split into three groups of their Easy, Medium, and Hard. Each group had to answer 3 questions correct and then, they earn 100 diamonds per group. Sadly, none of the groups won and received no diamonds.

Build It: The seven remaining players were split into two groups, one with 2 people, and the rest in the other group. The group with two people were the builders, the group with the most people, were the seekers. The seekers had to find the blocks to replicate a simple build in five minutes. The prize was 800 diamonds.

At the start of the challenge, they were told that there were only twelve chests in the map, if they paid attention, they would have taken notes on that, and seen that it was on the quiz. The builders were jphgolf4321 and gogojakeo. The other team consisted of Music3_0, lil_shadow59, Skelezomperman, godzilltrain, and wilywonker. The team failed the challenge, costing the team 800 diamonds.

Teamwork Exemption: The group had to come to a consent to give an exemption to someone, which means, they are exempt from getting eliminated that episode. The team could have fell apart in this challenge, but however, godzilltrain got everyone to agree on giving the exemption to Music3_0. The team would have lost 300 diamonds if they couldn't have come to a consent, but however, since they did, they gained 300 diamonds.

Kidnapped Host: In this challenge, the group had to split into 3 groups. Flyers, Teleporters, and Riders. The Flyer was wilywonker alone. The Teleporters were lil_shadow59 and gogojakeo. The Teleporters were confined to using only the /call command and were therefor "sitting ducks". Finally, the Riders were jphgolf4321 and Music3_0. The Riders were confined to using only minecarts. They had a 30 second call from MinecraftYoshi26 that stated he was on a ship and saw wool, wood, and water. The group had ten minutes to find him. They had to find Terrin by the hints given by MinecraftYoshi26 and a picture. They failed and the mole earned 1000 diamonds.

Farm Fiasco: The group had to whip up a series of food items by gathering items though out Valgirn's farm. They had to make 64 cookies (worth 300 diamonds), 16 steak (worth 200 diamonds), 10 cakes (worth 500 diamonds), and 32 pumpkin pies (worth 400 diamonds) under eight minutes. The team had to figure out that the eggs were in the farm house and there was a tamed dog with a blue collar, which is a question on the quiz. The team only completed making 16 pieces of steak, which in turn, gained the team 200 diamonds, and the mole one thousand diamonds.

Episode 4 - A Pleasure to Have You

"In a Kingdom made out of stone bricks, a king ruled with his wife and his daughter. The daughter longed for an emerald block and a jack-o-lantern. The king wanted to get his beloved daughter those items, so he went to his enchanting table, next to his bed, and prayed. His wife suddenly came in, and broke the wooden door, and the king, prayed for the door to be fixed instead."

The items that were supposed to be placed on the wrong side was a torch, bookcase, stone, furnace, iron door, hay bale, and a diamond block.

The team successfully earned 1000 diamonds for getting at least 10 out of 13 right.

The Golden Present: The group had to go through all the presents on the Christmas Island, and find an exemption, and the person who found the exemption was exempt from being eliminated that episode. They were given hints about what the present looked like. It was described as purple, with a bow, opened, and made with obsidian. wilywonker found it, and was offered 1000 diamonds. He took it immediately and 1000 diamonds were added to the pot, and the mole got none. However, if wily refused that offer, he would have been offered 2000 diamonds.

Bed Trivia: In this challenge, the four remaining members had to work separately. The four members had to choose from four separate paths which each path had questions about a subject. The four subjects were Movies, MRT, Math, and History. The trick was that three out of the four sections are real, one of them is fake, no questions, and will kill instantly if pathway the pathway was stepped on, they found it, 500 diamonds were rewarded. The path that was the fake was history.

Counting Sheep: Two players out of the four are chosen as the group that "can count to 267." The two people were Music3_0 and gogojakeo. They have to count the number of sheep correctly, 500 diamonds are added to the pot. The players succeeded at mission because of gogojakeo's wit (there were 267 sheep, the exact number listed at the beginning of the test).

Green Thumb & Mind: Two players out of the four are chosen as the group that have a "Green Thumb & Mind." The two people were wilywonker and Skelezomperman. They had to recreate a flower garden bu seeing the key at the bottom of Yuki Mountain at Wishington, and remembering the pattern, then getting the flowers from the top, and recreating it up there in seven minutes. They lost 500 diamonds to the mole.

Penalty: gogojakeo trolled and did not follow instructions and rules and lost the team 1,000 diamonds.

Ticking Timebomb: The three remaining players had to solve a puzzle in twenty minutes or they would fail. The aspects of the puzzle were to solve four puzzles, leading to four codes, leading to one puzzle, leading to one code, leading to the answer to win. The answers to this puzzle can not be revealed so that if you would like to play it, ask MinecraftYoshi26. The team ended up failing this challenge, losing 2,000 diamonds.

The Long & Winding Roads: The three remaining players are asked personal and revealing questions about each other. One by one, a diamond is hidden in a chest in hidden in a village. The two other players are asked the same questions, and must try to match the answers given by the hidden player. After each response, the two players go either left or right in a fork in the road. If they answer all three questions correctly, they will successfully guide themselves through the village and find the hidden diamonds. If they make just one wrong answer, they will go down the wrong fork in the road and will not find the diamonds. This took place at Whelburn. The team got all incorrect and gained no diamonds.

Episode 2: Music3_0 sabotaged Build it, by getting as many blocks as possible and clearing his inventory, so the group would have less of a chance of succeeding at the challenge, and his plan succeeded, making the players fail.

Episode 3: Music3_0 knew that MinecraftYoshi26 was at Terrin and he tried to lead them to places with similar ships such as Lighthouse, Inchmuir, etc. In Farm Fiasco, Music3_0 tried hiding the dog from players and not telling where the eggs are.

Episode 4: Music3_0 hid the enchanting table and putting the bookcase on the wrong side of the mat, however, that did not stop the team from winning Story Time. In The Golden Present, Music3_0 was instructed to, if found the exemption, deny the money and keep the useless exemption.

Episode 6: In Ticking Timebomb, Music3_0 lead them off track. The Mole answered all the questions backwards to throw off their gains in The Long & Winding Roads.