Inchmuir (meaning island of moorland, in Scots) is a city on the MRT Server owned by thomasfyfe. Inchmuir is located at  B19  on the Blue Line in the South Eastern part of the map.

Stonegate bridge and Inchmuir bridge hold the MRT Blue Line which connects the city to Spawn City as well as neighbouring towns Miningstone and Wishington. As well as the MRT, Inchmuir Central station hosts many rail lines.

The  6  bus can also be taken from Spawn City's Bus Depot along the South-East Highway.

Inchmuir originally started as an island home for thomasfyfe, a small town grew around Fyfe Manor which eventually expanded into a city over time. As more building space was needed to accommodate the city's growth, neighbouring islands were acquired for the expansion. In total Inchmuir covers 5 islands and part of the main continent. Inchmuir has a thriving business district and recreational facilities which make the city a great place to live and work. Inchmuir is famous for its power grid, most buildings in the city are connected via redstone to the grid. Power is generated in North-East Island's industrial district and is distributed by Inchmuir Power to the seven city districts: Business District, Residential District, City Centre, Inchmuir Spaceport, North-East Island, Southern Island and Waterfront.

Inchmuir is home to many well-known attractions among other things:

Inchmuir has a comprehensive rail network with Inchmuir Central acting as the main hub. Inchmuir has two other stations, Inchmuir North and Bus Station, as well as several stops along the city's subway network. 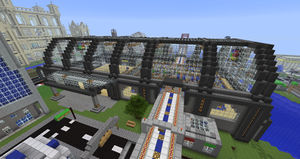 Inchmuir Central is the one of the largest transit hubs on the server, with its current capacity available to hold 25 different station schematics and the ability to expand its modular structure to hold even more. Inchmuir Central uses various station designs from Cyan Systems but can also adapt to fit other third-party designs.

Inchmuir North was built by BaronThamesBank at North-East Island. It serves as a smaller, secondary location for rail line connections.

Inchmuir Bus Station has space for up to 4 bus routes, only 2 are currently occupied. The bus station was built in collaboration with Architechnic.

Inchmuir has its own subway network consisting of two completed lines and two planned lines. Along with Central, North and the Bus Station, the subway also serves local stops including: Residential District, Waterfront, Spleef Stadium, Inchmuir Spaceport and Inchmuir Mall. 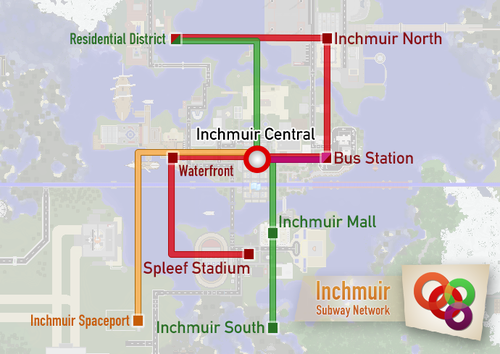 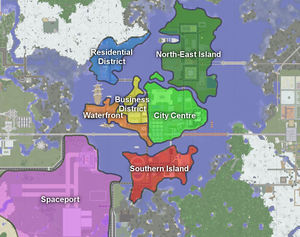 The seven districts of Inchmuir

Located in the business district are the global headquarters for FyfeCorp as well as the original MRT Trade Centre. The trade centre has been home to the Laser Corporation, LSN Holdings, LP Inc. and is now currently owned by UL Industries The district is also houses the central control for Inchmuir's power network, one of the more unique features of the city. Known originally as Redstone Power Inc, Inchmuir Power is the control centre for the entire city's power supply.

The operations building for Inchmuir Power was demolished leaving only the grid control centre underground. The whole building was replaced by the new Inchmuir Tower which will hold power operations as well as the city's council and administration. FyfeCorp is also looking to move its main headquarters to within the 17-story skyscraper.

The city centre is located on the main island and is the oldest part of Inchmuir. Fyfe Manor and its grounds dominates this district but it also holds the city's shopping precinct and town hall. The existing bus station was refurbished by Architechnic as part of the city centre improvement program. The bus station has routes to Spawn City, Miningstone and New Delvin.

Inchmuir Central Rail Station (previously known as Inchmuir Regional Rail Station) has a number of platforms available for independent rail lines wishing to connect to the city. If a player is interested in claiming a platform for their rail line, please contact thomasfyfe. 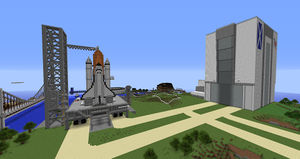 Inchmuir Spaceport is a massive complex under construction by the Inchmuir Space Agency to provide missions of space exploration and research. The Vehicle Assembly Building (VAB) is the largest building in Inchmuir and unofficially the largest single-story building on the server.

The spaceport will contain two launch pads, a mission control centre, and research facility when complete. If the ban is ever lifted on airports/runways, ISA will consider installing a runway to allow the space shuttle and other support craft to land directly at the facility.

Inchmuir was expanded into neighbouring islands after the need for more building space. BaronThamesBank is the city official for this district and managed most of the construction on this part of the city. Many builds in this district are replicas of real life buildings with inspirations taken from Battersea Power Station in London and the MetLife Tower in New York.

After the expansion into the North-East island and subsequently the need for more building space had Inchmuir fill in swampland to the South to create the new Southern Island. Before the city was started in the early days of the server, a small water village had remained preserved here, only one standing structure remains of this old village.

Southern Island is not technically an island since it is still connected to the main continent on the very South side. A road at this connection provides access to Inchmuir Spaceport.

Located on Southern Island is Inchmuir Mall, Inchmuir's second largest shopping district (after North-East Island). The mall is a 6-story, partially underground complex with space for members to build their own stores in.

The Waterfront provides residents of Inchmuir to relax in the bars, restaurants and nightclubs on the island's West coast. The large boardwalk also houses sea transportation to the MRT Marina. The global headquarters for Kalmar Fried Chicken sits on the border between the Waterfront and the Business District.

Blob Studios includes several television studio sets with an impressive backdrop. The studio is owned by blobstudios and was used to film thomasfyfe's Snapshot segments and covers.