Moramoa is a Senator city in the northern Epsilon region of the New World. It was founded by megascatterbomb in October 2017.

Moramoa was founded in late 2017, with the unexpected return of megascatterbomb from a three-year absence. Moramoa quickly obtained Councillor in December 2017, consisting only of the Mega Mansion and a small number of builds on the peninsula. After this time, Moramoa remained largely untouched, with the exception of Megap Parkour.

In early 2019, Moramoa expanded at a rapid pace, thanks to the quick construction of a road network laid out in a similar fashion to Auckland, New Zealand. This led to Moramoa quickly gaining the rank of Mayor. Despite the road network's origin, almost all builds in Moramoa are completely original, with the notable exception of the Egyptian Gods guarding the eastern beach, which were based on 3D models found on the internet. The road network features street names from Auckland.

After reaching the Senator rank, Moramoa Mixed Martial Arts Airfield was built. The airfield was constructed with 18 plane gates and 18 helipads. Gates were allocated at will by megascatterbomb, with a priority being placed on unique destinations.

Moramoa Mixed Martial Arts Airfield is Moramoa's primary air facility. The airfield was built by MojangChan and megascatterbomb and was opened on June 7, 2019.

KiwiMetro is a CitiRail-style metro in Moramoa, with a unique implementation that allows different routes to be configured by only modifying the contents of a station's dispensers. This system also allows users to pass through stations on the way to their destination, which CitiRail does not have the capability for. Currently, only a single route is active between the Military District and Moramoa Mixed Martial Arts Airfield.

The "Kiwi" brand describes local services in and around Moramoa. 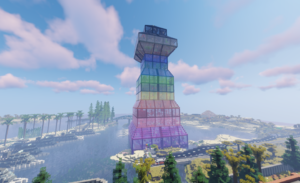 Megap Parkour, or simply known as Megap, is a parkour tower located on the shore in eastern Moramoa, south of the Port of Moramoa. The tower houses 301 levels of parkour of increasing difficulty. Each floor is assigned a different color, starting with white at the bottom and black at the top. It was constructed to be a more difficult version of the Murrville Parkour House

There are hidden skips throughout the tower, allowing individuals to skip a certain number of levels.

Currently, there is no recorded complete run-through of the tower with no skips.

Moramoa had a number of plans related to the town's infrastructure; however, the plans have since fallen through due to megascatterbomb's inactivity.

KiwiBus was a planned bus service that would have connected transit between major transport centers within Moramoa. International buses were planned to have a dedicated terminal that allows buses designed for right-hand-side roads to park at stops without modification.

The Mega-change was a project to connect two major roads, the B10 and the planned A11 together, while also providing entry and exit points to various parts of Moramoa. The interchange was planned to be based on the spaghetti junction in the Auckland CBD, as it maps perfectly to the number of roads intending to connect to the city. Roads connected to the Mega-change will swap from right-hand-side to left-hand-side driving, to allow easier entry to the town's internal left-hand-side roads.

Moramoa International Airport (MIX) was a planned airport intended to serve a larger amount of airports than Moramoa Mixed Martial Arts Airfield. It was going to also serve as the sole landing area for the Big Thing, an extremely large airborne aircraft carrier. Live updates on the pasting process of the Big Thing was to be posted to Breaking News NOW! when the construction of MIX was complete.