Sesby is a councillor on the New World built by 0rocketscience0. It is a part of the Epsilon Region and the Eastern Association of Serendipity Towns. It is served by the MRT Circle Line and the MRT Eastern Line. 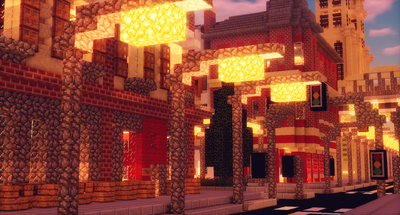 Started construction on the 04/10/2014. Mayor 0rocketscience0 wanted a city that reflected perfection in every detail. Something that will remain in your head once you see it. Sesby is detail, perfection, and realism all together. The first building to be constructed was the 'Sesby Town Hall' which is based of the Malmö town hall in Sweden.

The entire city was built to give the user a Dutch/German vibe. It got Councillor on the 23/10/14, a very well deserved rank which, unfortunately, will never be passed until now. One of the most astonishing builds in the city is the 'Sesby Cathedral', just north of the 'Central Station' It has been the main symbol of the city forever, counted also as the main landmark.

The city hosts the 'Port of Epsilon' which is the main Port for the Epsilon Region cities such as Airchester and Accerton. Finished construction in middle 2016. The city, during that time, also purchased 'IKEA' built by _Kastle. An incredibly huge build that was pasted north of the Epsilon Peninsula due to lack of space on the region. The Airchester-Sesby SMP never broke up, making it the oldest still-used SMP of the MRT World.