Lilygrove is a [Mayor] ranked incorparated town south of Dand. This town was founded by PaintedBlue on June 4th 2020.

On June 3rd 2020, PaintedBlue (who was still a guest at the time), decided to look for some land in Ward 5 to make a new town. When PaintedBlue got his membership on June 4th 2020, he built a roundabout with his flag and a few signs as a dedication to the creation of his town. Later he constructed the Lilygrove Public Library, which opened on June 4th 2020. This was the first building to be constructed in Lilygrove.

Later on June 4th 2020, i____7d asked to create NewRail FLR warptrain service to Lilygrove. After some time, PaintedBlue accepted the offer. He then started construction on Lilygrove Union Station to accommodate such trains. Then on July 13th 2020, train service began to the station. A few months later, more platforms were added.

On June 6th 2020, PaintedBlue started work on an apartment complex so that residents can live there, as well as getting him another step closer to becoming a citizen. It opened at 12:00 PM PST on June 7th 2020.

After only getting 1 councillor endorsement, PaintedBlue began building more buildings, the final one which was a police station. PaintedBlue and Lilygrove were then promoted to Councillor on July 22nd 2020. 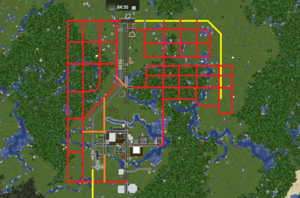 A map of the roads and connections Project Green would create in the town.

After getting promoted to Mayor after a 5 month development hiatus, PaintedBlue noticed that the northern end of the town seemed very disconnected from the rest. To remedy this, PaintedBlue issued Project Green, a development initiative intended to connect the ends together by increasing the amount of roads and buildings between them. This plan was also made to get the town about enough buildings to apply for Senator.

The Marion district is a district in northwest Lilygrove. This was the first district to be built.

The Woodland district is a residential district located in northeast Lilygrove.

All local transportation in Lilygrove is served by metroLily.

metroLily will have two lines on its metro system, being the green line, and the purple line. One will be a cart metro, and the other will be a warp metro.

Finally the Lilygrove Light Rail has one short line open, the blue line. It will eventually have two lines, when the orange line is added. This light rail has 3-section LRVs provided by Azure Vehicles