Whitechapel is named after the London district and is situated on the shores of Lake Corona. It was founded by _frozen on October 4, 2014 during the opening of the Gamma World, and its downtown is located near the  A11  Whitechapel—Waterfront Station in the Northwest part of the New World. The City Hall is located at the coordinates of -3550, 65, -2070.

West of the Corrigan lies the Columbia District. A large portion of the Columbia District is also known as the Sports and Entertainment District, it hosts the Liverpool Tennis Center, BART Stadium, the Palladium Theater, Whitechapel Broadcasting Centre, and the Western Beach. Further west into the woods is the planned center of the Columbia District, with this area focused on being a residence-focused neighborhood with a small town center planned on Columbia Island. Northeast of the Rivera District is the Seneca District, a farming district with Sheepshead Lake its town center. The original Seneca Town was a large southern portion of the district which was bulldozed to build the Whitechapel Sky Harbor Airport. Into the wooded frontier to the east, Eastvale District will eventually be built.

By June 28th, 2015 Whitechapel was able to come to an agreement with adjourning towns to establish a firm border. The borders are marked by wool on the ground, with Whitechapel border colored as dark gray, while Radiance Square boundary is colored light blue and West Calbar colored light green. The other boundaries that currently has no border agreements are marked by the  A94  freeway to the east, and the Seneca Canal to its northeast.

The Whitechapel City-State Government is run with _frozen as its prime minister, with yeamantor132 its honorary mayor and several deputy district ministers will be named later. The City-State Government is tasked with running the city system smoothly, ranging from making bids available to the public for transportation and city needs, to ensuring the Metro is run smoothly at any time.

Whitechapel also has several departments covering various things. The Whitechapel Airport Authority is tasked with making sure the airport is run correctly. It has currently contracted its terminal operations out to SonicTornado. Whitechapel Department of Transportation (WDOT) is responsible in developing a well-built street plan connecting the district to the main districts, and include specific design for freeways inside the city-state.

The Seneca Port Authority is the authority responsible for the multi-modal terminal located in Rivera District, and also operates the drawbridges to minimize delays for both the ships and the traveling public.

Whitechapel is the first city on the server to provide a bidding process for interested parties to bid for construction of projects. The best qualified bids, which must meet stringent time, money, and objective targets, will be approved and paid for their work according to their bid contract.

For more information, the bid process can be accessed at Whitechapel/Bids.

Examples of this being a success is the recent successful contest and construction of the BART Stadium, won by 6687kittycat. 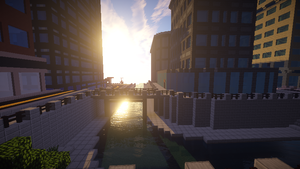 Waterfront Station is the main station of Whitechapel, and serves the  A  Arctic Line of the MRT System. It also serves as the main hub of the CitiRail system, serving the Polaris Line, the Venetian Line, the Seneca Line, and the Lakefront Line.

It also has an 8-bay bus terminal adjacent to the station, and a Ferry Terminal to the west of the station attached by a pedestrian overpass over Waterfront Boulevard.

Corrigan Northern Station, adjacent to  A12  Corrigan District (Whitechapel), is the CitiRail hub for the Northern part of Whitechapel. It has a bus terminal for bus services, and is adjacent to the Corrigan Ferry Terminal on the Seneca Canal.