Ryozu Airlines (旅ずの航空会社) is a predominantly regional MRT airline. It operates a growing regional and international network, with scheduled flights extending across the Old World and being planned into Gamma. Its route network is focused on Akane - Ishuzu Int'l Airport and Hamanei Municipal Airport. The company is headquartered in Hamanei, Akane.

Ryozu Airlines is a member of the OneMRT alliance, and co-ordinates services, bookings, flight times and destinations additionally with its partner airline ArdenAir; several codeshare flights are planned with a range of airlines. Regional flights are occasionally operated by RyozuDash under the Ryozu Airlines brand.

Ryozu Airlines was founded in late 2014 by the continuing CEO, Tarheelscouse, and joined OneMRT in January of 2015. By late January, Ryozu had completed a partnership agreement with ArdenAir, resulting in several bilateral agreements including shared ticketing systems, shared lounges and transferable rewards. Numerous codeshares are also planned, particularly departing from Hamanei Municipal Airport. Ryozu then left OneMRT in favour of UnitedSkies to become a founding member thereof.

The airline's official website can be accessed at http://tarheelscouse.wix.com/ryozuairlines.

Ryozu Airlines is headquartered in Hamanei, Akane, close to Hamanei Municipal Airport. The headquarters is planned to house a museum and tourist facilities in the near future, but currently remains the workplace of approximately 120 employees directly under the Ryozu brand.

In November 2014, at the time of the airline's creation, a basic plane livery was set out featuring turquoise and light grey highlights, and the recognised "blue flash" on the tailwing.

In January 2015, MRT Graphics submitted a logo design to corporate officials based upon the pre-existing blue ribbons on Ryozu plane liveries. This was accompanied by a new slogan; Forever blue skies.

As of early 2015, Ryozu Airlines operates 3 BTB-100s for flights departing from or terminating in Akane - Ishuzu Int'l Airport. Order books indicate the expected arrival of a fleet of smaller, regional aircraft for flights based from Hamanei Municipal Airport.

Ryozu Airlines is currently negotiating a delivery of wide-body aircraft from a potential variety of suppliers.

All seats are equipped with stowable tray tables, windows with blinds, reclinable seatbeacks and baggage space under the seat in front and overhead.

All seats are equipped with standardised safety equipment; including life jackets, oxygen masks, emergency lighting, and emergency directions in the seatback magazine.

BlueSkies is the frequent flyer program available to Ryozu passengers. The program allows those signed up to redeem free or discounted tickets, priority boarding, access to Executive Blue lounges and free or discounted car rental or hotel usage. BlueSkies frequent fliers can even upgrade to OneELITE membership, with benefits extending across the OneMRT Alliance. 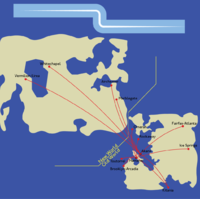 Ryozu Airlines is part of UnitedSkies and as such co-ordinates flights, destinations, bookings and airport runnings with fellow alliance members.

Ryozu Airlines is partnered with ArdenAir as of January 2015, and will seek closer integration with them in the future.

The renowned Executive Blue lounges are accessible to all priority patrons at Ryozu Airlines destinations where such lounges are established. Access therein can also be gained through redeemed points on the BlueSkies rewards program.