Airchester is a Premier city built by CortesiRaccoon. It is a part of the Epsilon Region and the Eastern Association of Serendipity Towns. It is served by both the MRT Circle Line and the MRT Eastern Line.

'Station Plaza' is as of now the oldest part of the city, situated south from the MRT Station. It's home to the 'Airchester Town Hall', the oldest building in town. It's construction finished on the 04/10/2014. Only 1 day passed and on the 05/10/2014 the small village was recognized as Town. From there, Airchester expanded East. With this expansion we see amazing buildings like the 'Epsilon Theater' which was back then the biggest and most advanced theater in the MRT, and the 'Running Water' landmark, which will remain the landmark of the city until Premier. 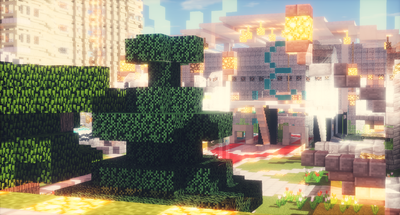 18/11/2014 was the date Airchester was officially recognized the biggest city of the East part of the server. Didn't pass long after it was recognized, in 20/12/2014, as a Big City and was allowed to make an airport, the 1st on MRT Gamma. 25/12/2014 the airport finished construction and it was a blast. The only one on the server, and companies were struggling to get a gate. It was the first version of the airport, which will follow a reconstruction after a few months.

Time passed, and Airchester was expanding very quickly, finishing neighborhoods like Desert, Business Center and Villa. A smaller Airport: 'Airchester Airfield' was built, which was the hub for Eastern Airways Heli Lines and Flight School. Road connection was built with nearby Sesby and Accerton allowing a better commute between the three cities of the Epsilon Region. And finally, on the 02/04/2015, Airchester was the first city (along with Achowalogen Takachsin) to get the Premier rank.

Following that Airchester's didn't grew, it just stood there, because the objective was reached. Just a few things happened after that day. Epsilon International Airport version 3 was built, along with 'Furling Park' (which is closed and soon demolished).

Coordinates: 8248,64,-32
Metro Station: -
The MRT Plaza is Airchester's landmark. It is a composition of 5 fountains symbolizing the years that have passed when the landmark was built. There's a continuous flow of water symbolizing time, that never stops. And this is what the server did too, It continued moving through time, opening the New World, adding new things, new members that come and leave. This is the real meaning of the Plaza. This place is also famous for the Epsilon Theater. Next to the Plaza, the Epsilon Theater, the first theater of the MRT Gamma world. Feel free to enter the theater. It's now a Museum. Explore the redstone behind it and how the theater worked.

Coordinates: 8294,64,-31
Metro Station: -
The Airchester Sandcastle Hotel was the first Hotel built in Airchester. His style and his luxurious rooms will already give you an idea of how fine this hotel is. Built in the centre of the city and following a classic Italian Style the Airchester Sandcastle offers spacious and comfortable rooms, all furnished with beds, desks and personal lights. From the top of the Hotel you will be able to have a really nice view of the Epsilon Theatre and the Beach Area of Airchester.

Coordinates: 8502,64,-45
Metro Station: -
The Airchester Lighthouse is situated on a cliff near Airchester Beach. It is a must-see attraction in Airchester. Being a city near the ocean, Airchester has a lot of boats coming in day and night in the Airchester Waterport. The Lighthouse is very important for all types of boats. If you head there you will be able to get to the top of the lighthouse and admire all Airchester. The Lighthouse has always been used and there is a staff member which keeps it running. It's really a great 360° view and a very romantic and amazing place to spend some time.

Coordinates: 8196,64,-168
Metro Station: -
The Lion Square is a square north of Airchester situated in the Business District, It is a statue representing two lions walking. As you may or may not know Airchester is "in love" with animals. The Lions symbolize the strength of the city, as strong as 2 lions. Around the Plaza you can find some restaurants and franchises. Next to the Square you can also find the Epsilon Cinema were you can go and watch a movie, just head down the stairs to the auditoriums to start the movie.

Coordinates: 8401,64,91
Metro Station: -
The Water Temple is a strange-shaped Pyramid in the south part of the Beach District. We don't know the meaning of it, and we also don't really know who built it. What we know is that it was built way before Airchester started construction by some kind of civilization. It's surrounded by trees and cannot be easily spotted. Let's see if you can find the secret entrance.

Coordinates: 8401,64,91
Metro Station: -
The Airchester Beach is situated near the Port of Airchester and offers sun beds and beach umbrellas. From the coastline you have an amazing view of the Lighthouse and the East Ocean of the MRT Server. Situated next to the Beach you can find a restaurant and a picnic area both situated in an Italian Traditional pinewood.

Coordinates: 8382,64,-78
Metro Station: -
Discover every kind of plants and flowers in the Airchester Botanic Garden. Take a tour and smell the variety of plants this collection has. It is a great place to just sit down, read a book or drink a cup of coffee. It's surrounded by a cage, so you cannot hear the outside noises.

Coordinates: 8411,85,-332
Metro Station: -
Are you rich? Yes? Then you are allowed to enter Airchester's Villa District. Home to the most expensive houses in Airchester. Situated on a hill, they offer the best view from a home, and a direct access to the sea. You want a house here? Well, they are all already sold out. 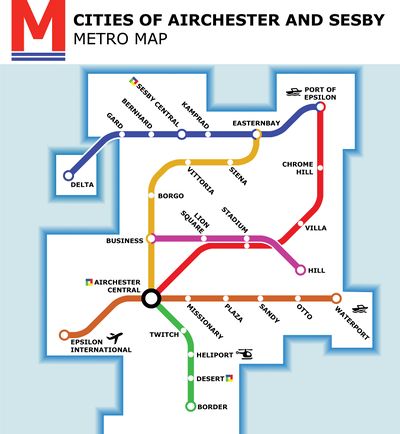 Transportation on the Epsilon Peninsula.

The Following stations are open currently: