Eastern Airways was an airline company founded in March 2013. It rebranded to Waypoint in 2018 after filing for bankruptcy. The majority of flights were moved to the new brand. 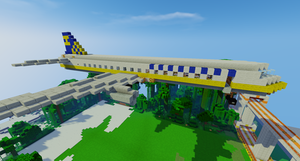 Eastern Airways started as a small airline company founded by qwolf1999 and infinity8838 with the name of Infinity Airlines during March 2013. The Fleet counted 2 B737-200 and 1 B777 with main hub at the MRT International Airport. The company had flight connecting MRT International to Miningstone and MRT Regional Airport. With the approval at the GSM for airports on the Old World, Infinity Airlines started expanding his network to the airports of MineCity and Fairfax-Atlanta and added to his fleet new aircrafts such as the E190. During this period Infinity Airlines merged with another airline company named Italiani Volanti, company owned by CortesiRaccoon, under one name: Eastern Airways. 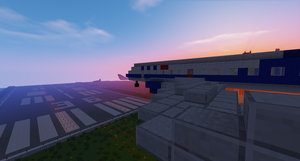 After the merge with Italiani Volanti a few episodes resulted in the CEO infinity8838 getting banned from the server. Co-CEO qwolf1999 wasn't able to keep up with the work and passed the Airline Company in the hands of sanyankeesfan20 that became the new CEO, along with CortesiRaccoon that became the Co-CEO. qwolf1999 soon became inactive and the airline company decided to have a 50/50 share between samyankeesfan20 and CortesiRaccoon.

Before the opening of the New World Eastern Airlines grew so much that had a Gate in 7 MRT Cities (90% of airports). Then, on October 4th 2014, Gamma opened and new Airports started construction on it. The first airport to be built was Epsilon International Airport, that soon became the main Hub for Eastern Airway's flights. At the First Eagle Awards, an honorary award for MRT airlines, Eastern Airways won the Honorary Category of Aviation Excellence for all of his great work throughout the years, issued because of his amazing well-built planes, routes and realism. At the Second Eagle Awards Eastern Airways received the Best Economy Class award along with the Best Airport of the server, Epsilon International, Eastern's Hub.

During 2016 Co-CEO sanyankeesfan20 became inactive and resigned. The Co-CEO position was take over by mine_man_. Eastern Airways reserved a full concourse at the newly built Elecna Bay International Airport making it it's second hub on the New World. For the event, Eastern Airways changed completely and ordered new A318's with a new Economy and Business Class, along with new liveries, colors and a new logo.

During this new ownership of the airline, Co-CEO mine_man_ accomplished many achievements such as bringing the airline into the largest airline alliance, SkyTransit, working with other airlines such as IntraAir and newly re-branded Caelus Airlines to set up a new hub in Cyra and a new focus city in the Akane region. Along with this came the growth of the airline, tripling the size of the company in only a few months. The new branding was implemented across the MRT with new lounges and destinations at many airports across the server.

In late 2016, Eastern Airways acquired the smaller regional carrier FlyArctic. Thus, the former CEO, PtldKnight has now joined the team. FlyArctic was used to operate flights in and out of Vegeta on the main airline's behalf. Also in late 2016, Eastern created its heli-line service, Eastern Airways Heli Lines, in response to the re-purposing of Airchester Airfield. The company later appointed CaptainChimpy to the role of managing the heli service, with additional operations carried out by Co-CEO mine_man_.

At the MRT's Favorite Airlines Awards Eastern, along with other airlines, won the price for Best Airline Alliance. One year later at the 1st Eagle Awards the company received the Aviation Excellence Award, an honorary award given by the academy for the realism of the airline. At the 2nd Eagle Awards the company also won Best Economy Class and Best Airport (Epsilon International Airport, owned by Eastern Airways).