Kazeshima is a town founded by i____7d on 1 March 2020, within half an hour of the Zeta Server's opening, on a remote and quaint island in Southwest Zeta, on Lake Gunto. This town features a Japanese ambiance, mainly inspired by modern Japanese cities like Tokyo and Osaka.

Kazeshima is pronounced "Ka-zeh-shi-ma" (duh). It is a romanised version of the Japanese name, 風島 (かぜしま), which means Wind Island.

Kazeshima was founded by i____7d on 1 March 2020, 1.20am SGT, after 20 minutes of inching to the location, restrained by massive lag. The first road built was Setsuritsu-odori (設立大通り), and it stretched from the center of mainland Kazeshima to Setsuritsushima, a secondary island separated by river off mainland. He then started on his own residence, a flagpole, and an FLR Kazeshima station (Setsuritsumachi station). The next projects were the Kazeshima Ferry Terminal, the city hall, the ForesInn, and an FLR Kazeshima office.

The spot was chosen as the founder, i____7d always wanted an island town, like how Singapore, Honolulu, or Jeju (irl); or GSM Town, Juhwa, or Hummingbird Islands (in the MRT) are so. It is also far from mainland (one needs to cross another island to get to mainland), which makes it harder to get to.

Kazeshima got councillor on 18 April, and mayor on 21 May.

The Flag of Kazeshima is made of three colours: white, light gray, and red. The background is white, representing purity. There is also a red horizontal stripe in the middle, representing freedom and justice. Two light gray diagonal lines (bottom-left to top-right) overlay everything, representing wind.

The flag was later voted as the Flag of Nansei-Gunto.

Kazeshima is located in southwest Zeta, in Lake Gunto.

Kazeshima also has some islands off the coast of the ice plains at the south east. (Eumi)

Kazeshima has a lot of islands. They are usually either close to the mainland, or far away in the middle of nowhere.

Kazeshima has a Japanese culture, with temples and shrines dotted around the city. Most signs are also bilingual as Japanese is the primary language.

Kazeshima also has vending machines dotted around the city, a regular sight in real-world Japan.

Kazeshima has a variety of parks for people to visit and relax in. Most parks also have a dog park/picnic field as well.

Kazeshima has a variety of street animals. It depends on which ward you are in.

Places with foxes have fox attractors dotted around the place as well. 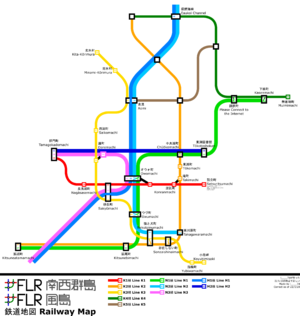 Kazeshima is laid out mainly in a grid layout. The road style is similar to that of Foresne's, just that the lampposts are slightly different.

If you want to serve Kazeshima, read this