Cape Cambridge is a city situated on a cape in the Zeta region of the New World owned by PaintedBlue. It is located in Ward 5 and located near Oceanside. The town is part of the Federated States of the New World and also the capital and largest city of the State of Meridia. The town style differs from district to district. It strives to go with a semi-realistic feel.

Cape Cambridge was founded on September 18th, 2020 after PaintedBlue's original town of Lilygrove seemed very unsatisfactory to him. Furthermore, PaintedBlue was losing interest in building in the town of Yalebrook. Therefore, he decided to make a third town that could get him up to Governor. He was thinking of building across from Oceanside to expand Meridia, however there was a town there already called Grafton. After doing some research on the town, he built a road and called it Cape Celina. However, Celina was already a town, and it didn't make sense to call it that, so he renamed it to Cape Cambridge instead. He then planned out roads, expanded the original road, made city blocks, and planned out some more.

Later on, he wanted to help make a ferry service between his town, and Oceanside, so he built a seaport which could only serve Lake 49 at the time. Eventually, a canal was built between lake 49 and lake 20, allowing more sea connections to be made. During the September 2020 ISM, he IATd the town of Grafton, and started a rail link to the other side (which he gave to Oceanside). He then demolished his side because he wanted to build an airfield there later. PaintedBlue has plans for a spaceport as well on the East Cove area later. Eventually, PaintedBlue managed to acquire the rank of Councillor for the town, making it his second ranked town. Cape Cambridge eventually obtained the rank of Mayor as development on the town swiftly increased. On the 14th of March, PaintedBlue submitted the town for Senator, and on March 28th, was approved for promotion. Currently, PaintedBlue is attempting to attain the rank of Governor for the city.

As the city was expanding, PaintedBlue decided to make use of the peninsula near the seaport. He then began work on the Seaport Village Project, a project that would turn the rest of the peninsula into a car-free waterfront shopping and dining complex. The city is also set to host the 2021 MRT Summer Games, with the MRTSG Complex being built recently for it. 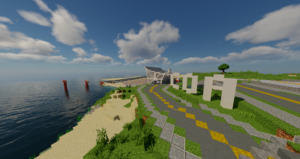 Cape Cambridge Orilla Airfield at noon from the east

Inter-city transport is mainly done by boat. Hummingbird Boat Lines started the first route to the seaport and out. BayLink operates cart rail from Cape Cambridge-Grafton District to Oceanside-West Point. Air and heli services are offered at the city's airfield and heliport. MARC warp rail service is also planned.

Water transport is the main form of transport in Cape Cambridge, and is managed through the Cape Cambridge International Seaport. It offers several boat lines and seaplane flights out of it to other cities.

Newrail operated the first rail line between Cape Cambridge and Oceanside. Future rail lines from MARC will help people in and out of the city.

Internal transport is managed by BayLink, which operates both the cMetro and cBus service. 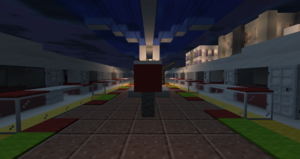 Cape Cambridge is split into many different neighborhoods and districts usually based off of zoning or geography.

The Embarcadero is a small commercial district in South Cambridge. It contains some commercial areas, as well as office spaces. It is the cities primary transit hub, being home to the Cape Cambridge International Seaport. 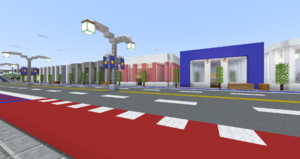 Downtown is the main high density zone and urban center of the city. It contains many offices and apartments, along with the Piazza dell'Unità, a square in the heart of the district where many food and shopping options are available. This district also has the John Glenn Transit Center, a major underground intercity rail station that serves the city.

The Government District will be where most government buildings will be. Most embassies will be located here, along with the Meridian Capitol Building.

Pinewood will be a small urban district and also the southernmost district of North Cambridge.

Grafton is a small neighborhood located on the Grafton Peninsula formed from the east point of the former town of Grafton. It is the home of Cape Cambridge Orilla Airfield.

The Space Coast district will be a district spanning the entirety of the cape on eastern South Cambridge. It will be the home of the South Zeta Space Center upon reaching governor.

Beachfront will be a small suburban neighborhood which is situated on a tip of the western end of North Cambridge.

Punto Norte will be the northernmost point in the city. It will also be the largest district in the city upon its completion. It might hold more houses, and is planned to be home to Cape Cambridge Neil Armstrong International Airport upon promotion to Governor. 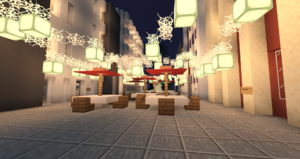 The Piazza dell'Unità lit up at night

Maxwell Park is a park located in the Embarcadero district. It was made primarily to add some green space in the city.

The Piazza dell'Unità is a small piazza located in downtown Cape Cambridge. It houses several shops and food options. The piazza was inspired by the Piazza della Famiglia in the Little Italy district of downtown San Diego.

The Shirley Peaks National Park will be a national park located on the mountains next to the town. 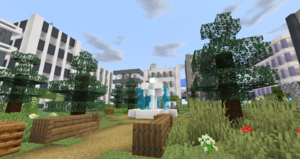 The Meridian Capitol Building is the building where the Meridian State Assembly operate and decide laws for the state of Meridia.

The Alan Shepard Memorial Theater is a theater for hosting events. PaintedBlue originally made it in case of the unlikely event he manages to win an MRTvision Screenshot Contest, and needs a venue to host it in. The theater is the first building in the town to be made using a CAD software.

Seaport Village is a waterfront shopping and dining complex located at the end of the Embarcadero Peninsula. The whole area will be car-free, and transportation will mostly be done via footpaths and bikeways. The complex is inspired off of San Diego's Seaport Village.