Farwater is a city on the MRT server. Originally inspired by Los Angeles, California, Farwater shares many of the real-world city's characteristics, including its desert and beach location, diverse neighborhoods, and extensive road and freeway-based infrastructure. As a consolidated city-county, Farwater lacks the military force often used by city-states, yet still has enough power to impose sales taxes and make its own legislative decisions while remaining independent of MPOs.

Farwater's flag is a simple black and yellow bicolor flag which is meant to resemble a two lane road.

Farwater was founded on October 4, 2014; the opening date of the Gamma server. The town was intended to be built on a beach, and the eastern terminus of the Expo Line proved an ideal location due to the quick accessibility through warp booths. The first building constructed was the LiterAlly Gas Station, and more buildings followed soon afterwards, forming what is now known as Downtown Farwater. Farwater was designed with uniform standardization in mind, especially in its extensive road system, so that it will be easier to expand and connect it to other cities when it grows. As such, when the town grew, the Farwater Skyway was expanded to both Ellesume and Los Angeles, and its auxillary route, the Altos Skyway, was completed, linking the new Westside neighborhood directly to Downtown via a freeway. More buildings are currently being constructed in both Westside Farwater and Beverly's Hill. On January 19th, 2019, the ownership of Farwater was passed to the current mayor, Cact0. 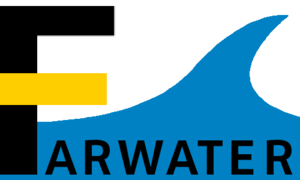 The city's logo depicts a wave, emphasizing its shoreline location, and includes black and yellow color elements from the city's flag.

Downtown Farwater is the oldest and most diverse part of the city, conveniently located near the Purple Hydrogen Beach. The Downtown area contains many important and historic buildings, such as the MRT Station, City Hall, and the original LiterAlly Gas Station. The premiere location, diverse culture, and lower number of total residences in the downtown area cause it to have some of the highest land values and real estate prices in the entire city.

Farwater's Westside neighborhood is a vast sprawl of low-density construction in the desert west of Downtown Farwater, in an area mostly enclosed by the Farwater and Altos Skyways. Westside is a predominantly residential neighborhood, although it also contains some businesses, such as the Farwater Cornerstore, Quickscope Guns, and Motel 1. Most of the residences in Westside Farwater are low-quality, quickly constructed buildings; this as well as Westside's higher residence count compared to Downtown contributes to a decrease in land value and extremely low real estate prices, making it a perfect place for first-time buyers to find a cheap place to stay.

Beverly's Hill is an affluent, low density neighborhood being constructed in the hills southwest of Downtown Farwater. Like Westside, Beverly's Hill is for mostly residential use, yet is home to some businesses such as the Beverly's Hill Community Bank and the Farwater Cloud. Favored by wealthy entrepreneurs and movie stars, Beverly's Hill is the place to go to find the most expensive properties in the entire city: each home is large, modern, and uniquely designed for the hilly environment, and a district-wide tax premium restricts business development to cater only to the needs of Farwater's wealthiest residents.

Farwater is located at the  XE26  Farwater station, the former eastern terminus of the Expo Line. The rail line runs east/west across the center of the map, and has connections to both smaller towns and major metropolitan areas, including Central City, Achowalogen Takachsin, Sealane, Kenthurst, Vermilion, and Ilirea.

The Farwater Skyway, known as the Desert Shore Highway outside of city limits, is an inter-city road that is part of

. It serves the downtown and coastal areas of Farwater and is offered as a faster alternative to the city's street system inside city limits. The road's eastern terminus is in the nearby town of Los Angeles, and its western terminus is in the Ellesume. The road is 4 lanes wide throughout its entire length, constructed as a controlled-access freeway within city limits and an at-grade highway outside of the city.

. It serves the residential areas of Farwater's Westside neighborhood; it too is offered as a faster alternative to the city's street system, connecting the suburbs directly to the heart of the downtown area. In a short stretch in the Downtown and throughout most of Westside's residential area, the road is known as Altos Street, a 2 lane grade level road containing intersections with traffic lights. The remainder of the road is 4 lanes wide and is constructed as a controlled-access freeway similarly to the Farwater Skyway.