CreeperCola is a multi-server fast food franchise founded by Diemundz in late 2012 and first constructed on the MRT server in July 2013. CreeperCola specializes in serving premium freshly-made handcrafted beverages, such as sodas, potions, waters, and more. CreeperCola is currently headquartered in the CreeperCola Tower in Skyscraper City at  B21  Skyscraper-Arden, and has a multitude of locations on both the old and new worlds.

Similar to Dave's Doughnuts, CreeperCola was originally founded on a singleplayer world, but has since grown with established locations on many different servers, including the MRT server. The CreeperCola Company currently has locations on over 6 different public and private servers throughout various sandbox games.

The CreeperCola One restaurant is the standardized design for use on the MRT server. This standalone design has dimensions of 10 x 7 x 4, which does not include the signs and torches found on the exterior of the building, and serves all items on the standard menu. Restaurants are typically red buildings with a white stripe in the middle, and have spruce frames and floor construction. After entering the front door, the counter and kitchen are can be found on the left side of the building, and two booth-style tables are located on the right. Notable variations of the design have been made to suit certain locations such as the Northeast Waterport, the MRT Mall, Atlantis, Kolpino City, and Espil.

As of July 5, 2016, a smaller, open-air design called the Classic Stand is also available for purchase. This design, based off the original CreeperCola restaurant on Diemundz' singleplayer world, is slightly smaller, with dimensions of 7 x 6 x 4, not including the signs and torches found on the exterior of the building. This restaurant's lack of seating makes it ideal for use in parks and food courts, and an included vending machine can be used when the restaurant itself is closed.

All CreeperCola Restaurants, including both prefabricated and custom designs, are built without the assistance of WorldEdit.

The standard CreeperCola menu, which is available at all locations, is as follows:

Some larger, more specialized locations may offer some or all of the following menu items in addition to the ones listed above:

Item pricing is not enforced at most locations. However, if you want, you can optionally send Diemundz a tip for his hard work in making and maintaining the restaurants. 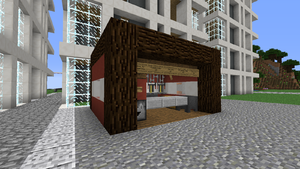 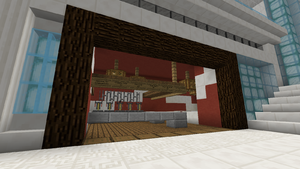 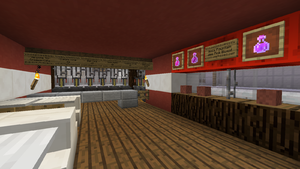 A custom mall-style location with a soda fountain at Skyscraper City. 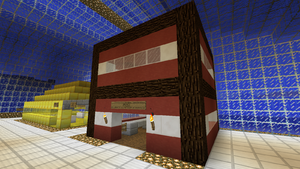 Getting a Restaurant in Your Town

If you want a restaurant in your town, contact Diemundz either through in-game chat, on his user talk page, or using MRT Mail; he can build one in your town for the base price of only $5.00! All new prefabricated restaurants will be your choice of either a CreeperCola One or a Classic Stand design by default. However, a special adaptation of the design can also be requested for use in malls, food courts, and other places where the normal design cannot be built due to limitations of any sort. As custom designs and standalone locations involving heavy landscaping typically incur higher charges, price quotes are available upon request prior to construction. Please do not build restaurants by yourself or copy and paste them from another location, as they will not be marked as official and/or put on the wiki.

In addition to its dedicated restaurants, CreeperCola is also served as a beverage at the third-party locations listed below. Though these locations serve the same types of products found at regular stores, they are not owned by the company itself.

Getting a Beverage served in your Restaurant

If you want our beverages to be served in your restaurant, contact Diemundz either through in-game chat, on his user talk page, or using MRT Mail; he can install the necessary equipment for free, or you can choose to install it yourself. Please make sure that you have room for brewing equipment and/or a soda fountain at each desired location, as well as having extra room on the menu for the new products before requesting installation. If you decide to build/install equipment or make alterations to your restaurant's menu by yourself, please be sure to update this section of the wiki for each location currently serving beverages.

The World of CreeperCola Atlanta is a museum based off the World of Coca-Cola Museum in real-life Atlanta, Georgia. The museum contains many exhibits and attractions, such as a wall of memorabilia, movie theater, restaurant with free beverages, soda fountain, store, and more. Come visit it by traveling to the  G4  Hillville MRT station and going west along Peachtree Street.

CreeperCola strives to provide the best customer service possible. If restaurants require major maintenance, relocation, and/or removal, please contact Diemundz rather than attempting to resolve the problem yourself, as all buildings are private property and it may result in a warning. If you encounter a problem with one of our restaurants, please contact us with the location of the incident and we will attempt to resolve the issue as quickly as we can. We apologize beforehand for any inconveniences you may have while dining at CreeperCola.

Thank You For Visiting!