Eagleshore is a town built near the MRT Western Line, currently ranked Mayor.

To get there, the fastest and simplest way is to use the A8 and take the exit to Eagleshore or to take BluRail from Spring Valley.

The town was originally built around Lake Eagleshore, a former city park (eventually replaced by Eagleshore Spiral in March 2018). Prior to destruction of Lake Eagleshore, Lake Road ran around the lake. What was the original Eagleshore is now officially the Downtown District. Lake Road and the rest of downtown has been replaced by a pedestrian zone, modeled after the ones in Germany. 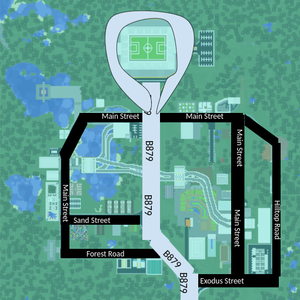 Eagleshore is divided into districts

On May 6, 2018, Kel5 resigned from the position of Deputy Mayor. woorich999 was the temporary stand in. On May 14, 2018, Talon decided to upgrade woorich's DM status to permanent. However, on July 4, 2018, Talon removed woorich from DM and replaced him with KittyCat11231

There are 43 builds in Eagleshore, as well as 4 defacto builds. All builds with only an address are houses, unless otherwise indicated

There are 19 builds in Downtown, as well as 2 defacto builds.

There are 8 builds in the Hillside District, as well as one defacto build.

There are 16 builds in the Nivtat District, as well as one defacto build.

The A8 was the first ever road connection to Eagleshore.


After a GSM Proposal, long talks with the United Cities, a few private meetings with Skelezomperman, and a few weeks of waiting, Eagleshore had gotten the permission to build the B879, a B-Road connecting the A8 Eageshore's Franchise Road.

Mayor TalonPlays asked for a bus service when the A8's interchange with Eagleshore had finished. When given an option, Talon chose to use Prime Bus as the company to provide buses and warps to Central City

One of the biggest reason Eagleshore had so many denied promotions for Councillor was because they had no sidewalks. Toward the end of March 2018, Kel5 started to put sidewalks on Main Street, between Eagleshore Bank and BluRail Metro Station. However, this was the only work done on sidewalks for a few weeks before TalonPlays put sidewalks in over the rest of Eagleshore's roads. On April 7, 2018, Eagleshore had officially finished sidewalks.

Eagleshore had never finished the completion of the intersection of the Parkway (formerly Expressway) to Lake Road (pre-demolition) or Franchise Road. On April 7, 2018, SkyjumperTalon completed the interchange with Franchise Road, and announced a ring road around Eagleshore Stadium to complete the other end of the terminus. This wasn't finished until early May.

Transit in and out Eagleshore comes in many different ways

This is a complete list of all housing in Eagleshore

The Ectil Apartments is the second tallest building in Eagleshore, and was the tallest in Eagleshore for a long time before it was overtaken by The Claytrium. It has 9 floors, 7 of which have housing. All apartments cost 5 dollars.

The Ender Apartment Complex is a 3 story building in the heart of downtown Eagleshore, with 4 rooms