From Minecart Rapid Transit Wiki
Kanto redirects here. Please go back to the page that linked you here and correct the link.
Jump to navigation Jump to search

Kantō (commonly written as Kanto for simplicity) is a city located in the southern and far eastern area of the New World. The general style of the city is based largely on urban Japan and Taiwan.

Kantō is governed largely by the mayor, with the deputy mayor assisting as well as the five main commissioners of the military, foreign affairs, internal affairs, citizen welfare, and finance. Legislative duties are under the charge of the Speaker of Senate, and judicial issues are resolved under the Chief Justice.

The government is headquartered in the Government Ward within a number of buildings, largely consisting of offices for the five commissioners' departments. The heads of each branch as well as the Executive Function have offices located in the City Hall, while the 51-seat State Senate has offices and meeting areas in the City Assembly Hall and Offices, and the 3-justice State Court resides in the City Courthouse.

Kantō is divided into several wards for local governance, most of which serve a specialized and unique purpose. The city center will consist of the Business, Commercial, Education, Entertainment, and Government Wards, which are roughly divided by rivers and will meet in the center of the city. Surrounding areas will consist of Beach, Industrial, and Military Wards with remaining space used by multiple residential wards, as well as some secondary commercial wards.

Traveling around the city will be greatly focused on public transportation, from commuter rails to buses. All transportation services and hubs within the city as well as some services to the surrounding Tōkaido Metropolitan Area are operated by Kantō Railways.

Notably, all roadway vehicles and trains drive on the left side, unlike most other cities. 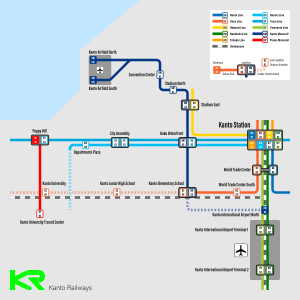 Commuter rail will compose of the majority of the rail network. The overall network will resemble four through lines angled roughly the same from each other and meeting at a central station, with two loop lines, one in the downtown area and one near the city perimeter. Towards the center of the city, the cardinal directional lines will serve as express trains while the other lines on the same tracks will serve as local trains. All rolling stock consists of E233-series 3-car trainsets.

Metros, light rails, and monorails may be considered for use, with metros and monorails serving a limited number of wards and covering unserved areas by the commuter rail, and light rail serving as more local service in single wards.

The Yamanote Line is planned to run in a loop along the outer perimeters of the city and connect to all of the other commuter rail lines.

The Chūō Line is planned to run in a loop along the downtown area of the city and serve as a connector among all other transit services.

The Namboku Line is planned to run north-south through the city.

The Tōzai Line is planned to run east-west through the city, following a rough path north from the beach areas, then curving and heading almost directly east.

The Nansei Line is planned to run from the southwest of the city to its center. Its overall path outside the central area has yet to be determined.

The Nantō Line is planned to run from the southeast of the city to its center.

The Tōhoku Line is planned to run from the northeast of the city to its center.

The Hokusei Line is planned to run from the northwest of the city to its center.

The Kantō Monorail is planned to run from Kantō Airfield to Kantō International Airport via the Entertainment and Business Wards. The line is operated by 10000-series 3-car trainsets. At Kantō Airfield, monorails will alternate arriving at Terminal 1 or Terminal 2, splitting tracks just after Kantō Convention Center.

The Plateau Monorail is planned to run from Poppy Hill Ward through the plateaus in the southern areas of Kantō. The line is a suspended railway and is operated by 5000-series 3-car trainsets.

The Hokkaidō Shinkansen runs from Kantō Station to Fort Yaxier Central Station, with a possible extension to Formosa. The line is operated by H5-series 10-car trainsets.

Kantō Airfield is the second largest air facility in the city, with 10 plane gates and 8 helipads. It is served by the Kantō Monorail as well as both Chihiro Ogino Road and [Unnamed] Road.

Kantō International Airport is the main air facility for the city and surrounding regions, and is served by the Yamanote and Namboku Lines as well as Hisaishi Avenue.

An intracity helicopter shuttle service operated by SkyTrans flies between these air facilities as well helipads on top of the Kantō City Assembly Offices (KTC) and [TBD].

Driving is slightly different in Kantō due to major avenues being subdivided into four median-separated sections (two express for better travel and two local for accessing buildings and curbside parking). At the intersection, inner lanes may only continue straight, turn right, or cross into the outer lanes, while the outer lanes may do the same but may only turn left instead of right. Lane interchanges located along the road and intersection lane changes facilitate vehicles needing to get to the proper roadway section for the appropriate turn lane.

Bus stops on major avenues are located on the outer medians immediately before intersections, and thus next to crosswalks for the passengers.

Buses mainly serve as shuttles to and from rail stations, and as a more mobile version of the light rail.

Note: Buses are bidirectional at Kantō Stadium and Kantō Convention Center. At Kantō Airfield the bus is unidirectional from Terminal 1 to Terminal 2.

North-south roads listed from the east:

East-west roads listed from the north:

Note: roads with matching superscripts indicate that they are the same road, but have changed orientation/relative location at least once.

Several rivers are located within Kantō as well as a large ocean, the former of which are used for river cruises and as well as small-scale recreation. Ports along the ocean shore will provide boat access to other cities.

One interesting aspect of the station is a train departure chime located on four of the platforms: between tracks 3&4, 5&6, 11&12, and 13&14. The chime is an arrangement of four measures from the sixth movement of Leoš Janáček's Suite for Strings.

Tracks are numbered from north to south or east to west, starting from the top floor.