Sunshine Coast is a Premier city and is the largest city in Bahia. The city is a major economic hub for the southeast, housing the headquarters of multiple corporations, and is a major center of information technology. The city is located on an isthmus of land between Lake Thanos and the Southern Sea, which means it is sheltered from high sea waves and protected from invasion. With a metro population of more than 14 million people, the city is fast becoming a powerhouse in the southeast. Its port handles more than three million tons of cargo per year, and it is one of the MRT's largest tourist destinations.

The history of Sunshine Coast begins far before the city was founded. Sometime in September of 2016, before the Epsilon era began, a guest by the name of Citybuilder__ joined the server for the first time. He stayed on the server as a guest for two years, flying around and exploring a world with endless bounds. Eventually, he began to notice that there were almost no tropical resort cities. Originally, he had not felt the need to apply for member, but now, 'he had a mission.'

He flew down the southern line, and discovered a station located in a beautiful valley, and knew it was going to be the home of his city. He applied for member, but unfortunately his application was rejected, and he went back to his original role on the server of flying around and being silent. In this time, ModernArt claimed the station he wanted. But then, one day, when he was exploring, godzilltrain messaged him, asking why he hadn't re-applied. He applied again, and while he was flying around a new area south of the MRT station SE23, he was promoted to member by godzilltrain.

After getting member, he immediately went to work, placing a red block with a sign on top marked "Sunshine Coast". This day, August 18th, 2018, is the official founding of the city of Sunshine Coast. He began building a road network on the island, creating a roundabout and multiple roads.

He constructed a big palm tree, and said in chat "I think I just created the coolest palm tree on the server" Conric005 tpa'd to him, and this is the beginning of the alliance between Conric and Cacto that persists to this day. He created a business (Sunshine Bank) and a home in Sunshine Coast, and was promoted to citizen by hvt and Kastle on August 30th, 2018. This began the age of expansion for Sunshine Coast.

Citybuilder_ promptly got to work on Downtown Sunshine Coast, and soon was promoted to Trustee while eating some pizza by Kastle. The city of Sunshine Coast officially became a town on September 15th, 2018, with Conric005 as its Deputy Mayor. Citybuilder_ continued to work on the town, and although it was rejected for mayor by both Tom_Pairs and godzilltrain, it was accepted on September 23rd. In the period between Mayor and Senator, Citybuilder_ expanded the city exponentially, constructing the Flagstaff Mesa district, a new port, a national park, and the first part of the B191. He constructed the Flagstaff Mesa Dam, (Thingy Dam) which provides much of the city's power supply.

Finally, sometime between October 1st and October 10th, he applied for Senator. He had decided to apply due to Cookie46910 saying that his city was Senator quality, and although CityB didn't believe this, he applied. Two weeks later, he got on the server for a few minutes and ended up getting promoted to Senator.

After the city got promoted to Governor, immediately work began on the Sunshine Coast Expressway tunnel under Capital Mesa. The tunnel was completed in a day, and the freeway finally arrived on the opposite coast of Maspalmas Bay. An interchange was built, and construction began on Sunshine Coast Máspalmas International Airport. The airport was approved and pasted a few days later with the help of _HeavenAngel_. At this time, it only had a few gates, but this would later change. Soon, Maspalmas became a thriving resorts district, with hotels, beaches, a theme park, and other attractions. The Sunshine Coast Freeway was extended west to the B191, bypassing Wooridge. The Suburb of Palm Valley was founded along this highway, with over 20 homes. Soon, Sunshine Coast had over 100 buildings, and Cact0 applied for Premier. He was worried about Sunshine Coast not being large enough, so he expanded in every direction, filling the empty areas of the city. A port was built near SSR, a small naval base in midtown was constructed, and many other small cosmetic changes were applied to the city. A few days before the gsm where SSC would be considered for premier, SSI terminal 2 was pasted in, adding many more gates to the airport. The city, to Cact0's surprise, got an overwhelming "yes" vote for Premier.

Sunshine Coast got premier in February, and after that, development on the city generally stalled. Work will continue in the future, especially in the suburbs.

Due to close proximity to the equator and the warm Lake Thanos, the city experiences tropical climatic conditions, typified by hot and humid weather throughout much of the year. It has a tropical wet and dry climate (Köppen: Aw). Annual rainfall is approximately 1,100 mm (43 in), and in a normal year there are two rainy seasons: "the long rains" in April and May and "the short rains" in November and December. Additionally, there are over 270 sunny days per year. Monsoon thunderstorms are common in all months, and can generate rapidly off of Lake Thanos and drop torrential rains over the city. Hurricanes are rare, but do happen. Major hurricanes include Hurricane Adam, a Category 5 storm that devastated the city in 2018, Tropical Storm Bella, which brought torrential flooding rains to the city, and Hurricane Chris brought damaging Catagory 3 winds during Christmas Day. The water of lake thanos is a constant 23c-26c temperature, perfect for the development of Coral Reefs, including notable ones such as Coral Beach. Sunshine Coast´s coral reefs are generally healthy, but in some areas, high tourism is damaging the reefs. 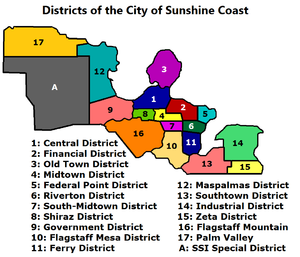 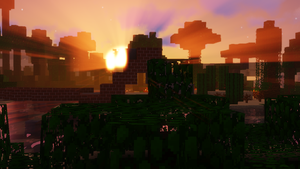 Old town is the oldest section of the city, and most of the most historic buildings in Sunshine Coast lie in this district. This is where Cact0 founded his city immediantly upon becoming member by placing a single red block with the sign "sUnshine coast" on it. The sign was removed, but the block still stands as the first block ever placed in sunshine coast and the first block ever places by Cact0 on the MRT. Other buildings in this borough are the former city hall, which is now a museum, the former SunshineBank headquarters, multiple embassies, Cact0's first home, and the burnt out remains of the first capital of the People's Republic of Sunshine Coast, which was destroyed during the Sunshine Coast Civil War. 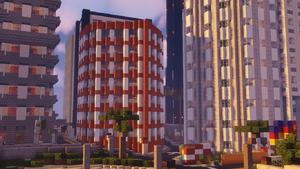 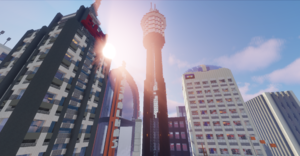 Downtown Sunshine Coast is the major hub of economic activity in the nation, as well as the seat of the central government. Founded after Cact0 got Citizen, Downtown's first building was a terrible looking white skyscraper which was the headquarters of Sunshine Bank until it was demolished and replaced by the Central Administrative Building. Downtown is home to almost all of the city's skyscrapers, and you can find the National Capital Complex here, too. 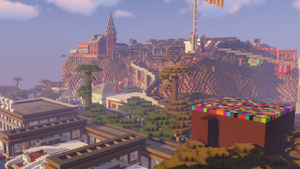 A view of Flagstaff Mesa towering over the stores of South Downtown.

Flagstaff Mesa is a suburban area on top of a mesa of the same name, and is the only extensive suburb in the city of Sunshine Coast proper, with most of the city's suburbs being either separate towns founded by Cact0 directly next to the city or towns founded by other people along the lakeshore. Flagstaff Mesa was named after the giant flagpole placed upon it shortly after Cact0 began construction on Downtown. This Borough is also home to the Sunshine Coast waterport, which was built right before Cact0 got trustee, and then demolished and reconstructed right before he got Senator.

Sunshine Coast's local TV station is Sunshine Coast Broadcasting Network (SSCBN), operating on callsign NSSC. It consists of the main channel, a repeated broadcast of KBS Kids from Kevtropolis (the only non-communist media in the area), a horse channel, a music channel, and a government channel.