The Mole 3: The Third Treachery

The Mole 3: The Third Treachery, known colloquially as The Mole 3, is the third season of The Mole. 12 players, one of whom was the Mole, competed over ten episodes. The season was held during June 21, 2014 & June 28, 2014. The maximum possible pot was 200,000 diamonds and the quizzes were nine questions, and the final quiz was twenty questions. 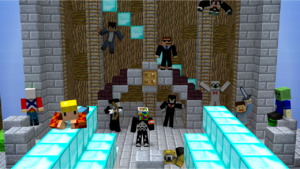 Teamwork Relay: In this challenge, each player had to choose a set of colored parkour, and starting with white, the person had to complete their set of parkour before the next person can start their own. Everything was smooth sailing, until things started getting difficult which started to make some players fail their jumps and have to restart. If they completed, the challenge, they would be reqarded with 2,000 diamonds, however, if they group did not complete it, every section complete is worth 100 diamonds. The last person to try, but did not succeed was wilywonker. The team earned 900 diamonds that challenge.

Penalty: Players kept punching each other after constantly told not to.

"Once upon a time, Music3_0 stared at a clock. He was waiting to move a diamond block. While Frumple was waiting with all of his men, he grabbed his book and counted to ten. Music3_0 and Frumple came together, laughed while eating cookies, made it all better. Once the party was over with all the admins, Music3_0 felt that they were kin. As Music3_0 played the wait disc, on his jukebox, he noticed Frumple had chicken pox. They rushed to the hospital to get him care, and chiefbozx made a firework star, to make a flare."

The items that were supposed to be placed on the wrong side was a compass, bookcase, emerald block, cooked salmon, cake, ward disc, stal disc, note block, fire charge, and a poppy.

The team successfully earned 1,300 diamonds for getting at least 13 out of 17 right.

Thanks For The Memories: The players too turns uncovering squares trying to make pairs. If a pair was incorrect, then it must be covered back up. They must find all the pairs under 25 moves to earn 500 diamonds. They failed, and earned 0 out of a possible 500.

Penalty: Players kept punching each other after constantly told not to.

Come Come Piggy Piggy: The group was told to split into two teams of three and one team of four. Each team must wrangle all pigs into each pen, one pig per pen. Each pig wrangled in the first group is worth 100 diamonds, totaling the first group as 800 total possible. In the second group, each pig is worth 500 diamonds, which totals the second group as 4,500 diamonds. The final group is worth 1,000 each, which totals that at 8,000. The total possible is 13,300, and the team earned all the diamonds in this challenge.

Bird's View Maze: The ten players remaining will split between the guiders and the movers. The guiders will pair with a mover and the group will receive a turn order. One their turn, the guider will be flying about the maze and guiding the movers through the maze. If everyone is through in 10 minutes, 1,250 diamonds are possible, each group completed is 250 diamonds. The team earned all the 1,250 diamonds.

Apply Pressure Plate: The group as split into two teams, one team of two, designated as the captives, and the other team with the rest of the players, designated as the Rescuers. The rescuers had to go over many pressure plates and the captives must tell the recuers when the lights go off to tell them to stand on the right pressure plate. The team failed and the team earned 0 diamonds out of a possible 2,250.

The Half-Thief: The mole has stolen half of the teams diamonds, and if not found in 15 minutes, their diamonds would be lost, if found, 4,000 diamonds would be added to the pot. There were two clues to help find the diamonds. The diamonds were hidden at the MRT International Airport The first clue stated:

The first one meant the year that slavery was abolished in New Jersey, which is 1804, The glowing redstone's ID is 74, and the symbols represent the number keys on your keyboard, and if you look at them, they represent 2851, but with a negative, so -2851. Those numbers were the coordinates of the location in the MRT International Airport where the diamonds were held. The second clue stated:

All the clues referred to the location of the diamonds inside the MRT International Airport at the Pho 26.

You Build What You Sing: The players were split into two groups, 6 good builders and 2 good eyes. The two good eyes were Max4344 and KittyCat11231. The rest of the group chose a room and were given a song and artist, and in 10 minutes, they had to build it. Each correct was 1,000 diamonds. The songs that were given to the players building were:

They got none correct, however, Cortesi broke the rules and built over the obsidian barrier and built one letter and one number (rule was to build one letter OR one number), causing the team to lose 1,000 diamonds.

Storm The Castle: The remaining players were teleported to Inchmuir and on front of Fyfe Manor. They had to find an exemption in the mansion. To get to the exemption, a player had to find the projector room and look inside the hidden projector. Cortesi found it was offered 1,000 diamonds, and accepted it. Little did he know that if he refused it, he would be offered 3,000 diamonds, and if refused that, offered 5,000 diamonds. Cortesi stated he did it because of his penalty last challenge.

Episode 6 - "And I Put My Hands Up" -computerghost

Karaoke Night: This challenge was not told to players was happening. They were asked "Who wants to practice for the challenge?". Little did they know, the four people, Max4344, Soleurs, KittyCat11231, and computerghost are the only ones participating in the challenge. Once announced it was the challenge, the four people had to completed the line of the song randomly selected by the radio.

Max4344 had the song Girl On Fire - Alicia Keys and had to complete "Got our head in the clouds, and we're not backing down...". He answered incorrectly and the correct answer was "This girl is on fire".

Soleurs's song was Stronger - Kelly Clarkson, and his line was "You heard that I was starting over with someone new, they told you I was moving on over you...". Soleurs answered incorrectly and was eliminated from this challenge. The correct answer was "You didn't think that I'd come back".

KittyCat11231's song was Price Tag - Jessie J and the lyrics were "Why is everybody so serious? Acting so damn mysterious? Got your shades on your eyes, And your heels so high, That you can't even have a good time...". He answered incorrectly and the correct answer was "Everybody look to their left".

Skyfall: All the players were confronted with the Sky Drop at Y9 and they had three tries to drop from the tower and try to survive the drop. Each person landed safely was worth 1,000 diamonds. The three people who made it, resulting it 3,000 diamonds added to the pot were Cortesi, Music3_0, and Soleurs.

Episode 7 - "Minecraft Physics, Why Are You Doing This To Me?" -Cortesi

Farm Games: The players were told to split into two groups, 2 people who want to work, and 4 people who want to play games. Soleurs, Cortesi, computerghost, and jphgolf4321 were the team who wanted to play games, and Music3_0 and Max4344 were the working team. The people who want to play must lead sheep from an animal pin and put them into the correctly colored checkerboard pattern marked about 30 blocks away from the pen. If completed that first, the group would earn 10,000 diamonds. However, the 2 workers had to fill in a field with seeds finish first before the playing team, they would each earn an exemption, and no money is added to the pot. The Working team finished first and Max4344 took the exemption. and Music3_0 had an exemption already, so he gave one back for 1,000 diamonds.

Burn, Burn, Burn: The group had to complete the Burning Building Game at Sandstone Fair and one person must come out with all the items, if passed, 15,000 diamonds was added to the pot, however, all players died, which resulted in no diamonds being added to the pot.

You've Got A Friend In Need: This challenge was basically a question on a quiz, and the person with the most votes got a free exemption. Music3_0 got the exemption and took it.

Bulls Eye: The remaining four players had to choose a target ranging from easy to pro, and try to hit the bulls eye.

Fight For Your Life: The remaining players were put into a Wishington-PVP arena, /pa 3, Urban River, and had to fight to the death for an exemption. Cortesi won the PVP Match and was offered 5,000 diamonds, declined, then was offered 10,000 and declined.

Three Rooms: The three remaining players had to solve a puzzle in thirty minutes or they would fail. The aspects of the puzzle were to escape The Hotel by escaping their own three rooms and escaping the fenced area by communicating what is in their rooms and helping each other. The answers to this puzzle can not be revealed so that if you would like to play it, ask MinecraftYoshi26. The team ended up failing this challenge, losing 40,000 diamonds.

The Long & Winding Roads: The three remaining players are asked personal and revealing questions about each other. One by one, a diamond is hidden in a chest in hidden in the area. The two other players are asked the same questions, and must try to match the answers given by the hidden player. After each response, the two players go either left or right in a fork in the road. If they answer all three questions correctly, they will successfully guide themselves through the village and find the hidden diamonds. If they make just one wrong answer, they will go down the wrong fork in the road and will not find the diamonds. This took place at Arisa. Each correct walk through was worth 10,000 diamonds. The team succeeded at zero of the three people's questions. This ended with them ending with 0 diamonds out of 30,000 possible.

Episode 2: Soleurs purposely put wrong items into the wrong side in Story Time and tried to confuse players in Thanks For The Memories.

Episode 3: Soleurs tried to divert the pigs away from other players and miss the gate in Come Come Piggy Piggy.

Episode 5: Soleurs built a poor representation of the song in You Build What You Sing.

Episode 10: The Mole purposely slowed down in Three Rooms and answered questions wrong in The Long & Winding Roads.

In some episodes, there were hidden clues toward the Mole's Identity.

Episode 5: In You Build What You Sing, the example given was Oklahoma! - Alfred Drake. Soleurs lived in Oklahoma.

Episode 7: In Farm Games, players were told that the workers were plowing, Soleurs means plow.

Episode 8: In Burn, Burn, Burn, MinecraftYoshi26 stated that the game is over 407 days old. 407 was the numbers in Soleurs's old username.

All Episodes: Soleurs was never called up to be checked at the elimination room.