Totem Beach is a bustling city on the shores of Avenir Bay, in Epsilon, Ward 6. It is the largest city in the immediate area, and serves as the main economic hub and general way-point for the far Southwest. Due to its unique climate, accessibility, and low corporate taxes, it is a very popular area for economic activity, and fast becoming a hub for various road, rail, and air infrastructure, due to its prime geographic location between the major hubs of Gamma, and the fast-developing regions of outer Epsilon.

Crimsonf0x (then known as Foxwolf11), had been becoming increasingly unsatisfied with his first town, Gryffin, located on the MRT Valley Line. Gryffin had suffered from poor long-term planning, and because of such was becoming difficult to rank up. Alongside this, Foxwolf had also seen the other grand cities of the MRT, and felt hopeless that he had nothing to build up and compare them to. This reached a breaking point when he kept building up the exterior shells of buildings and just never doing anything with them. Finally, when Foxwolf was building an amphitheater that wasn't undergoing any significant progress, he flew up and left Gryffin, never to build there again.

Originally, Foxwolf flew west, hoping to claim a plot of land on the Savannah line for his metropolis that would be master-planned all the way to Premier, but he soon discovered that there was no good area that had not yet been claimed by another member. Unsatisfied with the selection, and having passed a beautiful bay on his way, he flew to that, and thus Totem Beach was founded.

April 1, 2019 - April 30, 2019
On that same night, Foxwolf was eager and had high motivation to build. The first build in Totem Beach was a section of road that is now the wide boulevard known as Boardwalk. At this time, work on the city was sporadic and slow. Among the first buildings are a condo building overlooking the waterfront, a recreation store, and Foxwolf's house, the Mayoral Mansion.

After many unsuccessful bids for Councillor, Foxwolf decided that he needed a project he could put his name on and could feel pride in. Thus, many of the beach piers were demolished, and a grass waterfront was created. After 3 lengthy hours of terraforming and landscaping, the waterfront was finally complete. Shortly after, Totem Beach was approved for Councillor by Tom_Pairs and hvt2011

Finally, on June 15 of 2019, Totem Beach was promoted to Mayor, by HeavenAngel and godzilltrain.

The climate in Totem Beach is very interesting and unique. In the summer, temperatures can reach as high as 40C due to the surrounding desert to the west. However, the temperature can drop to low temperatures of 15C-20C due to the cold ocean to the east, and the wind from the extensive snow biome across the Estival Sea. In the colder months, the temperature is typically 15-20C during the day, and 5C-15C during the night. Totem Beach is not susceptible to hurricanes and typhoons, as it does not get rainfall often, and the near ocean is cold. However, in the summer, it can get brief, torrential rains when flash floods are to be expected.

Totem Beach highly encourages tourism, and we welcome tourists from everywhere. We have some regulations on tourism, though, and tourists are required to abide by City Rules, the rules of the Democratic Republic of Vulpine, and server-wide MRT rules.


Totem Beach is not really well connected to other cities yet, as it is a small, new town in a developing area, but the Totem Beach City Government is working on ways to improve this. A heliport to Central City will be built, and the town is planned to build south towards  D44  Totem Beach Plaza Station. Also, (assuming the UCar plugin will be re-established) a road will be built to connect Totem Beach to Deadbush, Heampstead, and the Contiguous MRT Highway System. Please bear with us as we work to establish these means. 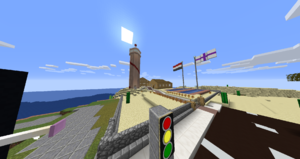 This alley, named after the great writer William Shakespeare's birthplace and childhood home, is a one lane alley, but also has a sidewalk for pedestrians. It has many outside restaurants and franchise, and is the largest cultural hub in Totem Beach. 100 1 Av 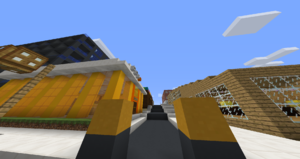 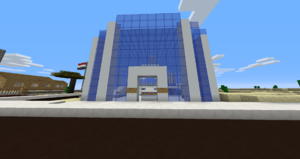 The highest point in Totem Beach, this tower was built to commemorate the alliance between Foxwolf11 and FiorkG. It contains a TV Broadcasting Tower for FOX, an observatory, and a high-end restaurant.

-Also, please be respectful of the fact that some of the buildings/apartments in Totem Beach are private property and do not enter them without adequate permission from the owner of that property. Nope, that didn't exist.

Totem Beach has a thriving transit network. The Totem Streetcar is a historic line bringing downtown to the Desert Line. We have a banned bus network, and an express bus to Deadbush. 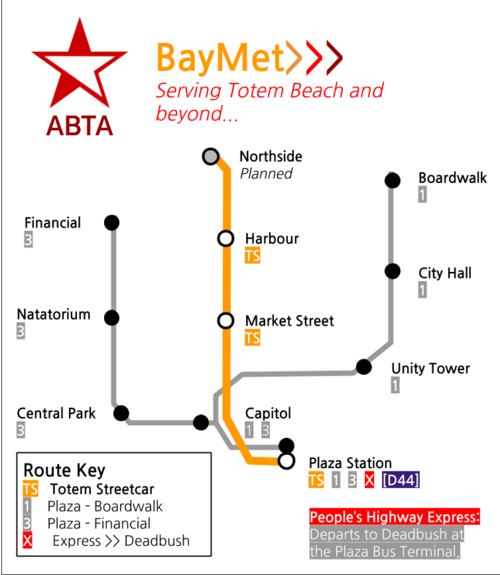