Deadbush, initially known as Deadbush City, is a large metropolis located in the western edge of the Grand Mesa. It was founded on April 6 of 2018 as ManuF_moj's first town, who at the time played on a different account known as MojangChan. Initially a back-water desert town, it has grown to be the cultural, industrial, commercial, and transport center for the entirety of the Grand Mesa, taking the tile from the formerly largest city in the region: Birdhall. The city in itself spans across three biomes, and covers a relatively large footprint: from the hot deserts of Peachtree City, to the cold plateau of the city center, and to the rolling hills of Johnston. It is also known as the city with the most airports, with a total of five (listed in the infobox of the wikipage).

The city was founded on the 6th of April, 2018, five days after MF moj was promoted to Member. It was founded on a valley between two plateaus, one of which sat Heampstead, at that time one of the largest settlements in the Grand Mesa. Seeing the close proximity of the town, the mayor at that time, MikeRoma established a buffer zone between it and the newly-founded town. This buffer zone, for the next two years, would serve as the northern border of Deadbush, until Heampstead's eventual abandonment out of inactivity. A monument located right where the buffer zone stood, serves as its memorabilia.

At this time, Deadbush's expansion rate was relatively slow, with only a building or two being constructed every couple of days. One day however, ManuF_moj found an abandoned town while venturing about the Zuid Plateau. After a few inquiries, he discovered that ModernArt found the place, and thus, asked him if he could have it. Affirmative, that answer was, and thus, Southfields was annexed into Deadbush.

With a town now annexed into the city proper. It was now time to connect these two places together. A small road from the existing B60 to Southfields was initially built, then following the construction of a series of buildings lining through its right side. Notable buildings built during this time include the Union Building, the headquarters of the city council, the Pylon Building, the first skyscraper in Deadbush. In fact, at this time, and Deadbush Centro Station, the first ever railway station built in Deadbush. A quick trivia: the phenomenon known as Mojangitis was born at this time, after ManuF_moj was dragged into WorldEdit school by Just Robinho.

A second wave of rapid urbanization happened a few weeks later, when Deadbush applied for [Senator]. Now harnessing what was to be known as Mojangitis, swaths of furnished buildings were built from the ground up. From skyscrapers to housing, the expansion rate increased immensely, eventually leading to the clear promotion of Deadbush to the aforementioned rank. This rapid pace of expansion would then continue until Deadbush's rise to Grand Mesa supremacy with the achievement of the  [Premier]  rank.

The city now stands today as not just the largest city in the Grand Mesa, but also one the of largest cities in the server. With its cohesive city center and the variety of its sprawling suburbs, the city sits as a great metropolis, and a superhub for many things MRT, due to its vast size and cultural significance.

Deadbush is located at the western end of the Grand Mesa. Most of the city is located on the Zuid Plateau, with some parts of the city spreading into the lowlands. The Valletta district is located along the coast, in the desert.

The climate of Deadbush is varied, from a desert climate with cool winters on the Zuid Plateau to the hot tropical desert climate of Valletta. The city generally has a desert climate, with little precipitation year round, most of which comes from thunderstorms which generate over the warm southern waters. During the winter, cold fronts occasionally make their way south across West Lake, and bring cold snaps, occasionally bringing the temperature on the Zuid Plateau down to below freezing. During the summer, temperatures can reach up to 50c (122F).

Pioneer District is the first district to be created in Deadbush, as well as the city's administrative seat. It is located in the foothills of the Nord Plateau (where the IntraRail track is located). It is home to the headquarters of several businesses based in the town such as Stone Bank1 and Chan Industrial. Many foreign franchises, both along River Valley Avenue and in the Arcadia Shopping Mall, are located here. Notable ones include Space's Ice Cream Stand and Richville Metropolitan Bank. The embassy of the United Dominions of Megaton, a town in the InfiniteHeights server, is also located here.

Valley District is a very rugged district created along with Middelhoog and Southfields districts through the Annexation Act of April 22. It is located between the Nord Plateau and the Zuid Plateau (where Middelhoog and Southfields are located). It is composed of two distinct areas, West Valley (New Valley) and East Valley (Old Valley) as a result of the annexation of Pond Suburb of Titsensaki (POST) into Deadbush. East Valley is composed of low-income housing under the Union Avenue viaduct as well as high-rise residential towers located on Nelson Hill. West Valley is composed of a cluster three-story houses, a small shopping strip, POST Central, and an abandoned military base under the plateau. 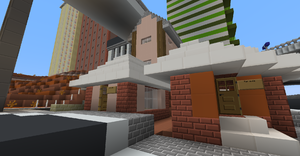 Middelhoog is the legislative seat of Deadbush. Like Valley, it was created through the Annexation Act of April 22. It is located in the Zuid Plateau, along the Chan River. It is home to the Deadbush Grandstand and the Union Building, both are located in Centro Square. It is also home to the Deadbush Central Business District, the financial center of the city, which serves as the headquarters of many big companies based in the city such as QMEU Telecom and Stone Bank. It is also home to the Deadbush Centro Station, the main railway terminal of the city, which is served by Manukau Transport and the P&D Railway. 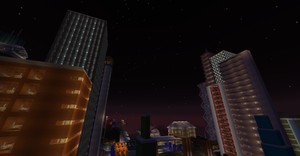 Southfields is a town-turned-district formerly owned by ModernArt ceded to MojangChan through the Annexation Act of April 22. It serves as the judicial seat of Deadbush. The district is unique as its road design and buildings are different compared to the rest of Deadbush. It used to have a left-hand side driving policy but switched to integrate with the other districts. It is composed of two areas, Southfields Proper, all buildings that were part of the original Southfields, and Oakridge, a residential area that extends until the southern end of the Zuid Plateau. 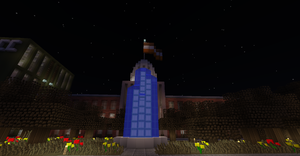 New Manila is a district west of Middelhoog. It is home to the first municipal agencies of the city namely the Municipal Housing Agency, the Municipal Infrastructure Agency, and the Municipal Employment Agency, as well as the Place des Quartiers, the headquarters of the Council of Districts. It is also home to New Intramuros, a neighborhood inspired by the architecture found in a Spanish pueblo. Within this pueblo houses the University of Deadbush, the flagship university of the city, Deadbush Palengke, a flea market that sells very-low-priced goods, and the first Volkerlager, an urban farm and food storage that anyone can use. Also in the district is Deadbush Chinatown, the first Chinatown in the MRT Server. 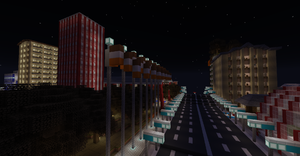 Asulton is a district occupying the southwest portion of the city. It is home to the Deadbush I.T. park, an extension of the Deadbush Central Business District which houses the headquarters of companies like Damasony Electronics and Le Tran Oils. It is also home to the Freeman's Ward, a shanty town confined to a single city block, and Berlin Residences, a neighborhood composed of German-style houses. Municipal agencies located here include the Municipal Transport Agency and the Municipal Intelligence Agency. 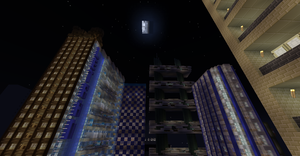 Oaksburg is a district located on the northern side of the Zuid Plateau. It is home to the headquarters of the P&D Railway and the Municipal Foreign Affairs Agency. It serves as the starting line of the NASKart track, Deadbush Heights. Notable franchises here include niccoffee, Quill & Ink, Inc., and Foxfoe Chemical Factory. Oaksburg also contains the Jefferson Sports Complex, which houses the Jefferson Spleef Arena, Deadbush Flats Golf Course, Toshinori Yagi Sumotori Arena, and the Bowspammers' Archery Range. Recently, a business district has been built in eastern Oaksburg which contains the new tallest building, One Farringdon Center. 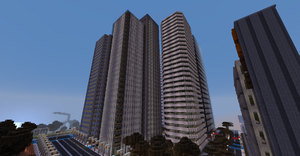 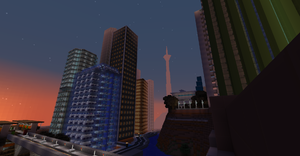 Cirque is a district located in the cirque that is surrounded by the Zuid Plateau and the Midrand Hills. It is home to the most of the embassies in this city. It is home to Midrand Homes, the first private residential subdivision in the city, which houses the Deadbush International School, one of the most prestigious schools in the southwest. It is home to Queensland Lake, a recreational fishing lake that let's you cook the fish you caught in the many furnaces and grillers they offer. 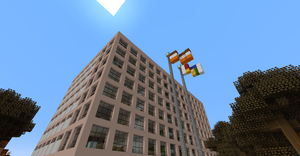 Burolsburg is a high rise residential district located in southwestern Deadbush. It houses the Darlington Center, the headquarters of the Council of Districts, the Pioneer Stadium, the Deadbush Obstacle Course, and West Point Park. It is the most wooded district, given its large amount of oak trees. Notable franchises here include the Metrowater and the George Bush American Diner. 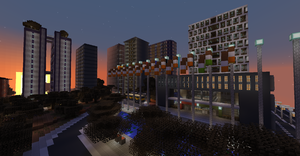 Darlington Center with numerous high rise apartments in the background

Howard is a small agrarian district located west of Pioneer. It is built on reclaimed land to cope with the hilly terrain. It is the location of Borderton, a failed housing project that got turned into a shanty. Notable franchises here include the Howard Library, the first library to support item enchantment. 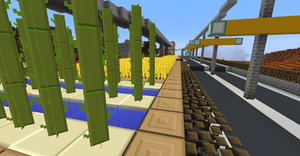 Wheat and sugar canes farms with DEM Line 3 track above.

Nord is a district located on the southern tip of the Nord Plateau. It is the smallest district in terms of size. Many local franchises have branches located here. 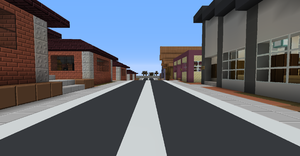 For the former town, see Borderville

Borderville is a district located in the southeast of Deadbush, in the rugged Lake Hills. It was formerly a town owned by Foxfoe that was given to MojangChan and turned into a district of Deadbush through the Annexation Act of January 6. It is the only district in Deadbush to drive on the left side on the road. 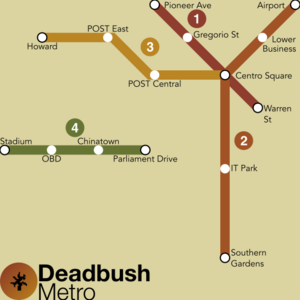 The following cities/towns have a Deadbush Embassy:

The following cities/towns have an embassy in Deadbush