Whiteley is a town on the MRT built by AP_Red. It is situated north-west of Zaquar, near ZS22, in ward 6 of the server. It is currently at the Senator rank. The town was started after AP was bored of building in Lakeview and wanted a more interesting project inspired by typical British seaside towns. 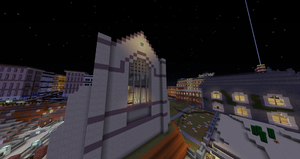 Whiteley was originally founded around 1820 as a coastal fishing village. The town was officially named in memory of the famed explorer Sir David White who discovered a Tyrannosaurus Rex fossil in what became North Cliff. He tragically died in 1816 having fallen down the cliff. The first markets of the town were held in the location of Seaview Plaza. To this day two of the bones form an arch on North Cliff.

By 1834 the need for a canal linking the western and eastern lakes had become apparent so the Whiteley canal dig project was started to provide the crucial water link. This brought much publicity to the town but unfortunately the canal was never finished past the western border. To this day the swing bridge that was built to account for the canal acts as a central landmark between the north and south of Whiteley. 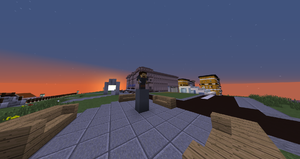 The Statue of T.H. Scouse at Northcliffe

In the late 1870s the poet T. H. Scouse began to write about the views from Whiteley across the bay of Loch Lyman, particularly toward the settlement of Zaquar. This brought a boom to the town with new homes being constructed on the north cliff itself and on the beaches south of the canal. Around this time the northern town of Vegeta was suffering from pollution in its river, pushing fishing demand south to Whiteley. Because of this the Lyman Bay was designated a preserved fishing spot with heavy pollution regulation. T.H. Scouse travelled to Vegeta in July 1899 to advise the council to follow Whiteley's lead. Unfortunately he never arrived and was declared lost at sea in February 1900.

By 1960 the town was appearing dilapidated with many businesses moving to the newly founded town of Central City. The newly constructed Central City Commuter Rail Network (CCCRN Later renamed MRT) was never planned to serve the town of Whiteley so the town began to fall by the wayside. Development of an urban area away from the beachfront began to encourage business back into the town with the regional headquarters of Waffle House being constructed. The city hall was reconstructed and moved from Seaview Plaza to what later became Turing Square.

The Metro Network and Highways - 1980s

By the 1980s it was clear that transportation toward and within Whiteley was becoming inadequate. Residents had become tired of riding on vintage buses along neglected roadways. Because of this the central aim of a campaign in the 1960s was to construct a 20th century transit network fit for a 20th century city. Part of this was a complete repaving of central streets with Main St being widened and becoming Quins Avenue while Norwich Boulevard had bus lanes painted on to encourage bus usage. However the most significant part of this project was a metropolitan subway network. Constructed with the neighbouring town of Schillerton, the metro brought an economic boom once again to the town with Southwold University being constructed to the west.

Along the streets of Quins Avenue and Harbour Lane are many shops where you can find anything from beach towels to the latest catphone to the best Fish and Chips the MRT has to offer. 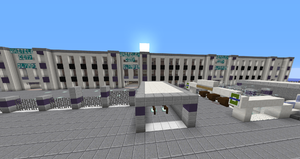 Whiteley's primary sports complex is along Olympia Boulevard and was specially constructed for the IV TacoBurritoAThon in October 2016. This consists of a Sumotori Arena, a swimming pool, and the primary football stadium. This area is served by Olympia station on the STC C Line.

Since 1980 every September 19th has officially been celebrated as Talk Like a Pirate day in Whiteley. Visitors are encouraged to speak like a stereotypical West-Country pirate and wear traditional pirate outfits. At midday a parade makes its way from Turing Square and along Quins Avenue to the Hinkley Area. Mock-up pirate ship floats and displays of swordsmanship usually feature.

First officially organised in 2010, the Southwold Pride celebrates all in LGBTQ+ diversity, including advances made in civil rights worldwide. Usually beginning around midday Saturday, the parade processes from the waterfront, along Quins Avenue and finishing at Quins Junction. Stage shows and demonstrations also happen throughout Whiteley, including a main stage at Adams Park (STC Metro B).

Whiteley is at the southern end of the A51 with the A50 directly to the north.
The city is served by an extensive metro system.

The central transit terminal for the city is Turing Square station, served by RaiLinQ, BluRail, Great Central and Fred Rail.