Vegeta, formerly Vegetus, is a town created by mine_man_ in late 2015 after wanting a fresh start and a break from Elecna Bay. From this, he flew to a location where he wanted to build a town for awhile in the middle of the Mega Taiga, by a river.

The idea of Vegeta was to create an organic city layout with a consistent pattern. Alongside this, mine_man_ planned to have lots of parks, shops and small alleys to add a cozy feel to the town. Restricted franchise laws meant that buildings could keep a consistent pattern but have decorated storefronts and make the city feel more alive than Elecna Bay was.

Unlike Elecna Bay, Vegeta was not going to have 3 different metro systems and instead was going to incorporate a warp-tram network throughout the city alongside many bus routes. The aim was to create an aesthetically pleasing bus and tram system that didn't have stops every 30 meters and instead made efficient travel across the city.

Many cities on the server have large, grid-like road systems, however, mine_man_ wanted to create a road system which was built around the terrain as well as getting people from A to B. The road system included some main roads which would extend from the front of Vegeta Junction Train Station. Connecting these main corridors would be smaller gravel roads which would normally be one way to help disperse traffic away from busy areas. 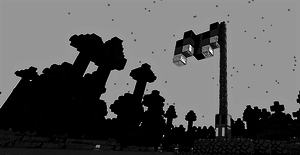 The first drawing of Vegeta with the flag in the background.

Vegeta was originally started as a small fishing village in the mid 18th Century due to its pristine waters and large quantities of fish. The area was discovered by seven founders. The seven founders brought their families to the area and began to set up a couple of fishing docks and markets. The catches they got were twice as big and triple the quality they expected. Areas like Hillside Green and Harlton Square became big fishing markets, known around the world for the high value of produce. At around this time, the town doubled in size, with more people than ever trying to get their hands on this gold mine of a location they had found. 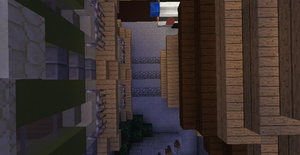 A picture of Vegeta today showing the divide between old and new Vegetus.

Due to all this trade in and out the town, Vegeta had quadrupled in size in just 20 years. However, the vital services could not keep up with the demands of so many people. The river became over fished, making many species of fish extinct by the 19th century. The remaining fish became smaller and worse quality than 50 years ago. The waters also became heavily polluted with all the waste from the huge population being dumped in the river, killing off the fish and clean drinking water. All of this caused a great collapse in the economy, with the fishing industry dying off and disease running rampant. Anyone who could still afford to live in Vegeta moved either uphill or away from the river, leaving the line between old and new Vegeta you see today.

As the 19th century continued, introduction of the railways into Vegeta brought new opportunities to the city. Many rich families visited the town due to the new connections and helped bring in money to the town. The tourism trade in the city steadily grew, providing enough money for new services like a canal to be built in the south connecting the centre of the town to the river. However mainly this was used to divert sewage downstream. Overtime, the city began to grow again, more steadily, with the fishing industry now steadily re-growing. Eventually, Vegeta Junction was able to be upgraded into a huge railway hub with many services now terminating there. 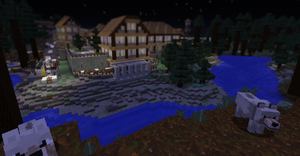 A family of wolves by the edge of the national park.

As the 20th century approached, the town began to grow much faster than before. Many residents complained that the nature and fresh air they lived in the town for was being ruined. Many groups like Vegeta Green Belt and Taiga First were founded, protesting to protect certain areas from development. These groups mainly effected the western side of the river, protesting to leave it untouched after seeing huge expansion plans from the government. Today, the western bank on the river now remains a national park, with wildlife untouched and leaves a stretch of beauty to that side of the river. 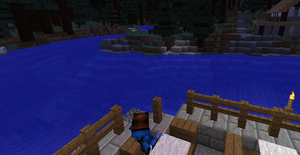 A tourist sitting by the river drinking the now-clean water fresh from it.

The biggest recent change to the city was the introduction of the Vegeta Fishing ban in the 1970's. Many people were realizing Vegetus had a massive potential for tourism and the fishing industry was moving away from small towns like Vegeta but instead large seaside cities like Elecna Bay and Palatium. After many years of campaigning, the government decided to drop the Fishing industry and protect the cleanliness of the river. Very shortly, fish returned to the river, due to its now low pollution and low fishing. It became so clean in fact, many houses by the river were able to just have water pumped into their homes. 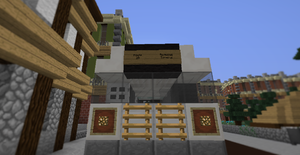 The new buses implemented to the city, made by AutoDesignZ.

Now that the river was protected, many tourists spewed into the town due to its high value for nature. Many new attractions were made, like the spa by hilltop green, caving sites and beautiful trails across the town. The growing amount of people all year around made the government to take public transport into consideration, deciding to build a tram line by the river and bus routes to and from Vegeta Junction. Due to the success of these, more bus lines were extended and more trams were introduced. Old Vegeta became protected to allow the old building style to be retained due to tourists loving the deep history behind the town.

Vegeta is known for its tourism due to the large amount of shops as well as the beautiful views of the taiga around the city. There are lots of parks, places to eat, places to relax and have fun. 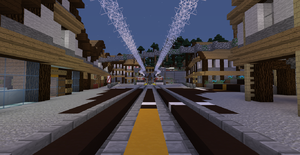 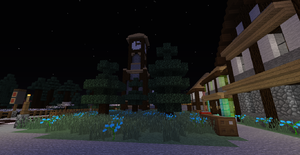 Hillside Green, with the market clock tower in the background.

Within Vegetus, there are many cornershops, high streets and hidden shops to supply all the way from gems to coffee, clothes to flowers and slushies to music. All this variation in shops has allowed for a huge growth of tourism in the city. With all of this shopping, it can be hard to keep track where everything is, so here is a guide to help you find the shops you need in Vegeta:

With all of this activity going on in this tourist hamlet, lots of restaurants, coffee shops and fast food places have opened up in the town. Some of which are Kalmar Fried Chicken, Derek Jeter's Taco Hole and RapidCoffee. If ever in need of refreshments and food in Vegetus, we made a guide so you will never have to get hungry or thirsty again.

Vegeta is well known for the wide verity of events it is able to cope with. From pride parades held by MRTGAMA to spleef tournaments, the city of Vegeta has it all.

Vegeta was home to the first pride parade hosted by MRTGAMA. Floats, people and festivities were spread throughout the areas of Hillside Green and Orion Square. It was made after the tragedy which were the Orlando shootings on June 12th. The day after, the Parade was made to show recovery of the LGBT+ community. Many people flocked to Vegeta to claim floats to decorate to make the parade into what it is today. Due to the popularity, a $100 pride was offered to the best float. It was a great step for the city which is now a quarterly event on the server.
The event finished on July 8th where Narnia17 was announced to be the winner of the float contest and was given $100 for his efforts. After the event finished the next parade was announced to be in Nippia continuing the server-wide tradition.

Vegeta is connected with a large network of trams, buses and trains throughout the city, operated by Vegeta Express Transit. Vegeta Junction is the main hub for all of this transit, with all of the buses terminating outside and many other tram and train routes passing through. 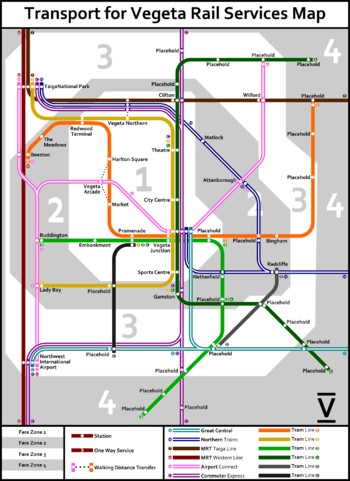 Vegeta is well known for its expansive light and commuter rail services, which span the city area. Most of these services pass through Vegeta Junction, the central hub in the network. In total, there are 4 Light rail lines, 2 Vegeta-owned commuter services, 2 third party railways and 2 planned MRT lines. Vegeta is also one of the few cities to have incorporated fare zones into it's transportation network, splitting Vegeta and the nearby areas into 4 different zones for charging passengers on any of the railways.