DOYKEA is a franchise on the MRT Server founded by Ryumitch. Main competitors of G-Tech, DOYKEA are most famously known for their flat packed furniture and buildings, as well as their current venture into arsenal equipment and meatballs.

DOYKEA was officially founded during the opening night of Gamma, when Ryumitch founded the headquarters after purchasing the legal rights to the company. Although the company was officially founded during the Gamma opening, DOYKEA has been a constant threat and competitor to G-Tech, often being referenced as enemies by both Thanefein and Ryumitch.

Xandar Doykea, An example of a MegaStore 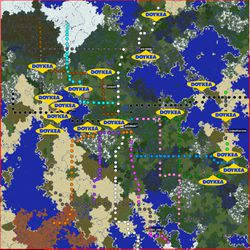 These are the current available stores around the world:

The G-Tech HQ is a flat packed tower created by Doykea, which was ready to construct in 127,506 simple steps.

Best selling furniture ever created was the Chaise longue, "Moomar" from the "Skan-Cö Range".

"Generisk Logi", including the "Deluxe" variation, is currently available for purchase in the town of Vekta. Designed, produced, and manufactured by DOYKEA, the accommodation is quick, easy and cheap to build, making it extremely competitive when comparing to competing accommodation. The design is kept to a modern style, and is available in a variety of colours.