Wazamawazi is a large city in the north-west of the Gamma area. It became well known for hosting the Fifth Eagle Awards and MRTvision Screenshot Contest 3 in it's multiple major theatres, and for being the home of RaiLinQ. It has also been featured multiple times in The Amazing Race.

Wazamawazi has a large amount of smaller districts, and a district map will be posted soon.

A very small cramped district of small row housing pushed between Wazumi town and Zwanenburgt and the highway, not very popular and the only interesting thing in it is a library.

A mid sized suburban area on the edge of the mountain between C96 and C97. No important buildings can be found here.<BRM> 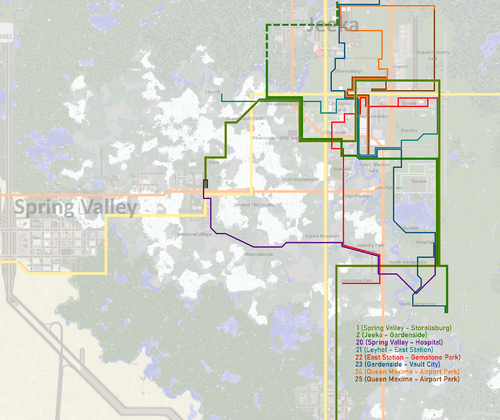 2  TramLinQ Tram 2 runs from the main station via Shawazu to the Queen Maxima RaiLinQ hub and then continues into Gardenside district.

18  BusLinQ Bus 18 rides a shuttle service between tramstop City Center and Queen Maxima so people traveling from the north to Queen Maxima can save .25 cents by not traveling via the Main Station.