Espil Ecilidae Airport is the primary airport of the city of Espil, and is the largest and busiest airport in the Estify Region. 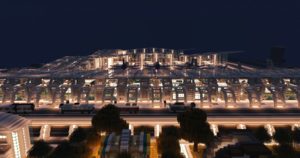 It is located on the Waverly and Espil border near Ecilidae, and features two passenger terminals. It was first opened in 2016.

Once Espil had reached the Governor rank, government focus was heavily based on providing new connections to the city. As a result, an airport was highly desired, as an airline boom was occurring during this time. In August 2016, the plans were announced to the public, and bidding began for airlines to propose destinations. There was more interest than expected, and so the airport plans had to be expanded in order to meet most of the demand. 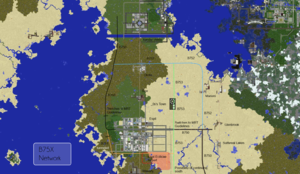 One of the original construction plans.

The location selected was in southern Ecilidae (a new district at the time), and bordered Waverly. It was hoped that the new B751 and B753 highways that pass through the area would provide better connectivity for the airport. It was initially planned to jut slightly into Waverly, but with increased demand, the scale had to be increased, going further into the Waverly side. The airport departures terminal was eventually completed, but construction progress of the lower departures terminal stalled as a result of the scale of the terminal.

Since construction, many transport connections have been added to the area.

The airport has two terminals, one for larger planes and the other for smaller planes. As Espil has no national carrier airlines, all flights from the airport are run by third-party airlines. 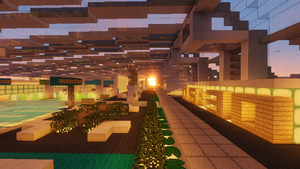 This terminal is located on the top floor of the airport, and serves 20 gates. All planes are medium, or large sized. This was the originally intended to be the only terminal at the airport.

There are multiple bus shuttles that are located on the upper departure terminal entrance. Fares may be required, check with your shuttle operator.

The airport is a hub of connections for the Ecilidae area.