Xilia is a city-state located at  T5 ,  T6  and  A5  on the New World. Its mayor is camelfantasy and its deputy mayor and founder is Yellowitcher. Xilia is a modern-themed city which has a lot of office buildings and green spaces. The mayor aims to make Xilia the greenest city of the MRT Server! The city is a member of the NWAG, The Federation, the United Cities and the New Delian League.

Xilia is located in two biomes: a taiga and an oak forest. There are several lakes and hills in the area. Luxemburg River and Taroko river go across in the north and the south of the city. Some areas such as the industrial district have be highly terraformed during their construction.

Xilia was founded on April, 18 2015 by Yellowitcher at  T5  Xilia-Republique near a small natural lake after he saw this area in Frumple's Taiga Line timelapse. Yellowitcher at once started building the city. The lake was removed and changed into the Republic Square. He also started the first building (the city hall) which was completed a day later. After that, the city has known a slower growth. Once the city hall was completed, Yellowitcher started developping the roads around the Republic Square. Then, the mayor decided to build the red and blue towers next to the A8. He also started building the Xilian Library. During the following months many other buildings such as the bank, the hotel or the melon market were built. Xilia got its first franchises and the metro blue line was opened between two stations. Yellowitcher also developped the road network and he built the first park (which is called Xilia park). However, the mayor was bored with the city and its growth stopped for a while. After Summer 2015 break, Yellowitcher came back to the server and he started working on Xilia again. The mayor got [Trustee] during the summer and Xilia became big enough for [Councillor]. The city was recognized as a town in September 2015 by lalaboy and mikefishr.

As soon as Xilia got councillor, Yellowitcher decided to build roads to connect Xilia to its closest neightbours. The part of the

between Xilia and Cornus was built (it was rebuilt later because because of the MRT Road Standards) The A8 exit was opened and  T6  Xilia - Nation was claimed. A new era began for the city. Yellowitcher added new buildings to the city: the mayoral tower (where all city staff's offices are), a pharmacy,Witcher Corp tower... He also continued building the metro. Terraforming began in the area where HSR Xilia was later built. tarheelscouse was hired as deputy-mayor. In October 2015, several players visited Xilia and found it was ready for [Mayor]. The mayor asked for promotion and was promoted by CortesiRaccoon and MinecraftYoshi26.

As Xilia was mayor, Yellowitcher asked RLcrafters , who is the CEO of RegionalConnect, to add a station on the line which goes near Xilia. He accepted: HSR Xilia was born. Construction started on 10/11/2015. The station was planned to be a high-speed train station because of RL's HS3 project between Xilia and Kenthurst.

In October, the city joined League of Cities as an observer state. The olympic swimming pool, the courthouse, the farming tower and the 11/13 attacks memorial were added to the city. Yellowitcher started developping the Residential District and he asked other cities to build ambassies. Xilia University construction began. A nice hill near the city was chosen to become a greek-themed district. Xilia got more franchises and the Great Xilian Cathedral of Tacoism was started as a future landmark. Empty buildings were mostly furnished. A change happened in the city's staff: tarheelscouse became head councillor and camelfantasy was hired as the new deputy. Xilia was ready for [Senator]. The city was promoted on February, 14 2015 (Batch #5).

Once Xilia got senator, Yellowitcher and camelfantasy started building the first maglev line of the MRT Server between HSR Xilia and Formosa West. Xilia's growth continued: the city started expending to the north. The Nation Square was completed, some old buildings in the Central District were demolished or sold to other cities then rebuilt. HanSangYoon built a Sonamu and he bought a tower for one of his companies (he since gave it away when he became inactive). Nation Square was finally completed then a pagoda and new buildings were added and a spleef arena was built. In August 2016 Xilia hosted the first edition of the New MRT Spleef Tournament. Yellowitcher, Ezzocraft and Aliksong tried to form an SMP but it was rejected at August GSM. In December 2016 Xilia and the other cities of the New Delian League joined the United Cities. While Epsilon opened, Xilia went through a quick time of inactivity. In the aim to be promoted to [Governor], Yellowitcher decided to start a new developpement plan including the achievement of the residential district. A monument was inaugurated on April 18, 2017 for the two year aniversary of the town. A few days later, the city was promoted to [Governor]! 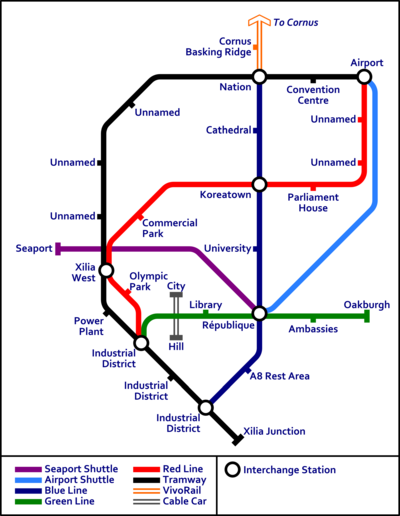 Xilia has three underground rapid transit lines (Blue, Red and Green) which are still under construction, a planned tram line, two high-speed shuttles powered by ChimeRail and one cable car. The city does't have any local buses but it has bus lanes in some streets for intercity buses.

Xilia is divided into five districts (Northern, Southern, Central, Eastern and Western) which are planned or still in developpement.

The Central District is the oldest district of Xilia. It's a business area with a lot of high buildings such as the Governement Tower or Xilia's University or the Great Xilian Library. The City Hall is located next to Republic Square which is the biggest square of this district. The city hall is also located in this area. This district is served by five metro stations: HSR Xilia, Library, Xilia-République, University and Embassies. The embassies street is the diplomatic center of Xilia.

The governement of Xilia supports green spaces and tree planting. Its mayor is one of the main MRT Green Party's members. Many parks have been built in the city so that every citizens are able to enjoy nature without going out of the city. These eco-friendly projects also fight global warming and improve air quality.