Savacaci (pronounced sa-va-ka-si) is a town in XW23 founded by SoaPuffball. It has a massive focus on shopping. 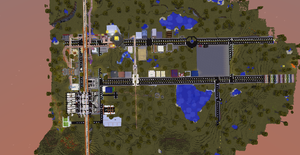 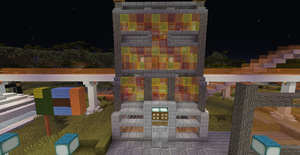 The second iteration of the Savacaci City Hall.

The City Hall is Savacaci's government office. It has five floors, the first being the lobby, the second being an award room for rankups, also containing a crafting table and anvil for guests, an ender chest for members and a jukebox. The third floor was the floor where the Savacaci Metro passed through, but when the Central Line was overhauled, the floor became completely useless. The fourth floor is the office of all town officials, and the fifth is the rooftop. It was once overhauled, having a different and simple town hall design made mostly out of acacia wood, but then changed to the current design with an andesite floor, stained glass windows, a more grayish look, and stone slab and acacia log pillars.

The City Park is a small playground for the children to play in while the parents look on from a bench in the edge of the park.

Fort Savanna is an small fort used in medieval times, that was later abandoned. It was later heavily destroyed, with ruins and a few eternal fires marking the place. It also has a heavily damaged watchtower, and five pillars with writings scratched off and faded through time.

The Blue Ravine is a ravine filled with ice and water. A cave entrance is also sealed by the ice in the cave. It will also become a national park sometime soon, with bridges to cross the ravine, and an overall more pleasing look.

The SWRC is the environment protecting team in Savacaci. It protects llamas, horses and plants trees and plants around their area and the whole of Savacaci.

The Savacaci Underground Mall, located in Downtown Road, is exactly what it says on the in: an underground mall. It has 9x9 plots for people to make shops in.

The Observation Tower is a tall watchtower in Shopping Road that takes people from y=64 all the way to y=108. Being a very tall observation tower, it also is the tallest building in Savacaci.

How to Get To

Warping to the west terminus of Expo Line and riding the MRT from  XW29  Foobar to  XW23  Savacaci is the quickest way to get to Savacaci. A connnection using BluRail 5 Line, connecting to major cities Ilirea, Espil and Kolpino, as well as a standalone RaiLinQ station, is also planned. A road connection from Central City via Ilirea is possible using  A7  and then  A78 .

Savacaci has many businesses thanks to people who contributed to them. SoaPuffball also gives thanks to whoever set up shop in Savacaci.

Before building, tell SoaPuffball or Seastep the plot size you need. However, you cannot have a plot bigger than 20x20 (except for massive buildings such as Sonamu). We will then give you a plot to build in. A plot is a piece of land marked by stone brick, snow or any block. A claimed plot has a sign in it telling who has the plot. From there, you can build in the plot, however you cannot build outside the plot (except for overhangs).

If you want to build a rail line to Savacaci (as well as BluRail and RaiLinQ who already had plans to connect to Savacaci), please DM SoaPuffball through Discord.

Savacaci is planned to have two bus terminals from the North and the South, as well as another in the center near the MRT station. As of now, the South Bus Terminal is under planning, and the north is under construction. The central bus terminal is reserved for SavaBuses from both bus terminals.