Scarborough is a Governor town owned by sesese9 located on the MRT Plains Line.

Originally founded by Narnia17, Scarborough was set on humble beginnings. The first building was built by Narnia and the roads were laid. However, Narnia lost inspiration and soon forgot about Scarborough. Later, sesese9 was looking to start a second town on the MRT Valley Line. To his disadvantage, almost every one that he saw was claimed. Then, Narnia asked sesese9 if he wanted an old claim that he had at V19. sesese9 rode the MRT there and found that the station was perfect. It was a transfer station for the MRT Plains Line which he considered a plus. In addition, roads were already built! So, sesese9 continued the roads further and built a Rent-A-Car for fresh travelers from the MRT. The area has slowly grown bigger over time. Now encompassing 3 MRT Plains Line station, Scarborough has blossomed from a tiny settlement to a booming city. Considerably bigger than its sister city, West Calbar, Scarborough is the culmination of lessons learned for sesese9 over time.

Centered around  P20  Scarborough - New Kent, the station came under Scarborough's control shortly after the approval for the B431. Since the original owner was inactive and Downtown was slowly growing in the general direction, sesese9 annexed the area for Scarborough. New Kent is mainly residential with a few businesses on bigger roads. Some features of New Kent include streetlights and cul-de-sac neighborhoods of houses.

Originally the town of Denzil,  P22  Scarborough - East Calbar was integrated into Scarborough as the town as slowly expanded eastward. This district is home of the TTC Tram Line Station to Thunderbird.

Considered by many, the skyrise district of Scarborough. Many builds here are looming skyscrapers that pierce the skies. 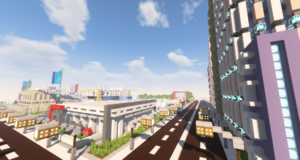 Originally named after the development area by MojangChan, this district is north of Scarborough Air Base and north of the A4. This area features military housing for commanding generals, admirals, and other esteemed officers. Streets are named after decorated US military officers.

Styled after it's inspiration from Pokemon, this district is primarily built by BossOfGames. At first, it was a city itself but was later integrated into Scarborough proper while Boss retains his building rights and does the major planning for the area.

Originally built by frankbros429, this peaceful district was a separate town at  P19  Scarborough - Beaufort until February 2020 when Scarborough annexed the town as a new district.

Headquarted in the Scarborough Court House, the Judicial Courts of Scarborough are headed by the Chief Justice.

In charge of the main infrastructure of Scarborough, the Transportation Department is tasked with upkeep of Scarborough's roads, rail lines, and the metro, SRT.

Unlike West Calbar, Scarborough will have some major highways throughout the town to help with transit. One of the highways is

which connects Scarborough to the

while passing through other towns such as Beaufort.

Beginning in August 2018 and ending in June 2019, Scarborough underwent a huge revamp known under the name Project Spice. Many of these revamps would help Scarborough with it's goal of attaining Governor. Some of the goals are described below in order of priority: