R/place (stylized as r/place) is a community build that was held during the January GSM on January 12, 2020 organized by MinecraftYoshi26. Starting when the GSM began, members were allowed to build on a flat, blank canvas at one y-level. 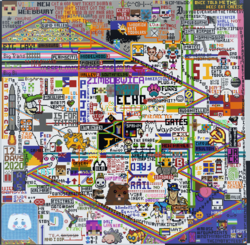 An in-game screenshot of r/place.

The event was held on the Map World in the southeast corner, accessible by a warp from Central Park. The event took nine squares on the Map World, making the canvas 384 blocks by 384 blocks. It was open for building from 11 a.m. PST until the daily restart at 8:55 p.m. PST. During the event, various renders were periodically made to keep updating the image on dynmap.

North of r/place was the podium for Frumple for the GSM and a physical three-by-three map for a live, overhead view.

It is based on the event of the same name that occurred on Reddit in April 2017.

On December 25, 2020, Frumple organized r/place2, a community event with the same premise that lasted 10 days and had a larger 25-square canvas.

The following is a list of flags in r/place:

The following is a list of MRT players mentioned or had their likeness built in r/place:

The following is a non-comprehensive list of all other references in r/place: