From Minecart Rapid Transit Wiki
New World MRT System redirects here. Please go back to the page that linked you here and correct the link.
Jump to navigation Jump to search

MRT v5 was in development in the staff world before the introduction of the New World. 11 initial lines were built by the MRT Staff as part of the Gamma server update over the course of 2 to 3 months.

The main hub of the New World MRT System is Central City which also houses terminus warps for all of the lines.

Extensions for existing lines are planned while 2 more lines will be added to the system in the future.

The line was built by _frozen. The line is slated for future extensions.

The Arrowhead Bridge at Jeeka

The Taiga Line connects Central City to the western half of the Northern Line, passing through the Plains and Mega Taiga Large Biomes in Ward 8. Cities along the line include Spruce Neck, Xilia, Cornus, Laclede, Kessler, Wazamawazi, Vegeta, and Willow.

The line was built by lalaboy. The line was then extended with 10 additional stations to the inital 40. The line is currently being extended again into the Ice Plains Large Biome in Ward 9.

The Plains Line links Central City to the Plains Large Biome at Ward 4 in southwest Gamma and the southern half of the Eastern Line, terminating at the Jungle Line in Hannibal. Cities along the line include Covina, St. Roux, Lakeview and Pearl Coast.

Starting in Central City, the Valley Line runs southeast, linking inner Wards 3 and 4 and terminating at the Southern Line in Aeolia. Cities along the line include Siletz, Scarborough, Fort Yaxier and the terminus, Aeolia.

The line was built by BaronThamesBank and Monsieur_Keks with assistance from Music3_0. The line was extended to the Southern border in January 2019.

The Forest Line commences at  FX  Central City—NE Station, passes through  F1  Central City—SE Station and terminates at  F41  at the Jungle Line. Cities along the line include Dabecco, San Reinoldi, Thunderbird, Freedon and Marblegate.

The Island Line commences at  I1  Central City—SE Station and terminates at  I42  Foobar at the Southern Line. Cities along the line include Elecna Bay and Fort Yaxier.

The line was built by yeamanator132 and hawksfan1010. The line is slated for future extensions.

The Expo Line at Kenthurst.

Zaquar, a city on the Zephyr Line.

The line was built by cal76. The line was then extended by Music3_0 with 13 additional stations to the initial 18 that comprise the southern portion and then the ZSX2 was completed in April 2019 by sesese9.

The Hauban Bridge at Hummingbird Islands.

The Circle Line runs in a rough circle around the New World through every ward and is the only MRT line without termini. The duration to travel along the line's 119 stations is approximately 2 hours. Cities along the line include BirchView, Hummingbird Islands, Mason City, North Haven, Achowalogen Takachsin, Airchester, Freedon, St. Roux, Wythern, Astoria, Elecna Bay, Itomori, Falloway, Daneburg, Waverly, Espil, Xandar-Vekta, Storalisburg, Spring Valley, Wazamawazi, Armada, Konawa and Lanark.

The line was built by _MajorMagpie_ with assistance from _frozen. 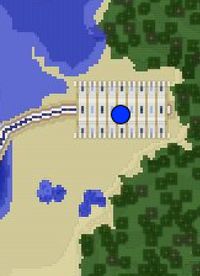 The Northern Line on the MRT Dynmap.

The Northern Line runs from  NW41  Foobar Ryuko at Ward 8 to  NE18  Titsensaki at Ward 2 via  N0  Foobar while serving the northern territories of Wards 8, 9, 1 and 2. Cities along the line include Carnoustie, Larkspur, Pine Mountain, Stoneedge, Quiris, Liten, Creeperville, Ravenna and Titsensaki.

The line was built by CortesiRaccoon and AP_Red. The line is slated for future extensions.

The Eastern Line runs from  EN37  Verdantium Harbour at Ward 2 to  ES26  South Pearl Coast Station at Ward 4 while serving the eastern territories of Wards 2, 3 and 4. The duration to travel along the line's 64 stations is approximately an hour. Cities along the line include Verdantium, Airchester, Marblegate, Lakeview and Pearl Coast.

The line was built by chiefbozx, just_robinho and AP_Red with assistance from soso123. The line is slated for future extensions.

The Jungle Line commences at  JN16  Foobar and from there goes southwards through Wards 2, 3, and 4, passing through  J0  Bawktown South (Upminster) and terminating at  JS38  Foobar. Stations on the line have their own unique entrances.

The line was built by AP_Red.

Indicated on dynmap in Juniper Green, the Savannah Line runs from  H1  Foobar to  H35  Foobar, interchanging with the Mesa, Desert, and Southern Lines. The line goes North-South and was approved per August 2018, after being proposed by HeavenAngel. The line was opened during the March 2019 GSM. It mainly serves the Savannah Large Biome in Wards 6 and 7.

The Southern Line serves the southern edge of Epsilon, running from  SW38  Foobar to  SE26  Foobar via  S0  Foobar. It passes through Wards 4, 5, and 6, acting as the southern terminus of other north-south MRT lines. Originally planned to be built further north near {{st/t|i|I20|c|C51}, relics of the old Southern Line can still be seen.

The Western Line runs from  WN30  Foobar to  WS1  Merced through  W0  Foobar. The line passes through Wards 7 and 8. The line is being extended southwards to  M54  Tembok through Chan Bay by chiefbozx.

The Lakeshore Line runs from  L1  Chalxior to  L36  Foobar, serving Wards 1 and 9. The portion of the line between  L1  Chalxior and  L14  Rank Resort was originally part of the Zephyr Line, but was renamed to allow the Zephyr to be extended further northwards.

The new portion of the line was built by godzilltrain in July 2020. 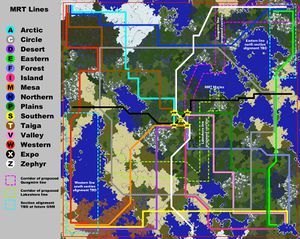 A map posted on the MRT Website in 2015 shows the cancelled lines and other future extension projects.

chiefbozx proposed two lines in 2014 and 2015 which have never been fully implemented.

First mentioned in January 2015 in a blog post written by Chiefbozx, the line was shown as a route alignment proposal in a map. The line was proposed to travel from Central NE and would cross Circle and Eastern lines before terminating at NE corner of the world. As of March 2016, no announcement was made by the staff about whether the line will be built or is cancelled.

The Lakeshore Line would be an extension of the Marina Shuttle beyond Merchant City. Part of this line has been found near  XE8  which includes only one station and a long 1x2 tunnel marking the planned route to  XE7 . The line would eventually be extended southwest, terminating in Daneburg or Falloway. However, most of the proposed corridor between Segville and Daneburg was constructed by RegionalConnect's GWR service which also serves Sealane, Utopia and Kolpino City along the way.